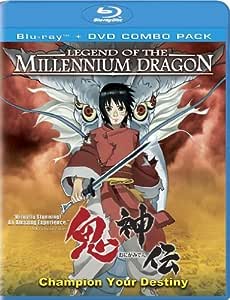 A spectacular journey of an unwilling young hero thrust into a mysterious past full of monsters, dragons, and strange hidden powers. Through a series of out of this world battles and adventures, Jun, a shy middle school boy, is transformed into a hero destined to battle evil and ensure harmony and tranquility in the world.

As Legend of the Millennium Dragon begins, Jun Tendo, a normal-seeming middle school student, finds himself transported a thousand years into the past, to the Heian period, where a ferocious war is being waged between the Nobles and the Oni. As a descendant of the Magatama clan, Jun "the Young Savior" can unseal the mighty dragon Orochi--and decide the conflict. The Oni are an ecologically minded people who fight in masks that give them the appearance of the oni, or demons, in traditional Japanese stories and art. The Nobles seeking to destroy them are led by Gen'un, a powerful and power-hungry monk. Everything rests on Jun's decision. Legend of the Millennium Dragon boasts handsome backgrounds and flamboyant special effects that suggest monsters, fire, water, and lava. But it lacks a coherent story. Characters appear and disappear before the viewer has a chance to get to know them or care about what happens to them. Even Jun remains underdeveloped and far less interesting than his counterparts in numerous other anime films and series--as does Mizuha, his romantic interest. The results are like watching a play through thick glass: its intriguing qualities feel distant and lack any sense of immediacy. (Rated PG-13: violence, grotesque imagery) --Charles Solomon