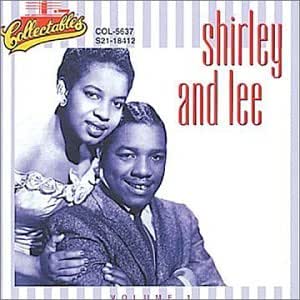 The same 20-track collection that Capitol deleted but shouldn't have, with the hits I'm Gone; Feel So Good; Let the Good Times Roll; I Feel Good , and When I Saw You .

4.2 out of 5 stars
4.2 out of 5
5 customer ratings
How does Amazon calculate star ratings?
Amazon calculates a product’s star ratings based on a machine learned model instead of a raw data average. The model takes into account factors including the age of a rating, whether the ratings are from verified purchasers, and factors that establish reviewer trustworthiness.
Top reviews

George O'Leary
5.0 out of 5 stars The Sweethearts Of The Blues
Reviewed in the United States on August 6, 2007
The above caption was hung on this young duo from New Orleans - Shirley Goodman (age 14) and Leonard Lee (age 15)- the minute they cut I'm Gone b/w Sweethearts in late 1952 for the Aladdin label. Backed by Dave Bartholomew & His Orchestra (legendary bandleader for Fats Domino, The Spiders, Lloyd Price, and Bobby Mitchell and a member of the R&R Hall of Fame) this was an instant success in the R&B market, going to # 2 early in 1953.

But then, shackled with the caption, they were handed one boy-meets-girl song after another and it wasn't until 1955 that they hit it big again with Feel So Good which, b/w You'd Be Thinking Of Me, also rose to # 2 R&B and, staying there for two weeks, chalked up 25 weeks on the charts (Johnny Preston would have a # 14 Hot 100 hit with the A-side in 1960, calling it Feel So Fine).

Their final hit on Aladdin came in 1957 with When I Saw You b/w That's What I Want To Do which reached # 14 R&B in the spring. Not long after the label folded and the duo hooked up with Warwick and then Imperial into the early 1960s before splitting up.

Listening to Shirley on cuts like Why Did I? and Confessin' it evokes visions of the great Little Esther Phillips, and the influence of the Fats Domino-style is clearly evident.

Two very influential artists and a worthy addition to your collection.

Edward Delaney
4.0 out of 5 stars Four Stars
Reviewed in the United States on November 1, 2014
brought back many memories
Read more
2 people found this helpful
Helpful
Comment Report abuse
See all reviews from the United States

Amazon Customer
5.0 out of 5 stars Five Stars
Reviewed in the United Kingdom on December 14, 2016
Verified Purchase
wicked cd of one of the best duos of all time
Read more
Helpful
Sending feedback...
Thank you for your feedback.
Sorry, we failed to record your vote. Please try again
Report abuse

Anthony
3.0 out of 5 stars Let the Good Times Roll is great.
Reviewed in Canada on April 15, 2015
Verified Purchase
My parents had an old compilation box set of songs and Shirley and Lee's "Let the Good Times Roll" was on it. I heard it a lot growing up, and when the album got lost, so did that song. We talked about it and reminisced one Christmas and I knew that I had to find it. I couldn't find the compilation album so I got the entire Shirley and Lee collection.
That song is still great, but Shirley's voice is rather high and may not be to everyone's taste. We play the song often, but rarely spin the whole CD.
Fans of the artists and the time period will definitely appreciate the extensive liner notes. They give a comprehensive account of both artists work, together and beyond. If you are already a fan, you wont' be disappointed. If you are not, this probably is not be the collection for you.
Read more
Helpful
Sending feedback...
Thank you for your feedback.
Sorry, we failed to record your vote. Please try again
Report abuse