Legends Of Belize Creature Book and millions of other books are available for Amazon Kindle. Learn more
Share <Embed> 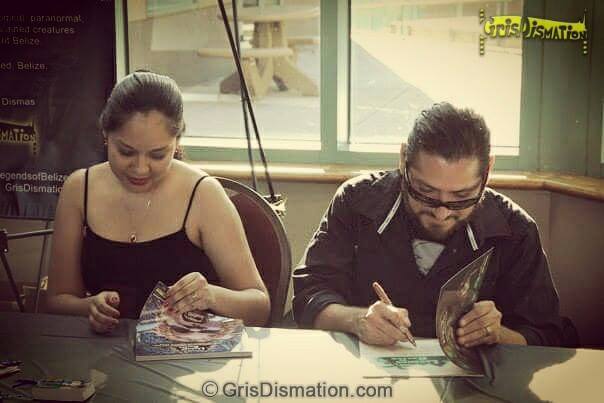 by Dismas (Author), GrissyG (Author)
4.6 out of 5 stars 10 ratings
See all formats and editions
Sorry, there was a problem loading this page. Try again.

"This is great stuff that is being done to preserve these parts of our history that is so important and vital for us."
-Rene Villanueva Sr., Radio and TV Journalist in Belize- Boogeymen TV series, Episode 213-Tata Duende
"...This latest presentation of Belize legends, myths, stories just proves how firmly they have remained in our universal psyche. What GrissyG and Dismas have done is to use the backgrounds to pinpoint the specific locations in Belize and that is so unique. This is a wonderful addition to our very limited collection of Belize-oriented literature."
-Araceli "Lita" Hunter Krohn, Belizean Educator and Historian
"I liked how you said one purpose for the existence of these characters is to make young and old more careful of how they live their lives and help them avoid troubles and horrors befalling them.  In that way the tales are similar to our nursery rhymes.  Your research seemed thorough and painted a picture of the mysterious and somewhat dark side of Belize's culture. Good work."
-Tom Tenowich, Writer/Producer of TV Series "Saved by the Bell" and "Mork & Mindy"
"Not only are the images amazing, the book serves as an invaluable reference source for Belizean Folklore."
-Debra Wilkes, Coordinator of Corozal House of Culture, National Institute of Culture and History, Belize
"It is a fine piece of work and very interesting. It is colorful also...Thanks for letting the world know about our culture through the internet."
-Judith Waldman, Elementary Teacher and Principal in Belize
"This is a most enlightening book of legends...a wonderful collaboration of art & narrative! Looking into an excursion to Belize."
-Kay Fields, Realtor, California

GrissyG and Dismas, artists, animators, and authors, born in Corozal Town, Belize, Central America, moved to sunny California to fulfill their dream to be artists. In 1999 they met at Los Angeles Mission College where they attended and graduated with an Associates degree in Art and Multimedia.

In 2003, GrissyG and Dismas, established GrisDismation, a signature to represent their collaborative work to produce Art, animation and books. In 2004 they married and continued their creative career in Art. Together as GrisDismation they produced a commercial for Archie Comics, an animated music video with Award winning Producer Garth Bacon, and storyboards/animatic for Award winning producer/director/filmmaker Dawn Westlake, plus many other projects. Always motivated to expand their avenues of Art, GrissyG and Dismas stepped into their first acting role in the film "Scrappy" produced by Dawn Westlake filmed in September 2016.

GrisDismation has produced series of paintings and over 20 short animations that have screened regularly atHollywood Shorts in Los Angeles. They have also authored two books,"Legends of Belize Creature Book" and "Legends of Belize, A Series AboutMythical Creatures That Dwell In The Jungles And Waters Of Belize." They have presented at Universities and schools in California and in Belize, been featured in the news, newspapers, on the radio and TV. Experts in the field of Belizean mythology, in 2015, GrissyG and Dismas were special guests in a documentary titled "Boogeymen, Tata Duende," about the Belizean mythical jungle gnome, produced by CMJ production II Inc. for the Travel andEscape channel. To continue document and expand on the Legends of Belize Art series and books, they are also currently producing an animated feature about the Legendary Tata Duende based on Belizean culture and mythology.
Start reading Legends Of Belize Creature Book on your Kindle in under a minute.

Kindle Customer
5.0 out of 5 stars Fascinating book — fabulously wonderful!
Reviewed in the United States on March 29, 2016
Verified Purchase
Love this book!!! Whether, or not, you're interested in these mythological creatures of Belize this is a great read and the art work is both strong and whimsical. LOVE this book!
Read more
Helpful
Report abuse

Mags
5.0 out of 5 stars Legends of Belize by Dismas and Grisssy G
Reviewed in France on July 22, 2016
Verified Purchase
If you grew up in Belize or just happen to know Belize you will love this book and if you don’t know yet this small country on the Caribbean sea this book will make you love it. It is the stuff legends are made of and as you cross the path of Tata Duende, Xtabai or La Llorona and get deeper into Dismas and Grissy G’s beautiful works you might find yourself looking over your shoulder or peering into the grass for some strange creatures that happen to be there. Art lover or just curious mind you will enjoy this book as you discover new artists and immemorial creatures.
Read more
Report abuse
See all reviews
Pages with related products. See and discover other items: mythology creatures
Back to top
Get to Know Us
Make Money with Us
Amazon Payment Products
Let Us Help You
EnglishChoose a language for shopping. United StatesChoose a country/region for shopping.
© 1996-2021, Amazon.com, Inc. or its affiliates