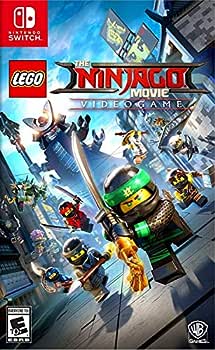 The LEGO NINJAGO Movie Video Game will allow players to delve into the world of the new big-screen animated adventure The LEGO NINJAGO Movie. In the game, players battle their way through waves of enemies with honor and skill as their favorite ninjas Lloyd, Nya, Jay, Kai, Cole, Zane and Master Wu to defend their home island of Ninjago from the evil Lord Garmadon and his Shark Army. To do so, they must master the art of Ninjagility which allows them to traverse Ninjago by wall-running, high-jumping and battling the foes of Ninjago to rank up and upgrade the ninja’s combat skills. Players can harness the power of Spinjitzu combat to defend Ninjago together.

Find your inner ninja with the all-new LEGO Ninjago Movie Video Game! Play as your favorite ninjas, Lloyd, Jay, Kai, Cole, Zane, Nya and Master Wu to defend their home island of Ninjago from the evil Lord Garmadon and his Shark Army. Master the art of Ninjagility by wall-running, high-jumping and battling the foes of Ninjago to rank up and upgrade the ninja's combat skills. Only in the LEGO Ninjago Movie Video Game will you experience the film across 8 action packed locations each with its own unique Challenge Dojo. And with the Battle Maps, play against friends and family in competitions for up to four players!

4.7 out of 5 stars
4.7 out of 5
895 global ratings
How are ratings calculated?
To calculate the overall star rating and percentage breakdown by star, we don’t use a simple average. Instead, our system considers things like how recent a review is and if the reviewer bought the item on Amazon. It also analyzes reviews to verify trustworthiness.

Alphalpha
5.0 out of 5 stars FUN FUN FUN... Get it so they make more and bigger ones!!!
Reviewed in the United States on September 26, 2017
Platform: Nintendo SwitchVerified Purchase
I have this on switch, and it is the best Lego game on it by far. No visible frame rate problems in gameplay yet.

This is one of the best lego games yet. Every time they come out with a new one, it is better than the last. Exploration and discovery factors well into this game. While it is not true "open world" like Lego City, the settings are expansive and non-linear. Different paths are made available at all points, and, once and area is complete, it begins to open up more places to go.

I have Lego City Undercover, Lego Worlds, Lego Batman 3, Lego Avengers, and others, and I will say, thus far, this is my favorite. It is making me look forward to upcoming Marvel Superheroes 2.

Lastly, this is not just a Movie copycat. It adds elements to the movie. I would say, what is most interesting is that together with the movie, the two create an entire universe.

Chuck McIntyre
2.0 out of 5 stars A potentially good game that's largely ruined by bad design
Reviewed in the United States on November 18, 2018
Platform: Nintendo SwitchVerified Purchase
I bought this to play with my young child who is obsessed with Ninjago. We installed the game, downloaded the update, and started playing. Then we waited for a while as the opening screen loaded. Still, the loading screen was entertaining with Hong Kong Action Cinema style features and we had a good time.

One we started the game (it took almost 10 minutes to get through the opening) a tutorial started. That's when things started to go down hill. My son is too young to play video games on his own, but in previous Lego games, we've been able to do cooperative local play. Unfortunately, the designers of Lego Ninjago made a few critical errors.
1. Co-op is split screen (side by side). I'd prefer no split screen, but if you have to, give me the option to use top/botton split screen!
2. The game does not work with the nintendo switch's mini controllers. There are literally no controls for camera movement in this mode. This is a requirement for me since only the small controllers fit in my kid's hands.
3. Loading wait times! WTH?! Between every level and some cinema screens it takes between 3-5 minutes. If you are trying to do back-and-forth to figure out secrets, this is just unambiguously bad.

Still, it has some redeeming features, when you do play in some levels (like the mecha levels) you can share the screen. The voice acting is fun, and the dialog is mostly movie true (and therefore funny).

Ultimately would not recommend this game for a Nintendo Switch. Maybe on other consoles it's better?
Read more
10 people found this helpful
Helpful
Comment Report abuse

H. Longfield
5.0 out of 5 stars You don't even have to open it to have fun!
Reviewed in the United States on June 18, 2018
Platform: Nintendo SwitchVerified Purchase
Bought this as a birthday gift for my nephew. I didn't know at the time that he had his Switch taken away from him for bad behavior. His face when he opened his new game was priceless. He carried this game around with him everywhere; he even slept with it like it was a teddy bear...and when he was finally allowed to open it, it became his favorite game. Would buy again 👌🏻
Read more
16 people found this helpful
Helpful
Comment Report abuse

Simon The Great
5.0 out of 5 stars Great addition to the Lego Family of Games
Reviewed in the United States on October 3, 2017
Platform: Nintendo SwitchVerified Purchase
We are a family of Lego fanatics. We are a Nintendo family as well, so seeing a Lego game on the Nintendo Switch was an auto-buy. That being said, we have really enjoyed this game. It has a unique playing style to other lego games where the action becomes a little more involved, but not confusing or difficult to handle. We have put about 20 hours into it, no freezes and no crashes. We have not yest tested the battle area; preferring to play through all the boards first. Age appropriate and of course the humor associated with Lego games in general. If you are a fan of episodic Lego adventures, this provides a good deviation with some exciting new additions that makes it feel fresh and fun.
Read more
22 people found this helpful
Helpful
Comment Report abuse

Brandon
1.0 out of 5 stars Very Glitchy Especially on 2 Player
Reviewed in the United States on April 30, 2020
Platform: Nintendo SwitchVerified Purchase
My 5 year old saved his money for this game. We only let him buy/play multiplayer games so we can play as a family. We love other Lego games (Harry Potter, Lego City, Marvel, etc.). Since he loved the Ninjago movie he was so excited for the game. It is so glitchy! It crashed the first 10 minutes of playing. He was playing with his dad, but it seems it can't handle two playera and they got to a point where it was glitching so bad they could not progress through the game. Very disappointing for a Lego game. They should not release a game that doesn't work properly. I feel like they released it just to make more money off the movie, and did not hold it to any quality control. Don't waste your money on this one!!!
Read more
3 people found this helpful
Helpful
Comment Report abuse

Customer
4.0 out of 5 stars Quick game
Reviewed in the United States on November 9, 2018
Platform: Nintendo SwitchVerified Purchase
My son liked the game. He did get to the end in just a couple days...It does not take long to get through all the levels. He is now going back and trying to uncover more characters and bricks.
Read more
5 people found this helpful
Helpful
Comment Report abuse

Ale
2.0 out of 5 stars Heeeeelp
Reviewed in the United States on August 21, 2018
Platform: Nintendo SwitchVerified Purchase
The reason I give two star it's because the game it's been used for two days and it's get stock in the level were the jungle is and start glitch I try and remove the game from the console , I turn off and on the console, no result it keeps getting stock , I try a different game and works perfectly so it's no my console it must be the game , any help.
Read more
4 people found this helpful
Helpful
Comment Report abuse

Dale R.Top Contributor: Action Figures
5.0 out of 5 stars Fun Game!
Reviewed in the United States on November 21, 2018
Platform: Nintendo SwitchVerified Purchase
My daughter loved the Ninjago movie, and this game was a lot of fun for her to play. These LEGO style game are always such fun, and it's incredibly clever with some of the game mechanics. The story of the game expounds some more on the movie characters, and offers some nice alternatives as well. Overall it's a fun game, and one I'd recommend if you enjoyed the film as well.
Read more
3 people found this helpful
Helpful
Comment Report abuse
See all reviews