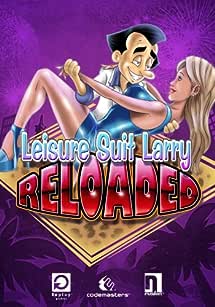 Brand: Replay Games
Platform : Windows Vista, Windows XP, Windows 7 |
Rated: Teen
| DRM:
2.5 out of 5 stars 38 ratings
Currently unavailable.
We don't know when or if this item will be back in stock.
Note: After purchase, you can access the item in Your Games Library.
By placing your order, you agree to our Terms of Use.
This product is non-returnable and non-refundable.
Note: Currently, this item is available only to customers located in the United States.
Download size: 100 MB
Download time: 16 seconds on broadband, 4 hours, 3 minutes, 48 seconds on dial-up

Leisure Suit Larry is one of the most iconic characters in the history of computer gaming. The game follows the life of Larry Laffer, a loveable loser who is a balding, dorky, double entendre-speaking, leisure suit-wearing ""lady’s man"". The games follow Larry as he spends much of his life trying, unsuccessfully, to seduce attractive women.

The first game in the series, Leisure Suit Larry in the Land of the Lounge Lizards, was first published in 1987 and helped build the Sierra On-Line dynasty. Featured in a score of original software titles since then (not even counting numerous anthologies, repackagings, and cameo appearances), the series’ namesake hero, Larry Laffer, is a bumbling, persistent everyman who just wants to be loved. Is that so wrong?

With the help of Al Lowe, Larry’s progenitor and designer of all of Larry’s classic adventures, Replay Games is remaking the landmark first game for an entire new generation (or two!). Expanded and enhanced in every detail and ready for both mobile devices and PCs, Larry is being reborn for the players who might’ve seen their parents (or grandparents!) playing Larry behind closed doors.

Over 3,000 frames of hand-drawn animation!

Fully voiced by the actors who originated the roles