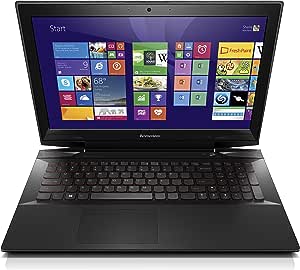 The Lenovo Y50 is a high-performance notebook combining a Full HD resolution display with features like premium audio, latest processor and graphics technology, making them ideal for gaming.

Amazon.com Return Policy:You may return any new computer purchased from Amazon.com that is "dead on arrival," arrives in damaged condition, or is still in unopened boxes, for a full refund within 30 days of purchase. Amazon.com reserves the right to test "dead on arrival" returns and impose a customer fee equal to 15 percent of the product sales price if the customer misrepresents the condition of the product. Any returned computer that is damaged through customer misuse, is missing parts, or is in unsellable condition due to customer tampering will result in the customer being charged a higher restocking fee based on the condition of the product. Amazon.com will not accept returns of any desktop or notebook computer more than 30 days after you receive the shipment. New, used, and refurbished products purchased from Marketplace vendors are subject to the returns policy of the individual vendor.
Product Warranty: For warranty information about this product, please click here [PDF ]
Customer Questions & Answers
See questions and answers

3.6 out of 5 stars
3.6 out of 5
100 customer ratings
How does Amazon calculate star ratings?
Amazon calculates a product’s star ratings based on a machine learned model instead of a raw data average. The model takes into account factors including the age of a rating, whether the ratings are from verified purchasers, and factors that establish reviewer trustworthiness.

TinMan
1.0 out of 5 stars From Beautiful to Bricked: My Lenovo Story
Reviewed in the United States on December 10, 2015
Verified Purchase
Okay. Get ready for a fun story.

I purchased this laptop in January of 2015 and it worked wonderfully for quite some time. It ran high-end games near perfectly, and the Adobe Creative Suite worked at pretty high speeds.

However, come July, the hard drive crashed completely, rendering the computer completely unusable. I couldn't even boot it as Windows was installed on the hard drive. I called Lenovo support to have them guide me through a fix, which lead to using their "One Key Recovery" button, wiping everything and starting over.

A few months passed, and the computer was struggling to match the speed and reliability it had before its unfortunate computer stroke. The system was running the disk at 100% about 90% of the time, even when I wasn't running any programs. Then, one ordinary October day, the computer stopped running any programs. Every time I tried to launch a game or an Adobe program, I would get an error message about the graphics card either failing or not being "up to date". I checked several times, updating it and reinstalling drivers. Same message. Programs would either start, then crash, or they'd freeze the computer entirely.

By this point I was pretty upset. Being halfway through the semester as a Digital Film major and not having a computer to edit on is beyond inconvenient. I called Lenovo tech support to see if I could have the laptop shipped to them for repairs. After all, I was still under warranty for another 4 months or so. The first phone call was unsuccessful. They tried dodging around it, saying I needed to go through Amazon to go through them to return it. After the phone call, I contacted Amazon. Luckily, they were just as confused at the situation as I was. They told me that because the warranty was through them that I should be able to return it through them. Thank you, Amazon!

I called again, and this time was able to get Lenovo to accept having it shipped for repairs. They even offered to pay for shipping. Finally! So I sent it in, and within the next week I got it back. The official repair checklist said they replaced the hard drive, motherboard, CPU, etc. The computer looked better than it did before I sent it in! Unfortunately, this was as good as it got.

When I restarted the computer and set everything up again, the same problems occurred, but even worse this time. Many programs wouldn't even start, and would freeze the system when I clicked on them. Simple programs like Microsoft Word only ran at half speed. I thought maybe this was just a problem with the operating system itself, or maybe even my own files? I upgraded to Windows 10 to see if it fixed the problem first. Nope. Even worse. More freezing, and sometimes not even in a program. Just booting the computer caused it to crash. So I once again "One Key Recovery'd" the computer, wiping it clean of any files and resetting the OS to Windows 8.1. Trying basic programs and files already installed on the system caused the same issues. Trying to update the computer didn't work either. Windows Update froze several times, and would corrupt when trying to install.

In the end, I'd say this is a wonderful computer, if you only need one for six months. After that, you're left with a lovely glowing brick. Lenovo's customer support and repair centers aren't great either. Perhaps I just got a dud? Maybe. But I doubt it. Even after the repair center replaced most everything and put their stamp of approval on it, it was worse than before. My guess is that they're either waiting for my warranty to expire, or their quality computer-building standards are very low.

A great $900 waste of time and money. Beautiful for any film set not requiring a functioning device.

egorre
4.0 out of 5 stars great laptop for the money
Reviewed in the United States on January 25, 2015
Verified Purchase
great laptop for the money. a lot of bloatware to delete but it's windows, so it's to be expected. windows 8.1 is designed for touchscreens so maybe it won't be that bad if the laptop was actually touchscreen. this laptop is definitely for tech challenged user. the user friendliness is just not there. be ready to learn a whole new OS upgrading from Windows 7 down to windows 8.1. if you had a windows phone, switching should be easy. if you are an android user and dependent to Google services, windows store is not for you. same if you are dependent with Apple services. windows store is severely lacking apps found on apple or android devices, so homescreen tiles (which is the main selling point of a windows 8+ laptops) is virtually useless. you'd just be back with desktop mode. I repeat, no Google services or Apple apps have a windows app store version not even YouTube. the display screen looks washed out. I tried everything but it still looks washed out compared to my previous $300 dell laptop. Wi-Fi is so slow I don't know why. I've tried updating drivers to no avail. overall I'd say spec wise, design and performance, this is the best sub $1000 laptop you can get. that beautiful backlit keyboard is a huge plus.
Read more
Helpful
Comment Report abuse

NickSaban
1.0 out of 5 stars BUYER BEWARE: Fatal design defect will cause laptop to break
Reviewed in the United States on June 17, 2016
Verified Purchase
If you are considering buying this laptop, please do one of two things: (1) Don't; or (2) Do some Google research on the design defect with the left hinge. In short, the left hinge (left if you're looking at the screen) is way too tight. As a result, every time the laptop is opened and closed, a tremendous amount of pressure is put on the screws securing the hinge to the screen. It is simply a matter of time before this excess pressure causes the plastic on the screen to snap and the hinge to break free from the screen.

In my case, the hinge broke free right after I got outside the 1 year warranty period. This is despite the fact that my Y50 saw very light use.

Lenovo is fully aware of this defect, yet refuses to take responsibility for it. If you are outside of warranty, you're looking at a $300 charge to repair it. Even if you are in warranty, there are stories of Lenovo refusing to cover it.

I wish I had bought one of the other laptops I was considering at the time of this purchase. I will NEVER buy another Lenovo product, period.
Read more
Helpful
Comment Report abuse
See all reviews from the United States

Amazon Customer
5.0 out of 5 stars Works like a charm
Reviewed in Canada on January 7, 2017
Verified Purchase
Got this laptop 2 years ago. Works like a charm. Very durable. Love the red glow on the keyboards. Even after 2 years, it still works like it did on the very first day i used it. Great sound quality as well.
Read more
Helpful
Sending feedback...
Thank you for your feedback.
Sorry, we failed to record your vote. Please try again
Report abuse

Eliminator
4.0 out of 5 stars Four Stars
Reviewed in Canada on August 22, 2015
Verified Purchase
Works great for a $1000 gaming laptop, but does not come with a DVD rom.
Read more
Helpful
Sending feedback...
Thank you for your feedback.
Sorry, we failed to record your vote. Please try again
Report abuse

See all reviews from the United States
Pages with related products. See and discover other items: 860m laptop, best i5 laptop, best gaming laptop under 1000, best i5 processor