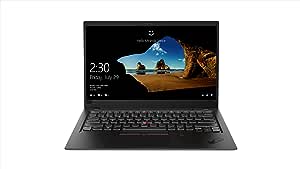 Climate Pledge Friendly
Available at a lower price from other sellers that may not offer free Prime shipping.

Buy this product as Renewed and save $397.00 off the current New price.

Up to 15 hours of battery life and multi-touch screen —along with RapidCharge technology—keep you on-task wherever the road leads.

Prepare to be thunderstruck

The ThinkPad X1 Carbon includes Intel Thunderbolt 3—the technology that brings lightning-fast data transfer, up to 40Gbs to USB-C. You can also connect a cable from your USB-C port to a Thunderbolt 3-enabled device, and get four times the data and twice the video bandwidth of any other port type, while also supplying power. So you get Thunderbolt, USB 3.0 data transfer, and DisplayPort all rolled into one.

Built to go on and on. And on.

Like all ThinkPads, the X1 Carbon is tested against 12 military-grade requirements and more than 200 quality checks to ensure they run in extreme conditions. With a chassis constructed of four layers of reinforced carbon fiber and a magnesium alloy roll-cage for added strength, you’ll trust this laptop to handle whatever life throws your way.

Quickly log in with ease with Windows Hello using just the touch of your finger. What’s more, the fingerprint reader thwarts biometric hacking with anti-spoofing technology— the fingerprint image is saved inside the chip, so it’s not sent out for login authentication when you sign in. Your data is protected too, with the discrete Trusted Platform Module (dTPM), that encrypts your information. And if that’s not enough to make IT administrators love the new X1 Carbon, then the ThinkPad’s FIDO authentication capability is sure to have them drooling.

Minimize concerns about being watched or inadvertently turning on the webcam with the new ThinkShutter. This built-in sliding cover ensures front-facing camera privacy and security with the HD camera. It's easy to use and delivers strong protection.

4.2 out of 5 stars
4.2 out of 5
37 global ratings
How are ratings calculated?
To calculate the overall star rating and percentage breakdown by star, we don’t use a simple average. Instead, our system considers things like how recent a review is and if the reviewer bought the item on Amazon. It also analyzes reviews to verify trustworthiness.
Top reviews

Farzal
2.0 out of 5 stars Heats too much & poor battery life
Reviewed in the United States on July 28, 2018
Verified Purchase
This might be the one of the lightest and unbreakable laptop. Slow clap. But it has major issues

1) This version, despite being priced at $2,100 (versus others priced at 1600-1800) does not have SIM slot o Micro SD slot.
2) There are major heat and noise issues with the laptop. I have been getting weekly BIOS updates and none has resolved the issue.

2a) When connected to charger:
Using Hardware monitoring tool, I can see that even under normal usage of Office applications, the laptop is over clocking to above 3 GHz (instead of staying below, much much below even the 2.0 GHz. No amount of configuratin in BIOS or even using Intel's XTU (Extreme Tuning Utility) has resolved the over clocking.

As a result, the temperate is always between 60-70C and results in fan running nearly all the time.
This will also significantly reduce the life of laptop.

2b) When not connected to charger,
There is no over clocking (Good!) but CPU still keeps running at almost full power of 2.0 GHz and this reduces battery life to barely 4 hours (screen brightness 80).

Both 2a and 2b point to crappy software by Lenovo and crappy updates that have failed to make any dent.

Luciana Wasum Carvalho
5.0 out of 5 stars Great performance and design
Reviewed in the United States on September 2, 2019
Verified Purchase
Lenovo X1 Carbon 6th Gen looks amazing. At a first glance, the sleek black lid with X1 and ThinkPad logos make quite an impression. Once you connect the power charger, a small dot in the ThinkPad logo lights off. A nice touch. And a godd thing is that fingermarks don't stick that much on the matte finish of the lid.
The keyboard is the most impressive feature in this machine. I previously had an Yoga 3 Pro, with a decent keyboard. But this one is amazing. Response, height, size, it all make for the best keyboard I've ever seen in a laptop.
My machine (Intel Core i7 8thGen vPro, 16 GB RAM, 512GB SSD, Windows 10 Pro, 20KH002JUS model) starts in seconds. Faster than my old Samsung Tablet. It is so fast to start and shut off that I no longer just close the lid. I put it on Hibernate mode.
Login became much faster due to the fingerprint reader as well. Just a touch in the reader and I'm logged in. One thing that my Yoga 3 Pro had, and it really bugged me, was a delay on connecting the wireless adapter. Every time I'd start the laptop - or wake it up from Hibernate - I had to wait a while for it to get the wireless on. With the X1 Carbon, it's instantaneous.
Screen resolution on my old Yoga was higher than on the X1 Carbon, but that was a choice I made. The screen on the Yoga was brighter and looked better as well. You can get higher res models (mine is 1920 x 1080), but I chose the Full HD version in order to be able to connect an outside monitor without the need to adjust the resolution on the laptop screen - which also bugged me on the Yoga 3 Pro.
I read some people complaining about fan noise before I settled for the X1 Carbon. When in full speed, it is noisy, but there is so much power available on the machine that it rarely goes full speed. Even running PowerBI graphs and dashboards, it rarely reaches a point when I hear the fan. When I was configuring the system, installing my stuff and things like that, I heard it. It is a bit noisy, but you will only hear it once in a while, when the processor is being highly demanded.
The charger is not too big, and for those who need carry the laptop around - my case - it is not a nuisance. The whole thing - computer and charger - are light enough to travel well. And, for the daily activities you can even chose to leave the charger at home. Unless you plug a lot of stuff on the computer, the battery will last a full work day. I've been using mine for more than five hours, on and off, today and still has 46% of juice left. Not bad at all. Yoga would be at 20~25%.
Touchpad is good enough and if you want, there is always the red thingy (not sure what to call it) in the middle of the keyboard. Never got used to it, even in the old days, when IBM ThinkPads had only that to move the pointer. There are three buttons, for those who like to click things, rather than just do multi finger moves on the touchpad.
Over all, despite being an expensive machine, X1 Carbon is a great computer. Hope it lasts even more than my Yoga (four years and still working well, just a bit outdated). I recommend for users who need processing power and a light computer to carry around.
Read more
4 people found this helpful
Helpful
Report abuse

David P
4.0 out of 5 stars Great light weight Business Laptop
Reviewed in the United States on January 9, 2019
Verified Purchase
Whether you use this laptop as a business or personal laptop it won't matter. The only reason you wouldn't make it your first choice as a personal laptop is the price. But if that is not an object and you demand a great laptop, the Lenovo ThinkPad X1 Carbon is the best choice. The only think I really find needed an improvement is the Fingerprint reader, it is very slow to recognize the print. My phone fingerprint reader works 10 times better. The only other think I would like to see was more options when selecting a touchpad monitor. Yes, I would recommend this laptop.
Read more
7 people found this helpful
Helpful
Report abuse

Amazon Customer
5.0 out of 5 stars Love my X1 Carbon
Reviewed in the United States on June 27, 2019
Verified Purchase
I watched videos that talked about how good the keyboard feels. They were right. Replaced my macbook air with this X1 Carbon. Using it for work and personal use. Very happy
Read more
4 people found this helpful
Helpful
Report abuse

William Clune
5.0 out of 5 stars there is a really good reason why
Reviewed in the United States on August 22, 2018
Verified Purchase
Lenovo Thinkpads cost more money... there is a really good reason why. THEY ARE BETTER and Worth the Extra pennies!! Super Fast, i myself appreciate the lenovo update tool, it even keeps the bios up to date! Very well made, solid device.
Read more
5 people found this helpful
Helpful
Report abuse

HELLESBELLES
2.0 out of 5 stars No base warranty
Reviewed in the United States on October 30, 2020
Verified Purchase
I have purchased lenovo laptops for years and usually add an extended warranty after purchase. These laptops do not come with a base warranty and Lenovo will not add them. This means you will not be able to extend the warranty at standard prices. You will have to pay for a "post warranty" which is more expensive and is only available for 1 or 2 years.
Read more
Helpful
Report abuse