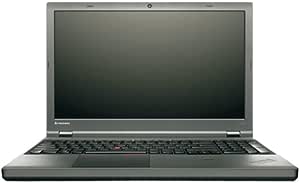 Performance, efficiency and durability make the T540p the corporate laptop workhorse that sets the performance benchmark. With its award winning keyboard, HD display and ultra long battery life the T540p will be with you every step of the way, wherever your business takes you.

3.6 out of 5 stars
3.6 out of 5
30 global ratings
How are ratings calculated?
To calculate the overall star rating and percentage breakdown by star, we don’t use a simple average. Instead, our system considers things like how recent a review is and if the reviewer bought the item on Amazon. It also analyzes reviews to verify trustworthiness.
Top reviews

Paul50
3.0 out of 5 stars I can't believe it is a Thinkpad T!
Reviewed in the United States on September 30, 2014
Verified Purchase
I can't believe this is a Thinkpad T series laptop. My last Thinkpad was T42. The feel was unbreakable and it actually was. It survived several accidental drops, including once from fast riding bike.
Since then I have been recommending Thinkpad T to everyone I know. My friend bought a T430 not long ago with my help. It still felt very good.
This one, however, feels cheap (kind of plastic) and looks (screen resolution) cheap.
And the greatest surprise is that I cannot feel it faster than my C2D 1G memory windows XP laptop. It will become slow when you turn on several programs. I will try to add another 4G memory to see the difference.
Generally, I am disappointed although I still wish it is very durable.
Read more
3 people found this helpful
Helpful
Report abuse

RF52
3.0 out of 5 stars Okay laptop with very poor touch pad
Reviewed in the United States on December 16, 2014
Verified Purchase
It's a decent laptop. The problem is the touch pad; clunky and annoying. Pure junk. Otherwise, it has the traditional old style docking port on the bottom, plenty of USB ports, and has run without a glitch. It has plenty of spunk, but is not intended, nor would it make for a good gaming system. It seems like it has the traditional Thinkpad ruggedness. Just remember to get a portable mouse and turn off the touch pad. It will serve it's intended purpose. I would buy this unit again.
Read more
2 people found this helpful
Helpful
Report abuse

PoodleDoodleMama
2.0 out of 5 stars Slippery keys, frustrating touch pad
Reviewed in the United States on October 12, 2015
Verified Purchase
I returned this computer. I found the keys too slippery for my style of typing (I'm a touch-typist, not a pounder) but what really did it for me was the touch pad.

Despite hours invested in trying to learn how to use the it (searching on line for help, watching videos about it and trying to implement), it remained a frustrating mystery.
Read more
One person found this helpful
Helpful
Report abuse

Ruan
5.0 out of 5 stars it is easily mastered after continuous usage
Reviewed in the United States on July 27, 2015
Verified Purchase
This laptop delivered the exceptional qualities I expected from Lenovo. Even though the touch pad might be a little intricate for some users, it is easily mastered after continuous usage. The build quality and upgradable hardware makes it very easy to transcend to know performance. I am currently using a wireless mouse which makes it easy very easy to take the place of my desktop. So overall I can't complain, it's one of the best laptops out there in the I5 range. It's unparallel compare to price per value.
Read more
One person found this helpful
Helpful
Report abuse

William Miller
5.0 out of 5 stars excellent
Reviewed in the United States on March 4, 2015
Verified Purchase
EXECUTIVE SUMMARY:
As of february 2015, I wholeheartedly believe that this is the best laptop under $600. It is future proof, upgradeable, has a solid build quality, and great connectivity.

QUICK NOTES:
The laptop I received did not have the superfish malware installed.

I have not seen vendors mention that this model has bluetooth, an expresscard/34 slot, or an empty M.2 slot (for WWAN/SSD).

Trackpad- I saw a lot of reviews hating on the trackpad, and planned on using a mouse with this computer. Long story short, its by far the best trackpad I've ever used, but if I didn't look up how to use it I would be very frustrated with it.

GPU not suitable for serious gaming (not a concern of mine)

Upgradable- The CPU is NOT SOLDERED to the motherboard. It can be replaced with quad-core i7 parts with several times the performance of the i5-4200m. The RAM can be upgraded to 16gb. It should be possible to add a backlit-keyboard or FHD display, though I have not looked into this.

Ports- In addition to the 2 usb 3.0 ports, this laptop has an expresscard 34 slot, an unused M.2 slot (with WWAN antennae pre-wired), and a multimedia card reader. The cd/dvd tray can be replaced with a SATA tray for storage devices. The MDP interface can be converted to HDMI. Really the only ports you will be unable to emulate going forward are USB 3.1 and thunderbolt.

Screen- I was initially shocked by the appearance of the screen in windows 7. I tried to raise the resolution, only to find it at the maximum. Turns out the icons were upscaled by default. The screen looks great and gets very bright when needed. I'm not a huge monitor geek but it appears to have good viewing angles and color gamut. I also do not have problems with glare in the same locations that my prior laptop struggled with.

Human Interface- I probably would be lost if I didn't read up on how to use the trackpad, as it differs pretty substantially from other trackpads. It has no edge buttons, but rather the whole pad is one clickable button. You get r/m/l clicks depending on where you click. Taps also emulate clicks. Different actions can be triggered depending on whether you clicked or tapped, and how many fingers you used. Scrolling can be achieved a variety of ways (including with the trackpoint). The trackpad also supports gestures (up to 10 point multi-touch.) I have not tweaked the trackpad on linux to get it functioning in exactly the same way is does on windows, although thats mainly because it works very well 'out of the box' on kubuntu. The TrackPoint is similarly great, and really brings out the best of the trackpad. If you are a 'hunt-and-peck' keyboardist you will probably never use the trackpoint. Keyboard is very nice, although I have limited experience with high-end keyboards.

Linux- Every device worked with kubuntu. I've had many a laptop that had display or wireless issues, but everything was working perfectly from the first boot.

BIOS- Although BIOS is something most people care very little about, I was very happy with the T540p's BIOS. As a multi-boot user, I have had many frustrating run-ins with UEFI. This BIOS allows you to toggle legacy and/or UEFI boot off, switch which order they are tried in, and allows you to switch into a windows 8 compliance mode.

Performance- The Win7 install that shipped with my machine was slightly slower than what I would expect of a laptop with these specs. A few vendor-crapware uninstallations later and I was sailing smooth. I then installed both windows 10 technical preview and kubuntu 14.10, which performed excellently.

Battery- This uses a haswell processor, so the CPU draws significatly more power (37w TDP vs 13w TDP) then the latest-generation intel mobile CPUs (the new broadwell parts are soldered to the socket, which is a deal-killer for me as I intend to upgrade the CPU later). However, lenovo packs a big ass battery in there, and you can get the 57++ which will give you apx. double battery life. For low-light web browsing I have gotten ~8 hours. I've never done a drain-test, but it seems like you should be able to get 3.5-4 hours watching an HD movie or playing a game with middling brightness.
Read more
6 people found this helpful
Helpful
Report abuse

Mohamed Radwan
3.0 out of 5 stars very bad touchpad
Reviewed in the United States on December 16, 2014
Verified Purchase
very bad touchpad , previous thinkpad T series was much better then this one .
Read more
One person found this helpful
Helpful
Report abuse

See all deals
Page 1 of 1 Start overPage 1 of 1
Previous page
Next page
Pages with related products. See and discover other items: thinkpad laptops
Back to top
Get to Know Us
Make Money with Us
Amazon Payment Products
Let Us Help You
EnglishChoose a language for shopping. United StatesChoose a country/region for shopping.
© 1996-2021, Amazon.com, Inc. or its affiliates