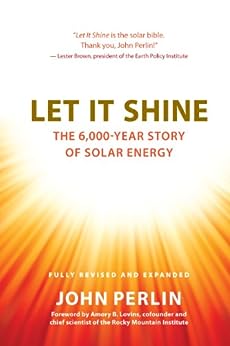 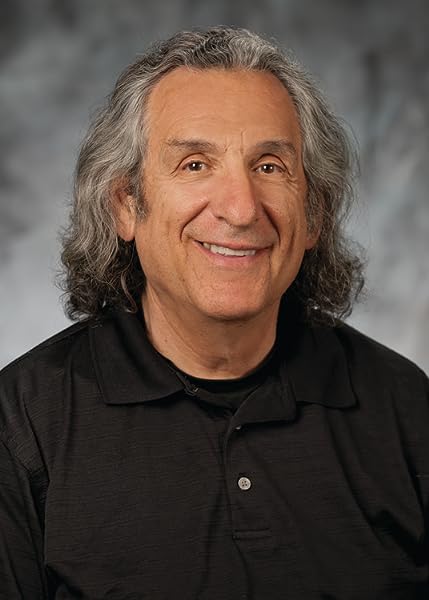 by John Perlin (Author), Amory Lovins (Foreword) Format: Kindle Edition
See all formats and editions
Sorry, there was a problem loading this page. Try again.
Read more Read less
Previous page
Next page
Due to its large file size, this book may take longer to download

An international expert on solar energy and forestry, John Perlin has lectured extensively on these topics in North America, Europe, Asia, and Australia. Perlin is the author of A Forest Journey: The Story of Wood and Civilization as well as From Space to Earth: The Story of Solar Electricity. Perlin mentors those involved in realizing photovoltaic, solar hot-water, and energy-efficiency technologies at the University of California, Santa Barbara (UCSB), and coordinates the California Space Grant Consortium as a member of UCSB’s department of physics.
--This text refers to the hardcover edition.

“Let It Shine is the solar bible. Thank you, John Perlin!”
— Lester Brown, president of the Earth Policy Institute

“John Perlin is the historian of solar energy. He now takes the history back thousands of years to early Chinese architecture and the yang-sui, the little bronze mirrors boys used to start the family fire, to nineteenth-century inventors who feared that coal supplies were about to run out, to modern passive solar buildings and today’s falling costs and growing use of photovoltaics. He does all this with a penchant for the diverse characters along the journey and with remarkable illustrations that vividly capture the six-thousand-year story of solar energy.”
— Daniel Yergin, Pulitzer Prize–winning author of The Quest: Energy, Security, and the Remaking of the Modern World and The Prize: The Epic Quest for Oil, Money, and Power

“With remarkable depth, breadth, and precision, John Perlin lays out humankind’s long reliance on the sun before the carbon era and points the way to a healthy, comfortable, productive, resilient solar-powered world. There is more intelligence and common sense in this volume than in all the federal reports on energy of the last quarter-century combined.”
— Denis Hayes, former director of the federal Solar Energy Research Institute and founder of the Earth Day Network

“The authoritative background story behind the worldwide solar revolution, Let It Shine is a story of human ingenuity and perseverance told with clarity and depth. The next chapter is ours to write.”
— David W. Orr, professor of environmental studies and politics at Oberlin College and author of Down to the Wire: Confronting Climate Collapse

“Let It Shine makes it abundantly clear that solar energy has a long and glorious past — a prologue, in fact — that is as bright and diverse as its future will be. Far from being a disruption of the current energy economy, solar power can be harnessed in thousands of ways, making it easy to embrace and integrate into our future, as this book brilliantly demonstrates.”
— Daniel M. Kammen, distinguished professor of energy at the University of California, Berkeley

“Let It Shine shows how today’s renewable revolution builds on the tenacious efforts of countless generations of innovators whose vision we may finally be privileged enough to bring to full flower.”
— from the foreword by Amory Lovins, cofounder and chief scientist of the Rocky Mountain Institute

Praise for A Golden Thread, the previous edition of Let It Shine:

“An absolute must-read.”
— Alexis Madrigal, senior editor at The Atlantic and author of Powering the Dream

“Western man has been using the sun’s rays for useful purposes since the days of ancient Greece, as this comprehensive, carefully researched, clearly written history of solar architecture and technology makes abundantly clear. The illustrations and diagrams that illuminate the text on almost every page are especially fine examples of modern graphic presentations.”
— New York Times

“It is a humbling book. Handsomely illustrated and lucidly written, A Golden Thread is a rich mine of information.”
— Los Angeles Times

“The history of mankind’s efforts to use the sun’s energy is a fascinating story, one told in a lively yet scholarly manner here....The triumphs and defeats of solar pioneers help us appreciate what a solar future may yet hold.”
— Christian Science Monitor

“This book is sorely needed in the solar publication field, for although there are any number of how-to books on solar technology, few if any examine the history of this much-neglected energy source in any depth.”
— Denver Post

“I just happened to be carrying A Golden Thread in my suitcase at Princeton. On my way home, I devoured it. Richly illustrated and thoroughly documented, it is a feast for the most critical historian’s mind and eye.”
— Technology Review
--This text refers to the hardcover edition.

Bill Henderson Jr.
5.0 out of 5 stars Not a Bunch of Hippie Nonsense
Reviewed in the United States on July 14, 2017
Verified Purchase
What a great book! Perlin walks you through man's discovery and rediscovery of passive solar building practices over the last six thousand years. It's essentially a history of how we've used solar energy for a long time to warm our homes and heat water for our homes, and into recent history with photovoltaics and solar thermal. After you read the book you'll look at architecture and city layout differently (unless you're already a passive solar fan). There's nothing controversial in the book - Perlin doesn't get negative. He really just points out the obvious, which people have forgotten over and over again.

The book's cover makes it look like a hippie manifesto, but it's not (there's nothing wrong with hippies). It's a book about the practical use of free energy in our daily lives. Highly recommended.

Windy Dankoff
5.0 out of 5 stars Enlightening!
Reviewed in the United States on December 17, 2015
Verified Purchase
Perlin’s original solar history, A Golden Thread was an inspiration to my solar career. Let It Shine digs deeper and wider into the past, and adds a major section on photovoltaics. Is there nothing new under the sun? Sure there is, but the development of successful solutions from the sun go WAY back. So do the follies. Perlin makes it all enlightening and amusing. Understanding the past helps us avoid classic mistakes, and gives a rich context to what we are seeing and doing now. I’ve read most of Perlin’s books. Even if they seem to be out of my field, I find them a first-class read. The man is a true, original historian, and a great storyteller who projects the big picture.

If you are in any way involved with solar energy, at any level (aren't we all?), you will be grateful to have this book, if only for the adventure.

Pat
5.0 out of 5 stars Really, Really Interesting!
Reviewed in the United States on November 22, 2018
Verified Purchase
I work in solar doing sales. I knew there was a history of building around the sun and solar water heating but I had no clue how much we as a society advanced solar so many times just to see that progress get mothballed. It really reminds us that we need to constantly keep pushing for innovation and no matter how cheap oil and gas become, the solar industry is not going to go away.
Read more
One person found this helpful
Helpful
Report abuse

Ryan Perry
4.0 out of 5 stars Well Rounded History
Reviewed in the United States on November 15, 2018
Verified Purchase
I bought this book several years ago and, working in the solar industry, often think about some of the historic facts the author brings up. This is far more broad than just the history of photovoltaics. It was an interesting read.
Read more
2 people found this helpful
Helpful
Report abuse

Susan Kay Bilo
5.0 out of 5 stars Let It Shine Inspires
Reviewed in the United States on March 6, 2014
Verified Purchase
In Let It Shine, John Perlin tells the fascinating story of how we came to learn about and understand the power of the sun. Solar knowledge and technologies have come a long way, and Let It Shine will inspire you to reconsider the role the sun can play in your life. I have always been in awe of how simple and elegant it is to take full advantage of the sun through thoughtful design. Thus, I especially appreciate the chapters describing when and how humans learned about the sun’s skypath and the importance of building orientation. Few architects and builders design with the sun in mind, and this is why most of our utility money goes toward heating and cooling the spaces in which we live, work and play. Designing with the sun can eliminate (in some climates) or significantly reduce these energy loads. And, such design often lends itself to a building more conducive to utilizing a sun-powered technology for heating water and producing electricity. This progression provides a more efficient and cost-effective path for achieving net zero energy and regenerative design. Let It Shine reminds us that what is old is new (and improved) again, but also how using the sun is even more important today as we strive to live more responsibly on Earth.
Read more
One person found this helpful
Helpful
Report abuse

Robert Stayton
5.0 out of 5 stars Highly recommended
Reviewed in the United States on July 26, 2015
Verified Purchase
John Perlin's book "Let it Shine" is a marvelous book for understanding the role that solar energy has played throughout human history. I read his earlier version "A Golden Thread" in the 1980s and was inspired then, but this new book is much more comprehensive and covers a longer timeline. John's book shows that using solar energy is not new, so we should feel confident that shifting from fossil fuels to solar energy is both possible and desirable. This book is highly recommended to anyone with an interest in solar energy.
Read more
2 people found this helpful
Helpful
Report abuse

Mrjmjefferson
5.0 out of 5 stars The best history of solar energy
Reviewed in the United Kingdom on August 18, 2019
Verified Purchase
John Perlin had earlier co-authored an excellent book, "A Golden Thread" with Ken Butti, which "Let It Shine" replaces and expands upon in some 500 pages. It ends with a focus on modern solar PV, the field which Perlin had earlier focussed upon in: "From Space to Earth: The Story of Electricity" (1999). These two books, together with Perlin's "A Forest Journey: The Story of Wood and Civilization" (updated edition 2005), are quite remarkable contributions in their fields for anyone wishing to know the history of solar or wood exploitation.
Read more
Report abuse

Amazon Customer
5.0 out of 5 stars Comprehensive, well written, authorative. Unique. All solar enthusiasts should start here
Reviewed in the United Kingdom on September 25, 2018
Verified Purchase
Well researched, lots of good solid information. Everyone should start their solar journey here. read it all or dip in and out you won’t go wrong
Read more
Report abuse

Read more
One person found this helpful
Report abuse
Translate review to English
See all reviews
Back to top
Get to Know Us
Make Money with Us
Amazon Payment Products
Let Us Help You
EnglishChoose a language for shopping. United StatesChoose a country/region for shopping.
© 1996-2021, Amazon.com, Inc. or its affiliates