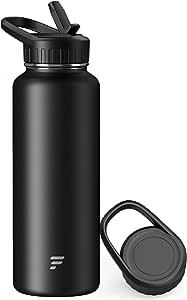 4.8 out of 5 stars
4.8 out of 5
327 global ratings
How are ratings calculated?
To calculate the overall star rating and percentage breakdown by star, we don’t use a simple average. Instead, our system considers things like how recent a review is and if the reviewer bought the item on Amazon. It also analyzes reviews to verify trustworthiness.

Sean Leacy
5.0 out of 5 stars Durable insulated water bottle with a generous accessory bundle
Reviewed in the United States on January 10, 2021
Size: 32ozColor: Deep BlueVerified Purchase
Very sturdy water bottle that maintains internal temps very well, no matter what the exterior temps look like. I have been very pleased with the construction; sturdy, textured matte finish both inside and out. My only complaint is the angle of the handle for the lid. I feel like a rotating handle would fit it better but it's far from a real breaker.

Though I don't use the straw lid, I find it nice that it came with two straws and a cleaning brush as well. Definity well worth the cost!

Craig S. BurnettTop Contributor: Photography
5.0 out of 5 stars Solid, lightweight, well-insulated, with several nice little touches
Reviewed in the United States on November 29, 2020
Size: 24ozColor: BlackVerified Purchase
This 24-oz. drink bottle is very well-designed, feels solid but not heavy, and looks like it will withstand years of use. It's BPA-free and dishwasher-safe. The bottle comes with several thoughtful features that the manufacturer didn't "have" to include, which tells me they actually care about the customer.

The exterior is almost like an anodized finish, a little "grippy," which is good if you're using it when you're sweaty. I've had other bottles that are sleek and shiny, and it's harder to hold onto them.

It comes with two insulated lids - one with a built-in straw-like drinking tab, and one without. Both have great seals on them to keep the contents in. Both also have wide rings with which you can attach the bottle to a backpack, your belt, or other locations, using a carabiner. Nice touch. It's also nice for a little extra leverage if you twisted the cap on a little too tightly.

It also comes with an extra straw, so you can pull one off for cleaning, and put the other one on. That's a nice touch. And speaking of cleaning, it also comes with a cleaning brush, to keep all the nooks and crannies clean of debris. This is especially good if you're using it for protein drinks, which can leave nasty residue if you don't adequately clean the container.

I like that the straw extends so far toward the bottom of the bottle - great that you can get that last sip and not waste what's left over. And I like that the drinking tab is connected to the straw, so you don't have to tilt the bottle up to drink from it

I loaded it with ice, and seven uninterrupted hours later (I left the bottle untouched on the kitchen counter), most of the ice was still there (bottle was at room temperature). The odd thing is, though the ice appeared to reduce in volume, there was no water from melted ice - it's as though the bottle kept the inside so cold, that melting ice from the top of the bottle re-froze at the bottom. Not sure if that was the case, but it's clear that this thing will keep cold things cold. I just checked, and 36 total hours later, there was some water at the bottom, but the ice volume lost only about 25%. So this thing does a great job of insulating.

I will always use this as a cool drink bottle, so I haven't tested it with hot drinks. But if it does this well with ice, I'm sure it will do a great job with hot drinks like cocoa or coffee.

The bottle also comes with a use and care guide, and a QR code that you can use to register your purchase and extend the warranty by a year.

Some may balk at spending this much for a drink bottle. But when it insulates this well, and is built this solidly, and when the company cares enough to include nice touches like an extra straw and a cleaning brush, it's definitely worth it.

I'm really happy with my purchase. It's nice to know there are companies out there that still care about making quality products for a fair price.
Read more

Hope❤️
TOP 50 REVIEWER
5.0 out of 5 stars A very good water bottle. Have ice for 15-18 straight hours. Easy to clean and a extra lid!
Reviewed in the United States on December 12, 2020
Size: 32ozColor: Blue Pink GradientVerified Purchase
This is a very nice water bottle. It is insulated and has a vacuum seal. The two combined makes a bottle that keeps my cold drink and ice cold for all day. I literally have ice cubes when I am on my way home from work. It cam with a spare lid, and a nice cleaning brush. It is dishwasher safe and easy to fill with ice as well as drinks. I have also used it for hot drinks as well. The heat works well, but only keeps things hit for about 1/2 the time things stay cold. However we having hot coffee at 1pm in the afternoon is pretty amazing. The price was reasonable and the sizes they offer incredible. They are practical for any age, and any use or job. The colors are cool and I personally like the way they gradient into each other. A great gift!
Read more

Evette Rowley
5.0 out of 5 stars One word: AMAZING
Reviewed in the United States on December 21, 2020
Size: 32ozColor: Blue Pink GradientVerified Purchase
The Letsfit insulated bottle is, in one word, amazing. First, it’s beautiful and I adore beauty in everything I own. Second, it’s enough water for a full day of hydration. And finally, this keeps water so cold for an entire day! I filled my bottle up with ice and water at 7:00 AM and at 9:30 PM, the ice had not melted! It is nothing short of amazing! I haven’t tried this with hot liquids yet but I would imagine it would be the same. I couldn’t wait to write this review to share my awesome experience with Letsfit’s water bottle. If you want an insulated bottle that really works like it’s supposed to, this is it.
Read more
5 people found this helpful
Helpful
Report abuse

Jennifer Watson
TOP 100 REVIEWER
5.0 out of 5 stars Keeps it cold! Or hot....
Reviewed in the United States on December 21, 2020
Size: 40ozColor: BlackVerified Purchase
Although insulated bottles don’t matter much in the winter... I can’t wait to use it in the summer. It seems to keep things cold for a long time because of the how long ice stays in it.
It is pretty awesome that you can use this for hot drinks as well. It makes it a lot more versatile with the two different lids. It’s like a thermos and water bottle all in one!
I like that there is a cleaner for this as well
Overall it is an excellent water bottle.
Read more

Daniela
5.0 out of 5 stars Quality!! Cold/hot water for 8-10 hours
Reviewed in the United States on December 14, 2020
Size: 32ozColor: BlackVerified Purchase
The best water bottle!!! After going through many bottles that just keep breaking and leaking I finally gave in and spent the money on a good one. It feels solid, good quality. The matte black finish and the chrome under the cap give the bottle a sharp look. It came with an additional cap and extras like a cleaning brush, straws. The seal under the caps is solidly fabricated into the cap unlike other brands that have a flimsy removable seals that leak. I put 4 ice cubes in my water bottle and it kept the water cool for an entire 8-10 hour work day. Coffee/tea stay hot for hours. Two thumbs up
Read more

Sunshine Mel
TOP 50 REVIEWER
5.0 out of 5 stars Beautiful and easy to use to meet my water intake quota
Reviewed in the United States on January 13, 2021
Size: 40ozColor: Blue Pink GradientVerified Purchase
This has quickly become my new favorite accessory. I'm impressed with how long it can keep my liquids cold in this hot Arizona state. It can be used with the included straw or without and just use the lid. The colors remind me of a mermaid and is very calming and beautiful. Drinking with the straw allows me to quickly obtain my water intake quota. It is a large size so I make sure I drink 2-3 of these per day.
Read more
3 people found this helpful
Helpful
Report abuse

Jay Patel
5.0 out of 5 stars Amazing flask, very durable and does its job. Highly Highly Recommend.
Reviewed in the United States on December 20, 2020
Size: 32ozColor: BlackVerified Purchase
I've had this flask for almost a month now and I must say this flask is simply amazing! This flask goes everywhere with me whether I need cold water or need ice, this flask comes thru for me. Hot water also stays hot for hours.

I fill it up with ice and 6 hours later, there's still ice inside, not a single drop of water comes out. It does the job it's supposed to do. Coldwater stays just as cold hours after and so does hot water. The flask is very durable and ruggedly constructed. It comes with an extra staw and an extra strawless cap. It even has a wire brush to clean the straws. This flask is a great investment, I highly recommend this amazing flask.
Read more