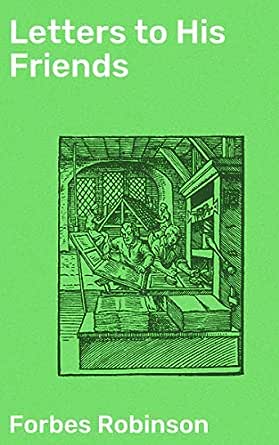 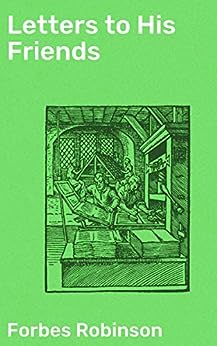 Letters to His Friends Kindle Edition

Barbara Robinson has written several popular books for children, including My Brother Louis Measures Worms, The Best School Year Ever, The Best Halloween Ever, and the enormously popular bestselling novel The Best Christmas Pageant Ever, first published in 1972, which was made into a classic TV movie and on which this book was based. The play The Best Christmas Pageant Ever is produced annually in theaters, schools, and churches all over the world. Ms. Robinson has two daughters and three grandchildren. --This text refers to an out of print or unavailable edition of this title.

After he passed away, it was said of him, "An intimate knowledge of Forbes Robinson must have forced almost any man to the belief that “more things are wrought by prayer than this world dreams of.” He prayed for those he loved, it is certain, for hours at a time…. He believed — he knew (this was his own testimony) — that he could in this way bring to bear upon a man's life more real effective influence than by any word of direct personal teaching or advice. So did he prove once more that the man of power in the spiritual world is the man of prayer."

It was quite obvious to me that Robinson, was theologically quite different from myself and was surrounded by an ecclesiastical world filled with theological creativity and skepticism. As I read, I asked again and again, "Was he a born-again believer? Did he see himself as a sinner who looked to Jesus alone to save him?" To the best of my understanding I would say "yes." Though he often spoke optimistically about the nature of man, he did recognize that he personally was as a sinner in need of the Savior." For instance he writes, "I never try, as some people do, to classify and enter into details about my sins. I bring the whole contradictory, weary, and unintelligible mass of them to God, and leave them with Him. I am quite sure I shall never do better without Him." "I feel more and more grateful and thankful to God for His goodness. He has been so good to me, and I don't deserve it." "Some day, if you care to hear, I will tell you something about my own imperfect life. I can't write it down. Later the day will dawn. But God sends the darkness that we may learn to trust Him, I have never yet found Him to fail. We cannot trust Him too much." It is especially apparent in his times of suffering, in Whom his trust rested.

It was an encouragement to me to see evidence of spiritual growth in his letters as he neared the end of his life. While in chronic pain, he wrote one of his last letters before his death, "I don’t suppose we can understand [the meaning of pain]; but my consolation was that it is not necessarily a sign of God’s displeasure—that the highest life was a life of suffering, that the Son of Man was a ‘ Man of Sorrows.’ Everything seems to me to depend upon the way in which one takes the pain — if one voluntarily says, 'Thy kingdom come. Thy will be done,’ then one is entering into the highest life, and the pain becomes a new method of serving and knowing God."

I thank God that these letters have been preserved, portraying a man who exemplified well a genuine love that devotes serious time to prayer just as Epaphras and the Apostle Paul did. I ask that God would help me to grow to love people like Forbes Robinson did, a love that compels me to earnest and constant intercession.

Read this book on archive.org