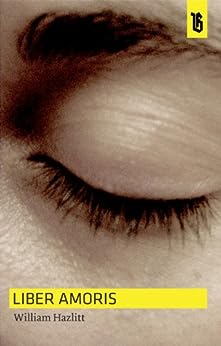 Liber Amoris (with an introduction by Zeeba Sadiq) Kindle Edition

In 1819, William Hazlitt, writer, radical journalist and philosopher, fallen upon harder times, moved into new lodgings, and fell in love with the maid, Sarah Walker.

As his friends deserted him, and the establishment and the right-wing press attacked him, Hazlitt fell madly, hopelessly in love with Sarah, to the point of breakdown. His devotion, although encouraged, was unrequited. In 1823, in a fit of passion and despair, he published their conversations and correspondence in a book that was used to destroy his reputation: Liber Amoris, the book of Love.
Read more
Previous page
Next page

English essayist and critic, William Hazlitt was a distinguished author of humanistic essays and literary criticism. His critical remarks on Shakespeare’s plays and characters made him prominent. --This text refers to an alternate kindle_edition edition.

Christopher (o.d.c.)
4.0 out of 5 stars "Pity me, my friend, for the shame of this recital. Pity me for the pain of having ever had to make it!"
Reviewed in the United States 🇺🇸 on February 15, 2015
Verified Purchase
'... I will not go back there: yet how can I breathe away from her? Her hatred of me must be great, since my love of her could not overcome it! I have finished the book of my conversations with her, which I told you of: if I am not mistaken, you will think it very nice reading. Yours ever.'

'... Since I wrote to you about making a formal proposal, I have had her face constantly before me, looking so like some faultless marble statue, as cold, as fixed and graceful as ever statue did; the expression (nothing was ever like THAT!) seemed to say—"I wish I could love you better than I do, but still I will be yours." No, I'll never believe again that she will not be mine; for I think she was made on purpose for me.'

Etc, etc.- What young spooner has not thought "she ought to love me, because I love her SO much"? It is a pathetic fallacy in more than one sense of the term.

I said, Whatever errors I had committed, arose from my anxiety to have everything explained to her honour: my conduct shewed that I had that at heart, and that I built on the purity of her character as on a rock. My esteem for her amounted to adoration. "She did not want adoration." It was only when any thing happened to imply that I had been mistaken, that I committed any extravagance, because I could not bear to think her short of perfection. "She was far from perfection," she replied, with an air and manner (oh, my God!) as near it as possible.
Read more
2 people found this helpful
Helpful
Report abuse

RDG
2.0 out of 5 stars Well, that was icky
Reviewed in the United States 🇺🇸 on December 18, 2014
Verified Purchase
Quite mortifying to read this, having always admired Hazlitt's writing. It seems hardly possible to believe any more there can be any insight or good judgement in his essays, when he could write this, ostensibly to uncover the treachery of the woman he "loved" (stalked, hounded, slobbered over, terrified). He published their letters, transcribed their conversations verbatim, all to convict her; and on every single page he, Hazlitt himself, is almost unbearable to watch.
Read more
3 people found this helpful
Helpful
Report abuse

Amazon Customer
5.0 out of 5 stars Painful Love Story
Reviewed in the United States 🇺🇸 on August 4, 2003
William Hazlitt (1778-1830) was one of the best writers of essays in the English language, with a powerful, muscular, and modern prose style. He wrote about politics, the arts, literature, his friends (and former friends--he had a talent for alienating many of them) among the Romantics, including Coleridge and Wordsworth. He also wrote, thoughtfully and often charmingly, about himself and his own experiences. _Liber Amoris_, however, is an autobiographical account of a much more harrowing kind. It's the story of Hazlitt's love affair with the daughter of his landlady. Never very good with women (his first marriage was practically arranged by his best friend and fellow essayist, Charles Lamb), Hazlitt proved himself horribly maladroit in the handling of this romance. It was ill-conceived from the start. In 1820 Hazlitt was 43 and Sarah Walker was 19; Hazlitt, though estranged from his wife, was not yet divorced; and, as becomes clear over the course of the story, Sarah was actually much more worldly than Hazlitt himself. The failure of the affair brought Hazlitt to the brink of suicide; writing about it seems to have been his way of pulling himself back towards life by making sense of what had happened to him.
Why read a love story that sounds so grim? Hazlitt's contemporaries wondered the same thing, and were shocked by its publication in 1823, partially because, as Ronald Blythe put it in the introduction to my edition of _Liber Amoris_, "To write it, Hazlitt had to abandon the only thing which could have made it even remotely socially acceptable--dignity." The Victorians also hated the story because of Hazlitt's acknowledgment of a physical relationship between him and Sarah--there's nothing graphic by any stretch of the imagination in the book beyond a few kisses, but this was enough to offend delicate 19th century sensibilities.
But from a twenty-first century vantage point, most of these concerns have fallen away. We live in a confessional age where memoirists put their most tortured secrets on paper for public consumption; the idea of sexuality outside the bonds of marriage no longer has the power to make most of us faint dead away; and Hazlitt's method of composition seems as contemporary and up-to-the-minute as when it was written, a collage of dialogue, letters real and imaginary, and short, almost aphoristic musings on the nature of love and loss. Unobscured by shock and scandal, today _Liber Amoris_ bears incredible emotional force, because it shows without any attempt at prettification or prevarication a man in the throws of a doomed, obsessive, and largely unrequited love. The vast portion of the human race has felt what Hazlitt feels here: pathetic, dejected, undesired, aware of all that, and yet filled with an inexplicable longing, the sense that only one other person's nature fully appreciates his own. The reason to read and to admire _Liber Amoris_ is its unparalleled courage in committing to paper something that, whether it reflects well or ill on the teller of the tale, resonates with every human's experience.
Read more
33 people found this helpful
Helpful
Report abuse
See all reviews

DavidA
4.0 out of 5 stars Interesting
Reviewed in the United Kingdom 🇬🇧 on January 18, 2013
Verified Purchase
If you liked the Sorrows of Young Werther, you'll probably find this interesting too. A similar tale of hopeless tortured love, but told in a more fragmentary style.
Read more
One person found this helpful
Report abuse
See all reviews
Report an issue
Does this item contain inappropriate content?
Report
Do you believe that this item violates a copyright?
Report
Does this item contain quality or formatting issues?
Report