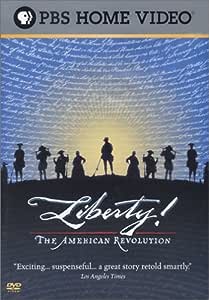 An exuberant documentary about the American Revolution, featuring military re-enactments and dramatic performances by Roger Rees, Philip Seymour Hoffman, Victor Garber, & Donna Murphy. Chapters include the Reluctant Revolutionaries, Blows Must Decide, The Times That Try Men's Souls, Oh, Fatal Ambiton, The World Turned Upside Down, & Are We to Be A Nation?

Looking for an overview of the American Revolution akin to Ken Burns's The Civil War? Look no further! Liberty! The American Revolution successfully takes a unique, detailed peek into the 25 years of events that led to the establishment of the United States of America. The British are not painted as rigid "bad guys," nor the colonists as the rebellious "good guys." Instead, it correlates the complicated struggle between Britain and the American colonies to a stern mother and her teenage child longing for independence. Beginning after the French and Indian War (1763), Liberty! kicks off with the issue of taxation, the colonies' revolt, a declaration of independence, war with the British, eventual victory, and the establishment of a country and constitution unlike any in the history of mankind. The men and women involved are portrayed by actors and actresses reciting original documents, letters, and articles from the times. Well-edited, these soliloquies create an interesting feeling of conversation and continuity, almost as though you are getting a firsthand account of the events as they unravel. Though there are good battle descriptions (particularly Gen. Washington crossing the Delaware, Gen. Burgoyne at Saratoga, and Cornwallis at the Battle of Yorktown), the emphasis of Liberty! is on policy, events leading to war, deteriorating relationships, and ongoing governing challenges rather then actual military strategy. Nonetheless, this documentary is as exciting and interesting as any historical movie you will likely see, and a lot more accurate. --Rob Bracco

4.7 out of 5 stars
4.7 out of 5
267 global ratings
How are ratings calculated?
To calculate the overall star rating and percentage breakdown by star, we don’t use a simple average. Instead, our system considers things like how recent a review is and if the reviewer bought the item on Amazon. It also analyzes reviews to verify trustworthiness.
Top reviews

William J. Landon
5.0 out of 5 stars A Different View of the American Revolution
Reviewed in the United States on December 19, 2016
Verified Purchase
I particularly enjoyed this PBS take on the American Revolution. The work is largely factual (as far as I know). The most interesting thing about this work is that it takes a primarily social view of the revolution. I had never seen this historical event treated in this way and it adds another dimension to our understanding of the time. If you are more interested in a military view of the revolution this work may be found somewhat disappointing. However, if you looking for another perspective of the founding of the United States this is certainly worth a look.
Read more
37 people found this helpful
Helpful
Report abuse

Brenda Bell
5.0 out of 5 stars You need this series!
Reviewed in the United States on May 5, 2017
Verified Purchase
This should be mandatory viewing for all Americans. This is our inception, our birth, our birthright, and now our responsibility. I cannot say enough good things about the detail, historical documentation, and excellence of production found in this series. Do yourself and your family, AND YOUR COUNTRY, a great service by investing in this series and teaching your family what it means to be an American.
Read more
24 people found this helpful
Helpful
Report abuse

Sedalia Ingram
5.0 out of 5 stars Great refresher course to help understand the American Revolution.
Reviewed in the United States on May 3, 2018
Verified Purchase
I give this series 5 stars because I Thoroughly enjoyed the 3 dvds, and have watched it twice. It's so well done, one forgets it's not a movie, but a well produced documentary. My one complaint is that sometimes it's hard to understand the spokesperson portraying a character, or even some of the historians. For example, Abigail Adams speaks so breathlessly that some of last syllables of her words need to be listened to twice to understand what she's saying. Some of the historians are a little difficult to understand, but I am in my 70's, so that could be the problem. The music is too loud in some places which also makes understanding the speaker a little difficult. But, I loved it and will pass it on to family members to enjoy and learn.
Read more
12 people found this helpful
Helpful
Report abuse

Joe Owen
5.0 out of 5 stars Outstanding historical documentary on the causes of the American Revolution
Reviewed in the United States on October 9, 2013
Verified Purchase
This outstanding documentary was made by PBS. Liberty, explores the causes and reasons for the American Revolution. Why the 13 American Colonies who population considered themselves "proper Englishmen" for almost 250 years, went to being rebels in a span of less than 20 years. The documentary explores the varied reasons why the American Revolution occurred and what happened during the Revolution. This is not a documentary that goes indepth about the famous battles, but is a documentary that goes into the people whose lives it effected. Both Tory and Rebel, men and women this documentary explains the feelings about the American Revolution what I would call America's "First Civil War". The controversy of slavery, disloyalty of subjects to their king, rich merchants who didn't want to pay their taxes. All these subjects and many more are presented in fascinating history. Beautiful scenery, great narration, and people who portray famous Colonial Americans. You can't ask for more! This is a series that I recommend in an American History Classroom. This is a series that I recommend to anyone who is interested in Colonial America and The American Revolution. HIGHLY RECOMMENDED!
Read more
27 people found this helpful
Helpful
Report abuse

Mike A.
5.0 out of 5 stars must-see for every American
Reviewed in the United States on February 25, 2017
Verified Purchase
This is a must-see for any American (and every new president). It should be shown in schools too. It really gives you a feel for just how close we came to losing! And of how America was practically spawning "a new race of man" as one British soldier described it toward the end of the series, and which that cover picture is tied to. Some people described it as being of a too-British perspective, But not really. It's just that we were British colonies. The 1st episode you might wonder if you want to keep going with it, but keep going with it! It's inspirational by the time it ends.
Read more
14 people found this helpful
Helpful
Report abuse

dianes
5.0 out of 5 stars One of the best
Reviewed in the United States on July 22, 2015
Verified Purchase
Have seen this many times. Hope to see it many more. (BTW, Philip Seymour Hoffman plays a real character based on diary entries of the time!) The best story explaining how our American revolution came about and how we formed a nation (inc. the proposed constitution being read in town halls and agreed to by the majority!!)
Read more
14 people found this helpful
Helpful
Report abuse

Stephanie Ooten
5.0 out of 5 stars Excellent!!!!
Reviewed in the United States on July 18, 2019
Verified Purchase
Love love love this dvd. Full of facts and information. Entertaining. Makes me want to know more because it is so interesting. With our nation so divided now it makes me more interested in the founding of this country. I wish our politicians would learn more.
Read more
One person found this helpful
Helpful
Report abuse

Edd
4.0 out of 5 stars A "Behind the Scenes" look at the American Revolution
Reviewed in the United States on February 28, 2013
Verified Purchase
I was fortunate, as it were, to be ill one day, and managed to view the entire series virtually non-stop. The most impressive aspect of this production is that it doesn't focus on the individual battles of the war itself, though there are mentions of the more important battles here and there, but it examines and presents the series of events that led to the decision to separate ourselves from the Crown. To understand the mindset that was prevalent in the colonies is not only crucial to understanding who "We, the People" really are, it's equally crucial to understanding our duty to the cause of Freedom and Liberty. This forms, and should be promoted as, a vital foundation to the history of the greatest nation ever to exist in the history of mankind.

The only reason for holding back the "fifth star" is that a great deal of information was, understandably, withheld (I'm sure in the interest of time), which could serve as the starting point for a sequel ... HINT !!!
Read more
3 people found this helpful
Helpful
Report abuse
See all reviews