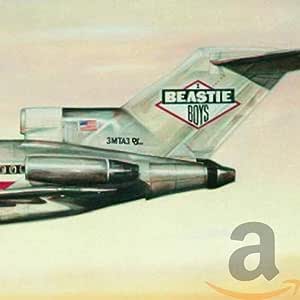 Save with Used - Very Good
$7.92
Ships from: Amazon
Sold by: Jenson Books Inc

Beastie Boys Format: Audio CD
4.8 out of 5 stars 1,410 ratings
Amazon's Choice recommends highly rated and well-priced products.
Amazon's Choice for "beastie boys cd"
See all formats and editions Hide other formats and editions
Includes FREE MP3 version of this album.&nbspProvided by Amazon Digital Services LLC. Terms and Conditions. Does not apply to gift orders.&nbspComplete your purchase to save the MP3 version to your music library.
Available at a lower price from other sellers that may not offer free Prime shipping.

Universal Music Catalogue are re-pressing and re-issuing a series of classic albums from Def Jam, the most groundbreaking and inspired hip hop and urban music label of a generation. Drawing on its hugely impressive catalogue, created in the 21 years since

The joke of Licensed to Ill's cover--that the Beasties could crash their jet into the side of a mountain and keep on tickin'--serves as a good metaphor for a career that even some of their 1986 admirers thought might be over after the one-time-only shock of this full-length debut. That thousands of funk-junkie wannabes have since failed at re-creating its groove, breaking-the-law vibe, and ear-splitting mix of rock and rap is an even better joke. And funniest of all is the record itself, which packs dexterous boasts, aural puns, and lots and lots of yelling into a disc that can still be listened to with as much pleasure as it gave in '86. --Rickey Wright

4.8 out of 5 stars
4.8 out of 5
1,410 global ratings
How are ratings calculated?
To calculate the overall star rating and percentage breakdown by star, we don’t use a simple average. Instead, our system considers things like how recent a review is and if the reviewer bought the item on Amazon. It also analyzes reviews to verify trustworthiness.

agirlandtwocats
5.0 out of 5 stars Beastie Boys changed my life with this cd
Reviewed in the United States on May 20, 2020
Verified Purchase
I absolutely love this cd and it changed my life! it was one of the 2 first cds I bought when I got my first cd player. and this was back when cd players first came out. they were clunky things that you plugged into your existing stereo. they were well over a $100. License to Ill and Black Flag's Everything Went Black were the 2 cds I bought with a gift certificate. there were no gift cards back then. there were paper certificates. I was reading the 'Beastie Boys Book' in quarantine, and I went to play this cd and needless to say, it skipped just about on all the songs. it's been awhile since it's listened to it, so I came on to Amazon to immediately get a copy. when I first put it on to play, I was thrown back to high school, listening to it on cassette (it was later that I would get it on cd format) in my room with my 'boom box' so close to my ear so that my mom couldn't hear it. I would soon listen to all my music that way. they showed and taught me that I just had to open my mind and there was all types of music out there. I will be forever grateful.
Read more

Linda Bee
5.0 out of 5 stars MEATY BEASTIE BOYS!
Reviewed in the United States on January 17, 2015
Verified Purchase
BEASTIE BOYS still rock my world since the day I purchased this album in the eighties and I am 56 now not 26!
One of my classic albums to place in my Bose and BLAST me to my past singing along to all those memorable songs!
So catchy and they always make me grab my hair brush and pretend I am a member of the band!
Yes! I will be rapping along with the Beastie Boys well into my years to come!
And I still get ear worms after I have listened to their sound!
So, JUST KICK IT!
Still no sleep until Brooklyn with these boys!

anshpo
5.0 out of 5 stars Great album!
Reviewed in the United States on March 7, 2020
Verified Purchase
This is such a classic album. My teenaged son is really into vinyl right now and he had to have this. When he received it, there were multiple scratches and it skipped. I asked for a replacement and it was here in two days! Excellent customer service and the replacement is in perfect condition. Will purchase from this seller again.
Read more
One person found this helpful
Helpful
Comment Report abuse

Doinkitfan
5.0 out of 5 stars Solid gold jams!
Reviewed in the United States on July 18, 2020
Verified Purchase
Great pressing/sound quality. For a group that is always a fun listen, this particular album is a riot! I will say at times it is a bit dated but we are talking released in the mid eighties. I also have to say by now Fight For Your Right might be my least favorite song on the record only because I've heard it everywhere for the past 35 years.
Read more
One person found this helpful
Helpful
Comment Report abuse

MJ
5.0 out of 5 stars Gotta fight...
Reviewed in the United States on December 2, 2018
Verified Purchase
C'mon....it's the Beastie Boys....on vinyl!!!! How can you go wrong? Record plays well and it's the heavier vinyl.
Read more
4 people found this helpful
Helpful
Comment Report abuse

Dugan Nash
3.0 out of 5 stars Good, but they've done better
Reviewed in the United States on June 11, 2008
Verified Purchase
This is of course, the Beasties' debut and the album that made them a household name. Rock fans were outraged at the sampling of Led Zeppelin's deceased drummer John Bonham, rap fans were wondering who these snotty white kids were to think THEY could rap, while a whole new generation of kids hypnotized by MTV just didn't care. They wanted to paaaaaaaaaaaaaaaaaarteeeee and the Beastie Boys were all too willing to provide the jamz. Cuts like "Fight For Your Right (to party)", "Brass Monkey" and "No Sleep Till Brooklyn" are still playing at frat parties today I would bet....

To me though, this is their "Born In The USA" album: it's their biggest seller and the one album even non-Beastie fans are likely to have, but it owes its success to the fact that it's also the most watered down and genericized Beastie Boys. While some of the songs truly are interesting and fun to listen to (I particularly like "Girls"), the sound and feel on this cd is ICE cold. It's very sterile and non-groove feeling. If the songs weren't as good as they were, this one could have been a true disaster of a debut because the feel just isn't there.

Which is truly odd because if you listen to subsequent Beastie Boys albums, particularly their 1989 followup, "Paul's Boutique", you find that the Beastie Boys are anything but talentless rappers with no feel. In fact, quite the opposite, they are true slaves to the groove! They would later play their own instruments and do so with enough prowess to release individual cuts and even a full album of instrumentals with grooves so strong that they stand on their own. But groove is completely lacking on "Licensed To Ill", so I have a hard time with much of it. But if you want a great party record, this one could be for you.

To get more of what the Beastie Boys are really capable of though, check out "Paul's Boutique" or even the 2-disc compilation "Sounds of Science" (which contains most of the best songs from "Ill" anyway and is pretty cheap for a used copy here on Amazon....).
Read more
9 people found this helpful
Helpful
Comment Report abuse

zride96
5.0 out of 5 stars Classic Beastie Boys
Reviewed in the United States on June 7, 2020
Verified Purchase
Glad to finally have this on vinyl. Sounds great, the Beasties in their prime. Only better album is Paul's Boutique which is amazing on vinyl too! Get 'em both!!!
Read more
Helpful
Comment Report abuse

Tae
5.0 out of 5 stars Let there be ill
Reviewed in the United States on March 8, 2007
Verified Purchase
I've waited way too long to buy this album. This album is definitely a must-have in my book, not only for pioneering the area of Caucasian rap, but also for the unique style of rap that they brought. As I get older, it makes me sad when I see the generation gap, and "Fight For Your Right" and "No Sleep Till Brooklyn" isn't part of the new generation's collective memory. If I ever have a child, I'm buying the casette tape for this album, sticking it a boombox, putting that boombox on my shoulder, and blasting "Paul Revere" as the child exits the womb. These songs are simply classics, and it's a crime for kids today to not know what they are.
Read more
6 people found this helpful
Helpful
Comment Report abuse
See all reviews

Slighty
5.0 out of 5 stars ...back to the Old Skool
Reviewed in the United Kingdom on January 23, 2019
Verified Purchase
...Sure they matured, sure they did better stuff. But if like me you did your paperround to early Def Jame (Run DMC, LL Cool J and Beasties) then this is a lovely walk down memory lane.

Ooooooooh remember the days when they wore VW signs, when they were banned from the UK for using salty language and being a little bit non establishment.... !!!! Fling on MTV now and see all the misogynistic lyrics and sexulisation of everything .... bit of a rant there...i digress ...anyway...
Read more
6 people found this helpful
Report abuse

Alexis
4.0 out of 5 stars Great debut album with iconic cover
Reviewed in the United Kingdom on July 19, 2019
Verified Purchase
Look beyond Fight for your right and you'll find a fantastic debut album from 3 young New Yorkers who only got better and better as they went on.

JoJoBeany
5.0 out of 5 stars Best Beastie Boys album
Reviewed in the United Kingdom on August 8, 2020
Verified Purchase
Superb, classic Beastie Boys. This was the defining moment for me, with regards to my journey with this band. The best album imho.
Read more
Report abuse

Guitar Kev
4.0 out of 5 stars Superb debut, but I prefer Paul's Boutique
Reviewed in the United Kingdom on February 25, 2019
Verified Purchase
Came out when I was 16- loved it even though I wasn't big into rap. Every song is a belter but it hasn't aged as well as Paul's Boutique which I consider to be their best album, just ahead of Ill Communication :-)
Read more
Report abuse

James
5.0 out of 5 stars Your music collection is missing something: The Beastie Boys.
Reviewed in the United Kingdom on February 27, 2017
Verified Purchase
No album collection, whatever genre may dominate it, is complete without the punk-fused hip-hop of the Beastie Boys. Plays smoothly, arrived wrapped carefully. Highly recommended.
Read more
Report abuse
See all reviews

Page 1 of 1 Start overPage 1 of 1
Previous page
Next page
Pages with related products. See and discover other items: disco music, half japanese