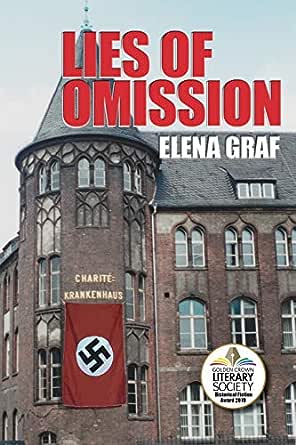 You've subscribed to Passing Rites! We will preorder your items within 24 hours of when they become available. When new books are released, we'll charge your default payment method for the lowest price available during the pre-order period.
Update your device or payment method, cancel individual pre-orders or your subscription at
Your Memberships & Subscriptions
There was an error. We were unable to process your subscription due to an error. Please refresh and try again. 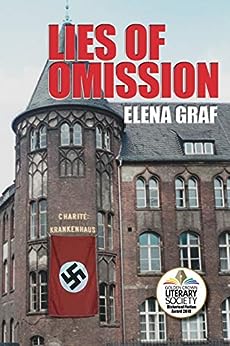 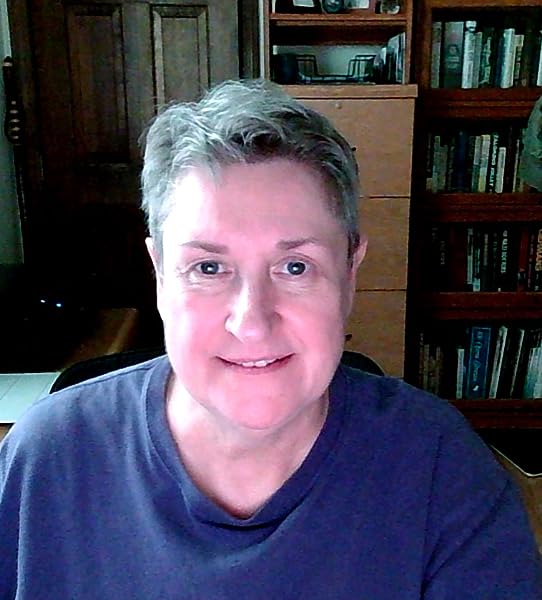 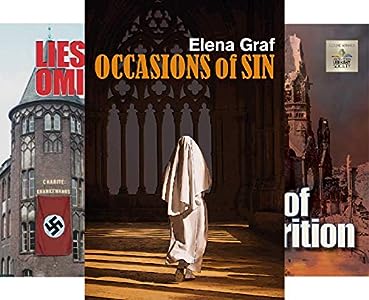 T. T. Thomas
5.0 out of 5 stars Truth as a Powerful Aphrodisiac
Reviewed in the United States on September 18, 2018
Verified Purchase
Lies of Omission by Elena Graf is the stunning sequel to Occasions of Sin, and it delivers an even more deliberate blow to the heart and senses than its predecessor did.

Lies of Omission follows the lives of two main characters, Margarethe, a German noblewoman and doctor, and Katherine, a former nun and doctor, as they trudge together and alone toward the abyss that will become World War II in Germany.

The women are partners, friends, lovers, and uncommon soul mates. However, the terrors of Nazi Germany and the evil mindset that allowed it to graft itself onto a country in moral flux affect every relationship within its borders. Graf is at her most brilliant as she captures the inner dialog and conflicts of her characters as they kneel willingly before secret versions of “the imperative of desire.”

Katherine’s desire for a child and Margarethe’s steadfast objection to it (she has two adult children) causes one to wonder how they will last. Margarethe’s insuppressible desire for a secret assignation with an Italian woman we sense can only bring her grief, brings Katherine to a standstill of shock and ultimatum that finally addresses her own ambivalence about where her acceptance stops and Margarethe’s rapprochement must begin. For heaven’s sake, do not provoke the twin demons of jealousy and justice with a former nun, Margarethe!

Their deeply personal codes of honor are mirror reflections that some of their behavior both contradicts then supports. The two women reflect the great paradox of their times wherein love without sentimentality and devotion without veneration try to co-exist in a world tilting on an axis of isolation (America), self-sufficiency (Britain and its allies) and self-glorification (Germany). It’s a heady mixture of the impassive, the imperturbable and the cold-blooded atop a stew of questionable ingredients.

It can’t work; then it does work. Like warring nations, the two women are masters of the ambush, the concealment and the dramatic revelations that determine their fate.

Each woman has a fundamentally different response to the growing political and military threat in Germany. Where Margarethe’s practicality, sense of superiority and Weimar-sourced libido is able to bracket her various experiences, longings and tendencies into a matrix of common sense, detached sexuality and artistic fervor, Katherine’s outlook and responses are grounded more in fidelity, sentiment and an empathic world view that threatens to overtake common sense.

Graf has again tossed us wildly between the far-flung walls of her imagination and our wobbly sense of what the German citizens moral reality really was. Indeed, Graf’s writing is almost sacred. It reverently reveals its potency slowly, like a time-release conscience drug. Graf’s writing challenges readers to change perspective from easy answers to nuanced layers of truth, and that is a powerful aphrodisiac. We fall in love with people we wouldn’t entirely want to be like.

We see the politically out-of-favor German nobility whose elitism stems from an inviolate respect for tradition, position and education, and we see the insularity of convent life where kindness and trust in God is the ultimate answer to everything.

Graf seems to suggest that those traditional and self-imposed sequestered attitudes, if left unexamined, can result in the same tragedies, the same short-sightedness, the same holocaust. The same capacity for moral expediency. Nevertheless, her characters do confront this conundrum of culture versus compassion, even as they do so from the rarefied literal and emotional cliffs of their privilege.

Interestingly, their positions on so many subjects mirror exactly the national mindset of Germany at this time wherein the nationalistic pride of the Fatherland seamlessly devolved into the purity codes and other travesties. These were offset, to an ineffectual degree, by a general benefit-of-the-doubt approach that said, in essence, the worst of Nazi polemics could never become law of the land because they were irrational, anti-intellectual, anti-scientific, and even unthinkable. If national pride and naïveté had a child…

This is story of great passions, great failings and great successes from women faced with choices, decisions and realities nothing could prepare them for as they try to go about their daily regimen of being doctors in a country that wishes not to stop its illnesses. The interplay between the two women, as well as several secondary characters, was so credible and heart stopping, the novel seemed equal parts romance, mystery and thriller.

Graf is an exceptionally talented writer who trades in such nuance and subtlety of emotion that pages mesmerize the heart and eyes. Do yourself a favor, read Lies of Omission. It is not necessary to read Occasions of Sin first, but you’ll want to read both. Highly Recommended.

GTeller
5.0 out of 5 stars Passing Rites Books 2 and 3
Reviewed in the United States on February 1, 2019
Verified Purchase
I've just finished Books 2 and 3 of this series and it's hard to know where to begin to describe this story. Without hyperbole, it is a sweeping saga of a time in history that is rarely lent to a love story of this magnitude.

It's obvious that the author is a student and lover of history, because there are details in these books that many wouldn't include or find important. This author has done more than mere homework. This story encompasses a couple of decades of German history from the beginning of the Nazi uprising in Germany, up to and through World War II, when all is said and done (Passing Rites Book 4 will, I believe take us to the war and out the other side), and while knowing this, the anticipation is palpable for Book 4 to arrive in a few days.

For me to try and describe the characters would take many paragraphs, and I believe others have done a superb job of doing so ahead of me. They are fully fleshed-out and complete. We see their development and their mindsets change and evolve over the years in which this story takes place.

Once you're involved in this story, it will take you away. A simplistic description, but apt all the same.
Read more
One person found this helpful
Helpful
Comment Report abuse

Ro
5.0 out of 5 stars A story well worth reading.
Reviewed in the United States on January 27, 2019
Verified Purchase
Elana Graf it's a fabulous storyteller. The story background is life in Germany between the two world wars as Hitler is coming into power. The story revolves around three main characters, Margarethe who is a physician and has the air of enormous wealth, her cousin Konrad who does all sorts of work from Margarethe, and Catherine also a physician and the mother of Fiona a child she shares with Konard. Konrad and Katherine while they love each other are not really husband and wife because Katherine belongs to Margarethe.The storyline between Katherine and Margarethe is beautifully told as is the love they both share for Fiona.

I appreciate that the chapters in this book are told from each of the main characters point of view which gives great insight into their thinking. The timeframe of the story is one of constant change and how the main characters deal with the change in their environment while interesting, is also filled with lies of omission.
The skill and artistry that the author put into the story as she wrote it is phenomenal. There's detail about living in the time between the two wars, and, despite all of the changes, the love between the characters in the story remained consistent and strong.
This book is in the middle of the series written by the author however it is also a standalone story that does have connections between the previous and the future book. I highly recommend this book.
Read more
2 people found this helpful
Helpful
Comment Report abuse
See all reviews

Marilyn Langlois
5.0 out of 5 stars So so good!
Reviewed in Canada on March 6, 2019
Verified Purchase
Every book of this series gets better and better. Such a strong and beautiful story. The characters are flawed and real and we fall in love with each and every one of them.
Read more
Report abuse
See all reviews