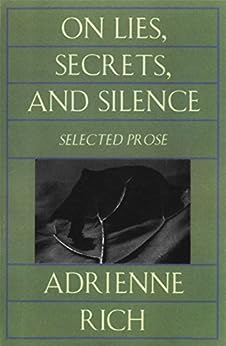 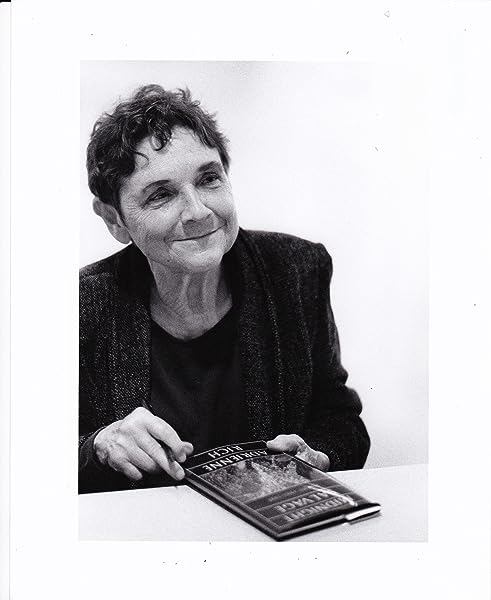 by Adrienne Rich (Author) Format: Kindle Edition
See all formats and editions
Sorry, there was a problem loading this page. Try again.

In this collection of prose writings, one of America's foremost poets and feminist theorists reflects upon themes that have shaped her life and work.

One of America's foremost poets and feminist theorists collect here some of her most important early prose writings. On Lies, Secrets, and Silence is an extraordinary sort of travel diary, documenting Adrienne Rich's journeys to the frontier and into the interior. It traces the development of one individual consciousness, 'playing over such issues as motherhood, racism, history, poetry, the uses of scholarship, the politics of language.' Rich has written a headnote for each essay, briefly discussing the circumstances of its writing. --This text refers to the paperback edition.

Adrienne Rich (1929–2012) was an award-winning poet, influential essayist, radical feminist, and major public intellectual of the twentieth and twenty-first centuries. She wrote two dozen volumes of poetry, including the National Book Award–winning Diving into the Wreck, and more than a half-dozen of prose. --This text refers to the paperback edition.

Adrienne Rich (1929-2012) is an American poet, writer, feminist thinker, and activist in progressive causes. In a career spanning seven decades she wrote and published two dozen volumes of poetry and over a half-dozen of prose. Rich's poetry includes the collections Diving Into the Wreck, The Dream of a Common Language, A Wild Patience Has Taken Me This Far, An Atlas of the Difficult World, The School Among the Ruins, and Telephone Ringing in the Labyrinth. Her prose work includes the collections On Lies, Secrets, & Silence; Blood, Bread, & Poetry; an influential essay, "Compulsory Heterosexuality and Lesbian Existence," and Of Woman Born, a scholarly examination of motherhood as a socio-historic construct. She received the National Book Award for poetry in 1974 for Diving Into the Wreck, and was a finalist an additional three times, in 1956, 1967, and 1991. Other honors include a MacArthur Foundation "genius" grant in 1994, the Academy of American Poets' Wallace Stevens Award, the Medal for Distinguished Contribution to American Letters by the National Book Foundation, the Griffin Trust for Excellence in Poetry's Lifetime Recognition Award, and the Poetry Foundation's Ruth Lilly Poetry Prize. In 1997 she turned down the National Medal for the Arts to protest the growing concentration of power in fewer and fewer hands, writing to the NEA that "anyone familiar with my work from the early Sixties on knows that I believe in art's social presence—as breaker of official silences, as voice for those whose voices are disregarded, and as a human birthright."

Kindle Customer
4.0 out of 5 stars Paperback must be better
Reviewed in the United States 🇺🇸 on November 24, 2018
Verified Purchase
This story reminds me of life in my hometown of Ft. Madison, Iowa. They were both Industrial cities that lost their industries. But the situation in Troy, New York was much worse - half the town ended up in jail.

People will ask me "Why are you so interested in this horrible stuff?" All I can say is "Because that is the dark underground current, that is running our society. You have to look at the lower layers of iceberg, not at what is showing at the top."
I first viewed it on my Fire tablet. But I could not zoom there, which make it useless,

I downloaded it for display on my Kindle for PC app. This gave me a full-screen display, and allowed me to zoom vertically, but the right side of the zoomed display was not visible. All in all, it was a big improvement, and I spent hours looking at it.
Read more
3 people found this helpful
Helpful
Report abuse

Susan G. Lampe
5.0 out of 5 stars Five Stars
Reviewed in the United States 🇺🇸 on June 11, 2018
Verified Purchase
There is no one quite like Adrienne Rich who will be missed. Great book! Definitive essays for women.
Read more
2 people found this helpful
Helpful
Report abuse

Jen S
5.0 out of 5 stars Life changing
Reviewed in the United States 🇺🇸 on January 8, 2016
Verified Purchase
As with all of A Rich's books, I will be reading and rereading this for years. Always a poet, her passion and commitment to women never falters and always manages to shake my view of my life
Read more
3 people found this helpful
Helpful
Report abuse

mmoshofsky1
5.0 out of 5 stars Deep
Reviewed in the United States 🇺🇸 on October 23, 2018
Verified Purchase
I like this poet. It is a thoughtful read
Read more
One person found this helpful
Helpful
Report abuse

Mary E. Jensen
3.0 out of 5 stars Too scholarly
Reviewed in the United States 🇺🇸 on August 6, 2013
Verified Purchase
After I received the book and did a quick review, I realized it had good information, but suddenly i realized it was not as interesting as i thought. it was a little too scholarly for me at this time.
Read more
2 people found this helpful
Helpful
Report abuse

Ana M
5.0 out of 5 stars Profound but uncomplicated essays
Reviewed in the United Kingdom 🇬🇧 on September 14, 2013
Verified Purchase
It is increasingly rare to find a book that deals with emotional as well as civic matters, things like honor,love, ethics. Beautifully written and food for thought.
Read more
3 people found this helpful
Report abuse

Madame X
4.0 out of 5 stars Good read, especially in these times
Reviewed in the United Kingdom 🇬🇧 on March 16, 2018
Verified Purchase
Still as honest as it ever was.
Read more
Report abuse