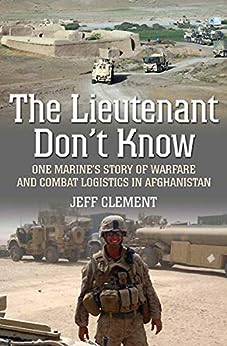 The Lieutenant Don't Know: One Marine's Story of Warfare and Combat Logistics in Afghanistan Kindle Edition

by Jeff Clement (Author) Format: Kindle Edition
See all formats and editions
Sorry, there was a problem loading this page. Try again.
Read more Read less
Previous page
Next page
Due to its large file size, this book may take longer to download

Jeff served as a logistics officer in the United States Marine Corps from 2008 to 2014. After a brief period in industry, he joined the Carlson School of Management at the University of Minnesota as a PhD student in Information and Decision Sciences.

"The book is recommended reading for all who want to understand the fight for Helmand Province in its entirety." - Gen James T. Conway, USMC (Ret), 34th Commandant of the Marine Corps

"Finally, a readable, honest and gritty account of the dangerous, exhausting labor that keeps 'The Green Machine' going. There is no 'rear echelon;' there are only Marines. Without platoons like the one Clement describes, our ground forces could not function." - Bing West, bestselling author of The Village and No True Glory

"[K]ey lessons that can be taken from this excellent book are applicable to a myriad of other professions...Jeff Clement wrote an interesting and honest account of his failure and victories, I hope we can all learn from it." - Huffington Post

"One of the best war memoirs I've ever read . . . a moving, inspiring work, that's enjoyable as hell, as well." - Stan R. Mitchell, author of Hill 406 --This text refers to the hardcover edition.

I didn't do anything crazy or make a selfless sacrifice for a fellow Marine.  They aren't going to make a movie about me.  But that's why this book matters.  This is the story of an average guy in Afghanistan.
--This text refers to the hardcover edition.
Read more

R Nibeyro
5.0 out of 5 stars Logistic from the ground up
Reviewed in the United States on May 29, 2019
Verified Purchase
Jeff Clement wrote an interesting and honest account of his tour of duty in Helmand Province, Afghanistan.
What made me to buy this book, is because this is the only personal account of the logistic unit in operations. Many lessons can be obtained from this book.

In all, the book is a well written account through the eyes of a platoon commander in CLB-6, Alpha Company (transport Coy) during their 2010 deployment in the Helmand Province, in a complex combat environment of today's conflicts.

The book is a recommended reading for all those who wanted to understand the fight for Helmand Province because the logistic side of the conflict or how to supply the troop on the ground. Logistician across world, in almost every army or marines seem to have the same “fame” as second-class soldier or as Jeff wrote POG (Person other than Grunts). More importantly it reveals the key issue about logisticians, "without them (marines) we have no reason to exist, but without us (logisticians), they cannot exist” (I prefer to say sustain).

After a little background when he joins the marines (up to Chapter 6 is little boring), it recounts his time as a platoon commander planning and carrying out supply operations, which was interesting enough by itself.

What really made the book outstanding was his recounting of the many improvised explosive device ("IED") and enemy encounters while carrying out its supply missions.

Reader interested in the logistic side of the nowadays combat environment, will enjoy it.
Read more
Helpful
Report abuse

Tim
5.0 out of 5 stars Great book!
Reviewed in the United States on July 9, 2014
Verified Purchase
I stumbled across the author, and eventually this book, by happy accident when I read his article in the Washington Post, “It’s really hard moving all that stuff around a war zone”. A great article, read it if you get a chance.

I actually had the honor of supporting CLB-6 during OEF 11-2 as a Field Service Representative for a small UAV. While I do not remember meeting the author (my apologies to Jeff if we did meet), I trained many of the Marines he commanded as a platoon commander during 10-1. I also worked very closely with his roommate during OEF 11-2. So this book has a special connection for me.

I was aboard camp Leatherneck from August 2011 through March of 2013 supporting the Marines, soldiers, sailors and airmen of OEF. I have trained nearly 400 warfighters over the years, but CLB-6 will always hold a special place in my heart. Not only were they one of the most professional units I have worked with, they were the only unit I trained stateside and supported in theater. .

There’s no denying they have a crap job; move lots of stuff, in big cumbersome vehicles, across an IED filled landscape to the guys on the pointy end that are often less than appreciative of what they do once they get there…..and then turn around and drive back across the same IED filled landscape back to their home base. Oh, and the rules of engagement are often so restrictive that they sometimes have to wait until they are under full blown attack before they can defend themselves. The Marines (and other warfighters) that willingly do this every day are true heroes. They know it’s not if, but when their truck gets hit by an IED, or an ambush, or kids running on the road to slow the convoy......so that other kids can cut their cargo straps and try to steal their loads, etc, etc,.....but they still get up and do it everyday.

Special connection aside, it was a great read. The author does an amazing job of describing the, people, the mission, the landscape and the sentiments of many of those that have “been there, done that”. I highly recommend this book to anyone that wants to know more about what the warfighters deal with on a daily basis in Afghanistan.
Read more
3 people found this helpful
Helpful
Report abuse

Big Mo
5.0 out of 5 stars Really, really good and candid war memoir from an atypical perspective
Reviewed in the United States on July 7, 2015
Verified Purchase
I was searching for a book on the challenges of recent war logistics and came across this one. I thoroughly enjoyed it and felt like I really got a perspective on what it's like in a desert war environment today. Lt. Clement was a U.S. Marine combat logistics battalion ("CLB") officer stationed in the heart of the action in the Afghanistan war. After a little background, it recounts his time as a CLB platoon commander planning and carrying out supply operations, which was interesting enough by itself. What really made the book outstanding was his recounting of the many improvised explosive device ("IED") and enemy firefight encounters his platoon encountered while carrying out its missions, which in addition to supply missions also included numerous damaged vehicle recoveries. (He describes how the U.S., unlike the Soviets, doesn't leave damaged equipment behind to be salvaged by the enemy). Humble and self-deprecating almost to a fault, but yet tenacious and determined in the performance of his duties, Lt. Clement is a fine example of a modern Marine officer. Readers who enjoy military experience memoirs will like this book a lot.
Read more
One person found this helpful
Helpful
Report abuse

NightRanger
5.0 out of 5 stars The Lieutenant DOES Know
Reviewed in the United States on November 13, 2014
Verified Purchase
I cannot decide if this is a coming of age account of having to grow up when forced to go into combat or simply an account of the willing and eager doing the bidding of their masters who had no real grasp of the reality of the missions assigned to their subordinates. In the end, it does not matter because this is an excellent of Marines doing an excellent job in spite of ambushes, obstacles and surviving in a hostile land where they were hated infidels.

Front line troops may not appreciate the job the unknowing lieutenant and his men do but they will when they run out of ammunition or other critical supplies. Clement's book makes clear that fighting a war without front lines or a readily visible foe is still nasty bloody business whether you are a grunt on the ground or the guy driving the ammo run. Lieutenant Clement knows that and his book clearly explains in crisp readable prose that is only occasionally emotional.
Read more
2 people found this helpful
Helpful
Report abuse
See all reviews