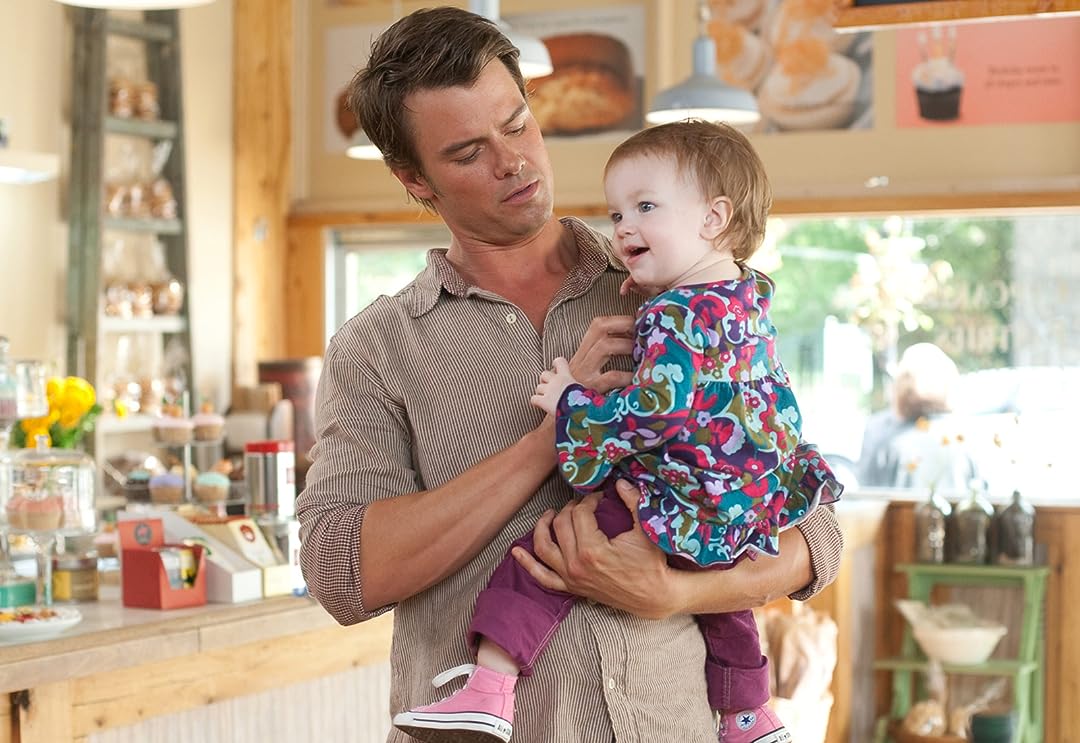 (3,229)6.51 h 54 min2010X-RayPG-13
When a baby girl's godparents become all she has left in the world, they are forced to set aside their differences and find a way to raise her together.

WritergirlReviewed in the United States on May 15, 2018
3.0 out of 5 stars
Not terrible, but kind of meh
Verified purchase
I wanted to like the movie. It was cute enough, but really sleepy and predictable. I just felt like it could have been better. There were no surprises and it was pretty much like watching new parents raise kids. The kid is crying, drive her in the car. The kid is pooping in the tub, quick pick her up and move her to the toilet. The parents are tired and fighting, but also trying their best to raise her and work around each other's schedules. The ridiculous nosy neighbors and he's-a-player, she's-uptight made it even more stereotypical. Humor fell flat. Chemistry fell flat. Just a so-so flick.
One person found this helpful
Report abuse

Butterflymom54Reviewed in the United States on August 14, 2019
5.0 out of 5 stars
Adventure in parenting and falling in love
Verified purchase
Interesting movie. Some irritating people. Very vulgar scenes. Funny scenes and sad scenes. All in all Josh Duhamel did a good job. Cutest baby. One just has to not judge and just enjoy. No one is perfect and this movie is all about that truth. Somehow these two manage to take care of the baby despite the senseless choices they make. Some scenes are over the top. Nice cakes. Very creative bakery items.
3 people found this helpful
Report abuse

P DavidReviewed in the United States on December 8, 2012
5.0 out of 5 stars
Great weekend/date night movie!
Verified purchase
There are loads of well written and detailed reviews, so I won't bother repeating them. This movie is a typical romantic comedy but the acting and the directing/cinematography took it to a new level. It is well paced and the shots and lighting are so well done that this film is quite pretty to watch. But the real reason that you will want to watch this movie more than once is the acting of Katherine Heigl and Josh Duhamel. So many times in romantic comedies the acting falls short and the movie drags on seemingly forever. That is definitely not the case here. Katherine Heigl makes highly improbable situations believable and Josh Duhamel does a yeoman's job keeping up with her. There are laugh-out-loud moments as well as teary-eyed scenes. This movie is a joy to watch and now has a place in my 'keeper' DVD collection of movies I will definitely watch again!
23 people found this helpful
Report abuse

FLNewGirlReviewed in the United States on September 10, 2017
5.0 out of 5 stars
One of my favs!
Verified purchase
I love this movie! I watched it twice. It's a little "blue" in some areas, but Josh and Katherine do a marvelous job of portraying complex characters who go from hating each other to working together and finally falling in love. These are two of my favorite actors who help you get lost in the story!
8 people found this helpful
Report abuse

Shopping DivaReviewed in the United States on August 22, 2021
5.0 out of 5 stars
Funny and touching movie
Verified purchase
I really enjoy watching Life As We Know It. It a classic drama with some great acting. It is a story of friendship, loss, family, friends, and love. I have watched it more than once and absolutely love it. Amazing to see the coming together of two opposite people in unexpected circumstances. Great acting by Josh and Duhamel and Katherine Heigl.
Report abuse

H. BalaReviewed in the United States on February 20, 2011
4.0 out of 5 stars
Oh, that old rhyme... First comes baby, and no marriage, and parents who like to disparage...
Verified purchase
LIFE AS WE KNOW IT manipulates you like a marionette, tugs at your heartstrings, tries to melt your heart with a bombardment of cute baby. It gets away with it because of the two good leads and because the screenplay draws a nice balance between comedy and melodrama, and because the baby really is freakin' adorable. LIFE AS WE KNOW IT has Katherine Heigl once again playing one of those fussy, career-oriented, yet vulnerable roles she so excels in. This time her character is Holly Berensen, an up-and-coming caterer. Josh Duhamel stretches his range from playing G.I. Joe on TRANSFORMERS to a fun-loving, laid back network sports director named Eric Messer (but no one calls him "Eric"). The story kicks off with Holly and Messer set up on a blind date by mutual friends, and the date is a horrible, utter disaster. A colossal dating no-no: arranging for a booty call later that night when your current date is in the same car with you. Holly and Messer quickly part company, quite disenchanted.

So imagine their alarm when those same friends who set them up die in a car accident and Holly and Eric find themselves the legal guardians of a suddenly orphaned baby girl named Sophie. Can these two very different souls put aside their mutual dislike and their warring agendas to make a home for Sophie? Well, no, they really can't. They adore the kid. But they can't stand each other. In the parlance of cinema, there's no better recipe for romance.

For the common denominator crowd, there are the baby poopy gags and the smoking the extracurricular stuff. We get the expected hijinks revolving around our couple's attempts to juggle careers and social obligations with their parenting of Sophie. Except that the screenplay delivers enough depth and serious moments to offset the silly. It restrains itself enough. To be honest, there's nothing here that you haven't seen before. But the performances carry you through. Heigl and Duhamel work really well together. The inevitable love story pays off when it suprisingly takes an honest, emotional turn down the road. And you have to appreciate the neat little touches brought about by a supporting cast which features odd neighbors, a teen (pre-teen?) baby whisperer, and a social worker who develops a case of slow burn hysterics. Josh Lucas also shows up as a hunky pediatrician, not that anyone feels threatened. LIFE AS WE KNOW IT is a romantic comedy as we know it. And, I guess, sometimes, there's comfort in familiarity, if the execution is right, if the two leads are compatible, if the baby is all kinds of huggable. Aw, cripes, I'm a sap.

LouisaReviewed in the United States on February 10, 2011
4.0 out of 5 stars
What can I say? It's Katherine Heigl ;-)
Verified purchase
Take huge chunks out of KH's three most popular comedies: 1) unexpected motherhood (Knocked Up); 2) the tendency to put other's needs before herself (27 Dresses); 3) clashing with a player, then falling in love with him after he miraculously becomes a one-woman man (Ugly Truth), put them in a blender, add the necessary dramatic elements to explain how the main characters ended up in their situation, and what have you got? Well, this movie.

Sorry I can't go deeper than that. I liked it; I'd watch it again. It's Katherine Heigl-- everything she does is entertaining, and she's adorable, and way talented. It's a rom-com; we don't watch them to ponder deep mysteries of existence-- at least I don't. It's an escape for a few.

Having said that, I also want to add that the arguments between the two seemed more real/less staged than I've seen before in other movies; almost felt like I was eavesdropping in a few spots. But I blinked, and he had gone from womanizer to a man in love in about the time it takes to sneeze. And then they all lived happily ever after.

Katherine Heigl has only begun to show us what she can do; I predict there will be much more in the future. Can't wait to see what she does next. Whatever it is, she will rule the screen.

kybrdplyrReviewed in the United States on March 29, 2011
4.0 out of 5 stars
To Really Enjoy this Movie, You Must Find the Main Characters Likeable
Verified purchase
I enjoyed "Life As We Know It" immensely because I thought the protagonists portrayed the confusion and fear of sudden parenthood and sudden very altered relationship, from animosity to cooperation, convincingly. It seemed realistic about a tragic, unlikely, the one you hope never happens to you, situation. So there were poop jokes: that's what babies do and to a non-parent suddenly changing an over-filled diaper, that can be a shock. That Hollie is so uptight while Messer so easy-going is totally believeable, it could have been the other way around, and brings fine tension to the story. One thing that is never doubted and a value I think propels the plotline is that Sophie is loved and treasured. In this respect, the realism of helpful neighbors, swear words on occasion and the need for support or to escape through alcohol or a few loaded brownies is within the realm of the film's overall tone and story. I would recommend this film.
2 people found this helpful
Report abuse
See all reviews
Back to top
Get to Know Us
Make Money with Us
Amazon Payment Products
Let Us Help You
EnglishChoose a language for shopping. United StatesChoose a country/region for shopping.
© 1996-2021, Amazon.com, Inc. or its affiliates