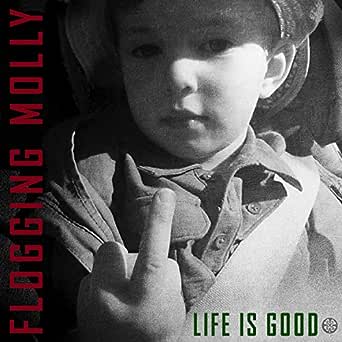 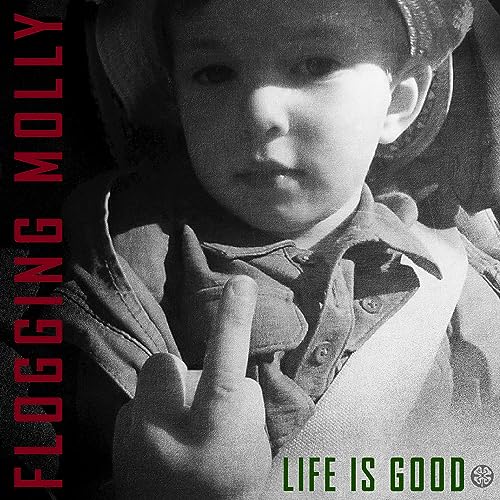 4.7 out of 5 stars
4.7 out of 5
113 customer ratings
How does Amazon calculate star ratings?
Amazon calculates a product’s star ratings based on a machine learned model instead of a raw data average. The model takes into account factors including the age of a rating, whether the ratings are from verified purchasers, and factors that establish reviewer trustworthiness.

C. T. Lipscomb
4.0 out of 5 stars Put the nostalgia away, enjoy what you have now
Reviewed in the United States on June 2, 2017
Verified Purchase
It pains me to not give this album 5 stars.

Nostalgia is not just a longing for a time that was, a yearning for the past... It's the desire for something that can never be again. Flogging Molly was the soundtrack to my life for more than a decade. Drunken Lullabies, Float, Whiskey on a Sunday, all crucial albums to my life's experience. I saw them in concert. My wife and I danced to them at our St. Patrick's Day wedding. Their songs were with me through my best and my worst... and then came Speed of Darkness. The album sounded weird. Maybe it was overproduced, maybe it was just the wrong album for me. But with the disappointment that came with that album came a cooling off period for me with this band. I didn't listen to them for over a year. I saw them in concert again in 2015, and it was great, but the affair was short lived. I had fallen out of love with Flogging Molly, and I was sick over it.

I purposely avoided listening to singles or samples from this new album, in hopes that the anticipation would rekindle that old flame. Having now finished my first listen of the new album, I'm glad I waited. This album is great. It has most of what you would want from a FM album. Dave's voice is as great as ever, and the band sounds tight and polished. They've lost some of that punk sound that my younger self craved, but they've traded it in for a maturity that I wasn't quite ready for in Speed of Darkness. Not every track is a winner, and at times I find myself wanting more out of a song- more energy, more edge, just a hint more distortion, more of the sound that made Drunken Lullabies the anthem that it was. But that's not where I am any more, nor is it where FM has come to in their 20+ years. We're different people now, and those times, for good or ill aren't coming back- time to make peace with the present.

I'll play this album to death. And I look forward to many more years of Flogging Molly.

Troy Truchon
5.0 out of 5 stars A way better direction for the Band after Speed of Darkness, but its not a return to form.
Reviewed in the United States on June 16, 2017
Verified Purchase
If you, like alot of the bands fans, were left a bit confused by Speed of Darkness, and just want your good old Flogging Molly back, I'm sorry to say that Life is Good is decidedly not that, but I'm glad to say I don't think most people will be bothered by that. Life is good is a fairly solid album that takes a step back from their failed attempt to out-pogue the Pogues and fuses their celtic rock/punk roots with bits of blues and soul. It took a listen or two before I felt I "got it", and its certainly not going to replace the classics, but I really think this is an interesting phase in the groups development.
The tone of the album is complex, pensive, but fundamentally optimistic. Most of the songs lack the upbeat tone of their classic rolicking punk-ified melodies, but that just feeds into the sense of optimism through adversity you find in the lyrics throughout the album. From Life is Good, a song inspired by a deathbed conversation between King and his mother in which she said that despite the ups and downs her life was pretty good, into Reptiles, a political call to dusting ourselves off and fixing the worlds problems. You still get a bit of the classic flogging molly vibe with songs like Crushed and The Hand of John L Sullivan, the latter of which is pretty catchy.
Now for the bad. If you didn't like the slower more experimental, or at least experimental for Flogging Molly, songs from Speed of Darkness, several of the songs on Life is Good are going to bring back bad memories. I'll say there there is nothing at all like The Cradle of Humankind on this one, but there are a few songs with shades of that sound here and there. The Days we've yet to Meet is actually really nice, but its just nice, and its really little more than a bit of shmaltzy romance that you'll probably listen to once, then skip past on subsequent listening. Also right smack dab in the middle of the album they have The Last Serenade, which as the name suggests, sounds an awful lot like a closing tune, the album already has a decent closing song in the form of Until We Meet Again so even though its actually a really good song The Last Serenade feels pretty awkward when playing the album as a whole.
Read more
5 people found this helpful
Helpful
Comment Report abuse

Timothy Walker
5.0 out of 5 stars Now Playing on Repeat...
Reviewed in the United States on June 14, 2017
Verified Purchase
After reading another review here, I decided to break down and buy this album. Thanks again, man... this is Flogging Molly.

It's been fifteen years since Lullabies and Swagger so words like "mellow" and "mature" are inevitable, but it's not so bad - think hints of Springsteen and Billy Joel, not the sports stadium sound of a certain other Irish band. More importantly, though, think of those albums and not Speed of Darkness because the classic FM sounds, themes, and phrases have (for the most part) returned. There's probably a song or two on the album you'll regularly skip over (unless you're a fisherman), but as for the rest, well, life is good. Four-and-a-half stars.
Read more
One person found this helpful
Helpful
Comment Report abuse

DRice
5.0 out of 5 stars Old sounds and themes are here!
Reviewed in the United States on August 1, 2017
Verified Purchase
This album gets better every time I listen to it (and it was really good on the first listen.) Not to take anything away from Speed of Darkness (it was good in its own way) , but this is a lot more like the older work like Drunken Lullabies, Swagger, and Within a Mile of Home. The style and theme is more of the classic FM. If Darkness made you start to think maybe they had sold out, or were on the downhill slide, please give this a listen and do it at least 3 times. You will not be sorry.
Read more
2 people found this helpful
Helpful
Comment Report abuse

Amazon Customer
5.0 out of 5 stars This CD is the BEST!!!!
Reviewed in the United States on November 13, 2018
Verified Purchase
This is our first Flogging Molly CD. We just saw them in concert with DKM a few months ago. They were so good on stage and played some of these songs. I saw some reviews that were not very good, and I am very
surprised. We have listened to it over and over again!!!! As a matter of fact, I am listening to it again now, probably for the fourth time today. I love all of the Irish melodies. Anyway...a must buy in my opinion.
Read more
Helpful
Comment Report abuse
See all reviews from the United States

mark
5.0 out of 5 stars Great
Reviewed in the United Kingdom on November 10, 2019
Verified Purchase
item as described and arrived on time so really good!👍
Read more
Helpful
Sending feedback...
Thank you for your feedback.
Sorry, we failed to record your vote. Please try again
Report abuse

Phil Hobo
4.0 out of 5 stars Four Stars
Reviewed in the United Kingdom on July 17, 2017
Verified Purchase
Some good tracks on this.
They sound better every time i play it.
Well done the Floggies
Read more
Helpful
Sending feedback...
Thank you for your feedback.
Sorry, we failed to record your vote. Please try again
Report abuse

Dom
5.0 out of 5 stars life is good
Reviewed in the United Kingdom on January 2, 2019
Verified Purchase
their best album
Read more
Helpful
Sending feedback...
Thank you for your feedback.
Sorry, we failed to record your vote. Please try again
Report abuse

W
2.0 out of 5 stars Plastic film
Reviewed in the United Kingdom on November 26, 2019
Verified Purchase
I was pleased that it came in cardboard and not plastic packaging but dissapointed that there is a plastic film around the cd case! Not needed
Read more
Helpful
Sending feedback...
Thank you for your feedback.
Sorry, we failed to record your vote. Please try again
Report abuse

Soulja 14
3.0 out of 5 stars Three Stars
Reviewed in the United Kingdom on July 17, 2017
Verified Purchase
Not the best albums. A Few fillers on there
Read more
Helpful
Sending feedback...
Thank you for your feedback.
Sorry, we failed to record your vote. Please try again
Report abuse

Clive Cooper
5.0 out of 5 stars Five Stars
Reviewed in the United Kingdom on August 24, 2017
Verified Purchase
takes a few plays but I really like it
Read more
Helpful
Sending feedback...
Thank you for your feedback.
Sorry, we failed to record your vote. Please try again
Report abuse

darrylmccorriston
5.0 out of 5 stars Must have album.
Reviewed in the United Kingdom on December 6, 2018
Verified Purchase
Great band
Read more
Helpful
Sending feedback...
Thank you for your feedback.
Sorry, we failed to record your vote. Please try again
Report abuse