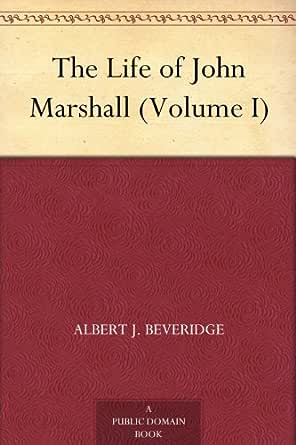 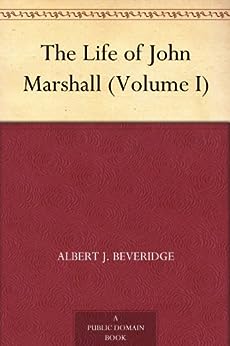 The Life of John Marshall (Volume I) Kindle Edition

These volumes will make fascinating reading for the lawyer, the historian, and legal scholar. They trace the background and career of one of the giants of the law, covering his days as a frontiersman, soldier, legislator, lawyer, politician, diplomat, statesman, and his rise to become the Chief Justice of the Supreme Court. The influence of Washington and Jefferson upon his development is explored, as well as other leading characters of his time, the condition of the people, and the trend of popular thought. Some of his major judicial decisions are examined in depth.

Albert Jeremiah Beveridge was born on October 6, 1862 in Highland County, Ohio. He was a well-known orator, U.S. senator and historian. He was admitted to the Indiana bar in 1887 and began the practice of law in Indianapolis. In 1899 he was elected as a Republican to the U.S. Senate, where (1900-12) he supported the progressive legislation sponsored by President Theodore Roosevelt. Breaking with the conservative wing of his party, he served as chairman and keynote speaker of the emotion-packed convention that organized the Progressive Party and nominated Roosevelt for president in 1912.

After 1912, Beveridge pretty much retired from public office and devoted much time to the writing of history. His The Life of John Marshall, 4 vol. (1916-19), was widely acclaimed and won a Pulitzer Prize.

Kindle Customer
4.0 out of 5 stars Insightful
Reviewed in the United States on May 15, 2020
Verified Purchase
A good book to read for historians and genealogists. Well documented and cited with primary and secondary resources. As a genealogist, I thought it was amazing that probate records were also consulted in documenting the book.
Read more
Helpful
Comment Report abuse

Idolater
5.0 out of 5 stars Great biography of John Marshall and history of revolutionary America
Reviewed in the United States on December 3, 2013
Verified Purchase
This was a fantastic read. I've enjoyed this book more than any other biography I read this year. It was very informative about John Marshall's early years. Even better, the sections about the Revolution and Virginia's constitutional convention were riveting. I've never read detail like this before. I'm looking forward to the next three volumes immensely.
Read more
Helpful
Comment Report abuse

Larry Marshall
4.0 out of 5 stars Related by geneology to John Marshall
Reviewed in the United States on September 19, 2013
Verified Purchase
It is interesting to read about events before the civil war and see how your relatives responded. Then later in life, know the impact that
war had on their ability to serve us in legislature. A lot could be learned today if we had people in office who had served in the military prior to holding a public office.