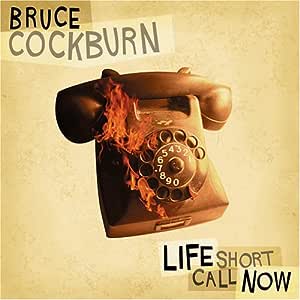 Life Short Call Nowfinds Cockburn's insightful observations on life, love, politics, and the environment as sharp as ever, and longtime fans and new fans alike are sure to be won over by this sterling album. The first single, 'Different When It Comes to You,' goes for adds at AAA June 5th. 16 stations already reporting including R&R reporters KPIG and WNRN. 'Life Short Call NOW' also features special guest Ani DiFranco on 'See You Tomorrow.'

Four decades and 29 albums into his career, Bruce Cockburn has stood for many things: flawless musicianship, activist actions, and lyrics that effortlessly flow from touching to caustic many times throughout a single CD. It is fitting, then, that Ani DiFranco makes an appearance on Life Short Call Now, as the two world-class guitar players have strong political roots, both seeking to leave legacies that extend far beyond memorable melodies in the hearts and minds of their fans. Their lushly produced duet, "See You Tomorrow," has a slight zydeco feel, the only surprise is the lack of overt political bite in the track; a subsequent Cockburn song, "Tell the Universe," more than makes up for the subtlety with its anti-Bush commentary. "Mystery" is straight-up classic Cockburn, yet the inclusion of Ron Sexsmith, Hawksley Workman, and Damhnait Doyle is not just beautiful but also clever, as it shows the genealogy linking Cockburn's effect on subsequent Canadian songwriters. Familiar sounds aside, there is a wonderfully new commonality throughout this disc: Cockburn has included a 27-piece string section whose arrangements add not just richness to songs ("Beautiful Creatures" and "This Is Baghdad"), but powerfully dark counter-melodies as well. One of the most compelling pieces falls near the CD's end: "To Fit in My Heart" somehow manages to combine his love of jazz, worldbeat, and folk music into one gorgeous, haunting melody. It is rare indeed to see such an experienced musician continue to evolve, but Cockburn has done exactly that with this new disc. --Denise Sheppard