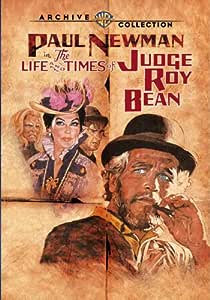 The Life and Times of Judge Roy Bean

4.6 out of 5 stars
4.6 out of 5
213 customer ratings
How does Amazon calculate star ratings?
Amazon calculates a product’s star ratings based on a machine learned model instead of a raw data average. The model takes into account factors including the age of a rating, whether the ratings are from verified purchasers, and factors that establish reviewer trustworthiness.
Top reviews

Gary L. Dibert
5.0 out of 5 stars INTRODUCTION TO VICTORIA PRINCIPAL
Reviewed in the United States on January 13, 2014
Verified Purchase
TITLE: THE LIFE AND TIMES OF JUDGE ROY BEAN opened in theaters in the United States on December 18 1972 starring Paul Newman, Victoria Principal, and Anthony Perkins and it will take you 2 hours to watch this movie. THE LIFE AND TIMES OF JUDGE ROY BEAN was a 1972 western film written by John Milius, directed by John Huston, and starring Paul Newman (at the height of his career, between Butch Cassidy and the Sundance Kid and The Sting). It was loosely based on the real-life, self-appointed frontier judge.

SUMMARY: An outlaw, Roy Bean, rides into a West Texas border town called Vinegaroon by himself. The customers in the saloon beat him, rob him, toss a noose around him, and let Bean's horse drag him off. A young woman named Maria Elena finds and helps him. Bean promptly returns to town and shoots all those who did him wrong. With no law and order, he appoints himself judge and "the law west of the Pecos" and becomes the townspeople's "patrone." Bean renames the saloon The Jersey Lilly and hangs a portrait of a woman he worships but has never met, Lillie Langtry, a noted actress and singer of the 1890s. When a band of thieves come to town (Big Bart Jackson and gang members Nick the Grub, Fermel Parlee and Whorehouse Lucky Jim), rather than oppose them, Bean swears them in as lawmen. The new marshals round up other outlaws, and then claim their money after Bean sentences them to hang. Dispensing his own kind of frontier justice, Bean lets the marshals hang Sam Dodd and share his money. When a drunk shoots up a saloon, Bean doesn't mind, but when Lily's portrait is struck by a bullet, the fellow is shot dead on the spot. Prostitutes are sentenced to remain in town and keep the marshals company.

QUESTIONS: Who was Maria Elena? Who was the mountain man? What kind of gift did he give to Maria? Why did Bean go to San Antonio? What did the Judge bring back to Maria?

MY THOUGHTS: I loved this movie. There was action and drama right from the beginning. I thought the job that Paul Newman did in the role, as Judge Roy Bean was great. This Western had something in it as most Westerns don't and that was comedy. One of the best is when Maria catches the Judge with another woman an she takes after him with a shotgun. I bought this movie however for Victoria Principal and I wasn't disappointed. This was Victoria introduction and she was great. She was very young in this picture but her acting was great. You didn't get to see much of her because it was a Western, however because of her beauty and acting I'm giving this movie 5 weasel stars.

submariner
5.0 out of 5 stars As good as Butch Cassidy & the Sundance Kid!
Reviewed in the United States on October 5, 2014
Verified Purchase
Paul Newman. This guy is on the short list of greatest actors ever! If you liked his Butch Cassidy & The Sundance Kid this movie is a shade behind it. It will allow you to experience a wide range of emotions therefore this is a western that your wife or girlfriend will also love. Just try not to cry at the end in front of her. Go to the restroom near the end while she cries. Backed up by a great cast :Jacqueline Bisset, Tab Hunter, Roddy McDowall, Anthony Perkins, Anthony Zerbe, Ava Gardner, yes THE Ava Gardner, and Stacy Keach is hilarious as gunfighting killer Bob. You remember. BAD BOB. But director John Huston tries to steal an oscar in a cameo appearence. There is a love letter that the judge composes to his secret love western actress Lilly Lantry. Greatest love letter I have ever heard. That alone is worth the price of this DVD.
Read more
7 people found this helpful
Helpful
Comment Report abuse

paul noles
5.0 out of 5 stars He's a bad man, but he's the best man Texas has. He's Judge Roy Bean.
Reviewed in the United States on January 16, 2016
Verified Purchase
My dad loves this movie and I enjoyed watching it with him. This film is a great companion to Dirty Harry. Both films focus on the flawed American Justice system and the suffering brought about from an unjust system. Throughout the movie, the viewer sees the world along side Judge Roy Bean, the hanging judge of Vinagaroon County, and his twisted views on justice and crime. The seriousness of the film is held in check by the copious amounts of comic relief, which allows the viewer to better experience the absurdity of frontier life as well as contemporary life.
Read more
6 people found this helpful
Helpful
Comment Report abuse

Troy Kesner
5.0 out of 5 stars The best Western You've Never Seen!
Reviewed in the United States on March 2, 2020
Verified Purchase
My father talked about liking this movie so we bought it for him for Christmas. Did not know anything about it, but when we watched it, I was pleasantly surprised! All star cast, unique, if not strange, plot, and solid performances all around!
Read more
One person found this helpful
Helpful
Comment Report abuse

James Gomez
4.0 out of 5 stars A Paul Newman golden oldie.
Reviewed in the United States on June 6, 2020
Verified Purchase
The package arrived early so kudos to that. Unfortunately the teeth(?) that hold the actual dvd inside the case had broken so the dvd was rolling around inside the the case and thus suffered some scratching on the playing surface. Thankfully the scratches did not affect the performance and my wife and I enjoyed ol' Paul emoting.
Read more
Helpful
Comment Report abuse

DEPLORABLE MIKE
5.0 out of 5 stars Paul Newman pulls off another winner
Reviewed in the United States on March 13, 2020
Verified Purchase
If your not a fan of the western genre dont waste your time. If you like westerns you cant go wrong with this mix between the light hearted "Butch Cassidy and Sundance Kid" and "Hombre"
Read more
One person found this helpful
Helpful
Comment Report abuse

Beth Moore
5.0 out of 5 stars Story of a legend
Reviewed in the United States on July 12, 2017
Verified Purchase
Interesting movie. Love Paul Newman. Had never seen the movie but knew a little about the legend, just not sure how much of it could be the truth!. Movie not quite what I expected in a way but we enjoyed watching it.
Read more
3 people found this helpful
Helpful
Comment Report abuse

Linda Early Kearney
5.0 out of 5 stars Classic Newman!
Reviewed in the United States on December 12, 2013
Verified Purchase
LOVE Paul Newman, especially in this one. Newman plays real life Judge Bean who according to legend, held court in his saloon along the Rio Grande in a desolate stretch of the Chihuahuan Desert of southwest Texas. After his death, Western films and books cast him as a hanging judge, though he is known to have sentenced only two men to hang, one of whom escaped. Newman is wonderful as the eccentric old man who rules his town with an iron hand until the women of the town take over thru their whiney husbands. Don't miss this one, it's wonderful!
Read more
3 people found this helpful
Helpful
Comment Report abuse
See all reviews from the United States

mr j i cooper
3.0 out of 5 stars not good quality
Reviewed in the United Kingdom on August 9, 2015
Verified Purchase
Item delivered on time, not good quality throughout
Read more
Helpful
Sending feedback...
Thank you for your feedback.
Sorry, we failed to record your vote. Please try again
Report abuse

warmhearted
5.0 out of 5 stars Newman was great
Reviewed in Canada on February 13, 2016
Verified Purchase
This was a gift and I was told it was really enjoyed and watched more than once and will probably be watched again.
Read more
Helpful
Sending feedback...
Thank you for your feedback.
Sorry, we failed to record your vote. Please try again
Report abuse
Load more international reviews

Robert Bachert
5.0 out of 5 stars Five Stars
Reviewed in Canada on June 19, 2017
Verified Purchase
great movie, happy to add to my collection. Good company to deal with.
Read more
Helpful
Sending feedback...
Thank you for your feedback.
Sorry, we failed to record your vote. Please try again
Report abuse

Dan
5.0 out of 5 stars A classic
Reviewed in Canada on August 12, 2015
Verified Purchase
Very entertaining, and just as good as the day it came out.
Read more
Helpful
Sending feedback...
Thank you for your feedback.
Sorry, we failed to record your vote. Please try again
Report abuse

Mrs. J. Stark
2.0 out of 5 stars PRETTY RUBBISHY
Reviewed in the United Kingdom on January 6, 2014
Verified Purchase
As a Paul Newman fan, I wondered why I had never actually seen this movie, I certainly didn't miss much. Everyone has their own taste, but to me, this was a lot of rubbish. The plot was weak, the dialogue corny and I find it hard to think why he got involved in this one,.
Read more
2 people found this helpful
Helpful
Sending feedback...
Thank you for your feedback.
Sorry, we failed to record your vote. Please try again
Report abuse

Page 1 of 1 Start overPage 1 of 1
This shopping feature will continue to load items when the Enter key is pressed. In order to navigate out of this carousel please use your heading shortcut key to navigate to the next or previous heading.
Back
Next
Pages with related products. See and discover other items: roddy mcdowall, Judge Collars