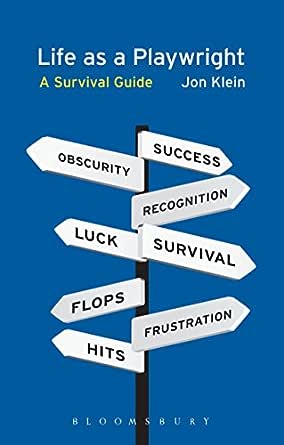 Flip to back Flip to front
Audible Sample Playing... Paused   You are listening to a sample of the Audible narration for this Kindle book.
Learn more
ISBN-13: 978-1474285094
ISBN-10: 1474285090
Why is ISBN important?
ISBN
This bar-code number lets you verify that you're getting exactly the right version or edition of a book. The 13-digit and 10-digit formats both work.

Jon Klein is the head of the MFA Playwriting Program at Catholic University of America in Washington, D.C. and author of over 30 produced plays, performed Off-Broadway and at many prestigious regional theatres. He has also written several adaptations and his stage version of Stendhal's classic novel The Red and the Black was produced at ACT Theatre, Seattle. He adapted T Bone N Weasel for a Turner Network film, starring Gregory Hines and Christopher Lloyd and for which received both the HBO Playwrights USA award and the Midwest Author's award. His other plays include Losing It, Chance and Necessity and Dimly Perceived Threats to the System. He has been a Playwright-in-Residence at the American Repertory Theatre, Cambridge, and the Alliance Theatre, Atlanta and he has taught playwriting and screenwriting at UCLA, the University of Texas, the University of Washington, Ohio University, and Hollins University. --This text refers to the paperback edition.

B. WIgor
5.0 out of 5 stars "Let me repeat the harsh truth. No One Wants To Read Your Play."
Reviewed in the United States on November 26, 2018
Verified Purchase
When I read that line on page 45, I literally burst out laughing. Of course it's true. And it's true in every one of our artistic fields these days. Yes, people are hired and paid to cull through our submitted plays and screenplays; to watch our films; to come to our showcases; and yet, no one seems to really want to. How has this incredible laziness in the development of our entertainment professions come to pass? There was a time when casting directors went out to see everything; when junior agents would read at least 50 pages of each screenplay and a hundred pages of each manuscript that came in. But now -- even when we pay for the right to submit them - they don't.

But I've never before read a how-to book that has admitted that dirty secret! And I loved it. No, of course they don't want to read our plays! So what then? Jon Klein goes about explaining what we should do. And he does it, wonderfully. Klein prepares us admirably for that chance opportunity, if and when it comes.

And he speaks too of another significant problem early on: that no one can teach people how to entertain by telling or showing them how. You can only lead them to the door of the room with some ideas of what to do once they go inside. Then ultimately, they must go in themselves and figure out what they have to offer, and how to use it.

It's a helpful book that's fun to read.

Mr. Bohemian
5.0 out of 5 stars A great start for novices and encouragement for intermediates.
Reviewed in the United States on August 18, 2018
Verified Purchase
I'm not a new playwright, but a struggling playwright. I found this book very encouraging. I didn't need a guide book. Klein's epic failures were an ironic inspiration. My only ick was his brief snowflake reflex with "never" reading reviews. My advice is to ignore that advice. Sample the demos and measure the weather. Don't hide behind artistic privilege.
Read more
Helpful
Report abuse

Maria Gobetti
5.0 out of 5 stars Everything about the business of being a playwright
Reviewed in the United States on June 22, 2018
Verified Purchase
I liked everything about this book. It is so helpful in presenting a really realistic view of what a playwright’s life is like. Jon Klein is a wonderful writer and his plays have been produced all over the country. Although he is an expert he is not in the least condescending.
This is a realistic, encouraging and clear book.
Read more
Helpful
Report abuse

R. Freedman
5.0 out of 5 stars If you're an aspiring playwright or a writer in mid-career, this is the book for you
Reviewed in the United States on July 11, 2018
Verified Purchase
A great, informative read, and an importance resource. The author has had a long, successful career as a working playwright and professor, and he really knows his stuff. This book is invaluable for playwrights just getting started as well as writers in mid-career.
Read more
Helpful
Report abuse

MBS
5.0 out of 5 stars Perfect gift for young playwrights
Reviewed in the United States on June 30, 2018
Verified Purchase
Funny, economical, and true, this is as good an introduction to the playwright's craft and tribe as I've encountered. I wish I had read it twenty years ago.
Read more
Helpful
Report abuse

Bookaholic
5.0 out of 5 stars Not Another How-to-Write Book that Offers No New Ideas.
Reviewed in the United States on February 7, 2019
Klein justifiably subtitles his book “A Survival Guide” for playwrights. “Life as a Playwright” is not another how-to-write book that offers no new ideas. Instead, it offers practical instruction on how a playwright can persuasively present him- or herself as a playwright whose work is worthy of notice, with the result that their play is actually produced. Then, Klein gives detailed advice on how on how the playwright can protect their play against the vagaries of the production process, and, finally, advice on how he or she can manage both success and failure.

What makes Klein’s good and tested advice so palatable is the quality of his writing (unsurprising give his success) and the consistent infusion of wry humor. This is a fun book to read, and I strongly recommend it.

Finally, as a fiction writer, I was surprised that much of Klein’s advice, when creatively re-applied in a different context, can help any author who is trying to sell a book now that the publishing industry emphasizes genre-specific writing aimed at definable audiences, while demanding self-promotion (frequently even over the quality of writing). Any aspiring writer should have this book on their shelf.
Read more
One person found this helpful
Helpful
Report abuse
See all reviews
Back to top
Get to Know Us
Make Money with Us
Amazon Payment Products
Let Us Help You
EnglishChoose a language for shopping. United StatesChoose a country/region for shopping.
© 1996-2021, Amazon.com, Inc. or its affiliates