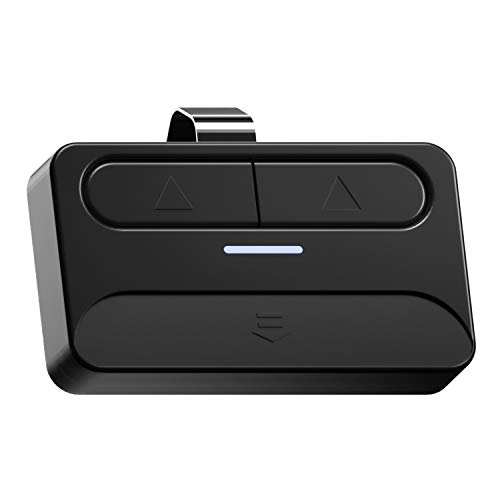 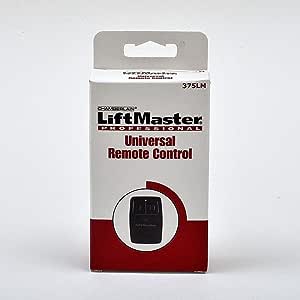 4.3 out of 5 stars
4.3 out of 5
1,036 global ratings
How are ratings calculated?
To calculate the overall star rating and percentage breakdown by star, we don’t use a simple average. Instead, our system considers things like how recent a review is and if the reviewer bought the item on Amazon. It also analyzes reviews to verify trustworthiness.
Top reviews

Pablo509
3.0 out of 5 stars Great for multiple door types, but the range is terrible
Reviewed in the United States on June 14, 2013
Verified Purchase
I installed a new garage door opener and it came with 3 multi-button remotes. Those remotes were paired to the opener itself using a learn feature on the opener. My problem was, we live in a gated community. The gate to our area was an older dip-switch style coded remote. The remotes that came with the opener, were incapable of learing or being encoded with these codes. I really didn't want to carry two remotes in the car, so I set out searching for a remote that I could program to both systems (By the way, HomeLink should be a required feature in all cars sold). I was only able to locate two remotes that allowed the two different style of programming (learning and dip-switch). This remote and the Chamberlain KLIK1U (I suspect these are the same remote with just a different logo, they look exactly the same).

I was able to get this remote programmed with my garge door opener and our gate fairly qwickly. The problem is, as other reviews have stated, the transmitter is way too weak. When using this to open the gate, we have to pull all the way up to the gate (like within a foot or two). We must then remove the transmitter from the visor and roll down the car window and point it at the reciever for the gate. I would estimate the range from the transmitter to the reciever to be under 10 feet.

Finally, this takes the oversized watch style battery (3032 or something like that). I would accept the additional size and weight if it accepted 9 volt or AA/AAA batteries.

If like me, you need a remote for different door/gate types this may be one of your only options. Just be aware that the range on this transmitter is not good.
Read more
3 people found this helpful
Helpful
Report abuse

Tod-Michael
1.0 out of 5 stars Bought 2. Programmed OK, but only had a line of sight range of about 10'. Returning.
Reviewed in the United States on September 8, 2014
Verified Purchase
I had one of these from a few years ago and it worked fine. When that one got lost, I decided to replace it with another. Unfortunately, there's something wrong with these latest ones. While they programmed just fine, they could not operate the garage door receiver from more than 10 feet away, much less from outside the garage, with the door closed. I did contact Liftmaster's customer support and for "troubleshooting" they suggested I turn off every single electronic device in the house (to test for interference, even though their previous one had no issues) and even though the Homelink buttons work from half a block away from both of my cars. There's something seriously wrong here. I suspect quite a bit have a missing link to the RF connector so that the chip is transmitting with no antenna. Liftmaster's troubleshooting was comic and the only resolution they could suggest was to return to Amazon. Kudos to Amazon for a no hassle return even though I had already thrown away packaging.
Read more
3 people found this helpful
Helpful
Report abuse

AmazonJunkie
1.0 out of 5 stars "Universal" Fail
Reviewed in the United States on July 17, 2014
Verified Purchase
Well, in a strange turn of events, my missing remote, which prompted me to buy this universal one, has turned up. To further explain my rating though - I had planned to keep this on hand as an extra, however, it doesn't seem to be so "universal". My garage door system is a Chamberlain LiftMaster Professional and this clicker is allegedly compatible, but after following the instructions to a T, many times over, and also trying some of the tricks other reviewers mentioned, It never would sync up.

My 1-star rating also is based upon the fact that the remote I received isn't the same as the photo in the advertisement, albeit, I could really care less what it looks like as long as it works. Nevertheless, the model number appears to be the same.

What I'm most frustrated with is the instruction manual on this little gem and how the remote I received, is made. #ErgonomicFail!
I'm sorry, but the only risk of "serious injury or death!" I can ascertain, is the the fact that I nearly killed myself trying to open the remote to ensure there was indeed a battery in there.

After slicing my finger open, to find the remote guts were in tact and it did contain the right battery, my frustration nearly got the best of me. I, however, put the hammer and Vodka away long enough to realize if I care enough about getting my $15.00 back, I'd need this box of death in one piece. Seriously though - a 9 month old baby could get the cap off of a child-proof prescription in half the time it took to separate the top and bottom pieces of the remote I was sent, which again, doesn't match the photo given for this product here.

In any event, I am going to return this, right after I make sure my surprise laceration didn't leave any skin cells and blood on the clicker.

Sorry, folks, but it may be better to submit an inquiry directly with the manufacturer of your garage door system before purchasing a "universal" remote.
Read more
Helpful
Report abuse

J. Mcghee
5.0 out of 5 stars Great remote for a great price
Reviewed in the United States on February 26, 2015
Verified Purchase
Our old Click Master broke so I looked online and found this one a bit cheaper, in stock and with free two day shipping.

It was very easy to program. Our garage door opener has a purple learn button. I hit the little button under the batter cover of this device, hit the learn button, clicked the button I wanted to associate with our door three times and the garage door opener clicked letting me know it was correct. Hit the little button inside the battery cover to store the code and it has been working great ever since.

We are able to engage the door from as far away as the neighbors driveway in a typical suburban housing track built in the 70's. This gives us plenty of time for the door to be up far enough to just pull right in.

I would buy this again and I would suggest it to friends.
Read more
2 people found this helpful
Helpful
Report abuse
See all reviews