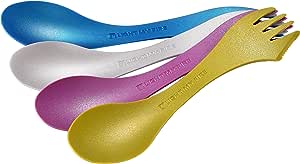 Visit the Light my Fire Store
4.5 out of 5 stars 842 ratings
| 17 answered questions
Currently unavailable.
We don't know when or if this item will be back in stock.

The perfectly designed outdoor eating utensil, the Light My Fire spoon-fork-knife combo brings a bit of civilization to the wild and a bit of the wild to civilization. Triton plastic is BPA-free, won't scratch cookware, won't melt in in boiling water and is dishwasher safe. The sport is perfect for your backpack, boat, picnic basket, lunchbox, purse or briefcase. Designed especially for Light My Fire by Scandinavian designer Joachim Norwell. Package of 4 Sporks.

4.5 out of 5 stars
4.5 out of 5
842 global ratings
How are ratings calculated?
To calculate the overall star rating and percentage breakdown by star, we don’t use a simple average. Instead, our system considers things like how recent a review is and if the reviewer bought the item on Amazon. It also analyzes reviews to verify trustworthiness.

Sugarred
5.0 out of 5 stars Not all sporks are created equal
Reviewed in the United States on June 6, 2014
Verified Purchase
Some are made with Tritan plastic, others are be made with Polycarbonate and Titanium

I have owned sporks made with all three materials....

the listing is confusing because the title said Tritan which is a co-polyester, and BPA free; but then if you click on different colors, you will see some them made out of PC (Polycarbonate) which does contain BPA

Polycarbonate (PC) is far superior to Tritan in terms of strength, durability and scratch resistance, PC flexural modulus is 400,000 PSI vs 225,000 PSI for Tritan, a lot stronger: this is why you see so many reviewers complain about Sporks breaking. Basically Tritan is breakable; the other is not, assuming typical use stress on eating utensils.

So why Tritan??? Because of BPA, many people are concerned about BPA, and Tritan is BPA free. However, it is very unlikely that any BPA will leach out of a well-used, well cleaned Spork, not an issue for me, and I clean them well anyway before first use. PC is also a little more expensive

But if money is not an issue, Titanium is best, it does cost 2-3 times more

I have bought one titanium, one PC and may Tritan sporks over the last several years. My teenage boys love these things, they are scouts and they take them on campouts. They don't break them, they lose them way before they have a chance to break them. So it does not really matter, Tritan is fine and it is cheap. I have had my Titanium for three years and I am happy with it. I took it on two week trek last July, used it for three meals a day by itself (I wasn’t cutting steaks), I was eating mac and cheese, pasta, soups, corn, potatoes, fish, oatmeal ..works great, my son lost his spork twice and I had to buy him new ones from the scout shop during the same period. Many other scouts lost their sporks, but a good number used them and were happy with them.

Hemevubal
4.0 out of 5 stars Very useful, eliminates the need for having two or more utensils
Reviewed in the United States on September 8, 2015
Verified Purchase
Bought the Titanium version of this Spork as part of my Comic-Con kit. The titanium sporks were tough and very useful there. Also decided to buy the plastic ones but only use them at work and other non-rugged locations. I had read many reviews that they broke easily but that has not been my experience after a year of using them. I cook my own lunch for work almost every day and the sporks are used to eat with and have no issues with their durability. They clean up easily and having also bought the case, they don't get exposed to any abuse during storage. I am pretty happy with them. Unlike the traditional spork there is a full spoon I can drink soup with and an almost equally full fork that I can eat noodles/pasta with. As my food is prepared at home there is not a lot of stress outside of eating that these things get exposed to. Perhaps that is the difference between me and those who found the sporks to be flimsy. Perhaps for them the Titanium version would be more to their purpose. I took a star off because I cannot reconcile the placement of the knife on the Fork. I have never been injured with it even when deliberately sliding it against my mouth but I have also never found use for it in using it to eat.
Read more
5 people found this helpful
Helpful
Comment Report abuse

Happy Camper
5.0 out of 5 stars These Are the Best!
Reviewed in the United States on June 26, 2018
Verified Purchase
I absolutely love these and have used several of them for YEARS! In fact, I use the same one at lunch every day at work and have for 5 years. I've never had one break or snap like I've been reading in other reviews. They're not made to cut steak or fix cars or dig dirt to plant stuff. They're made to use gently when no other utensil is available. I carry one in each of my purses and have one with me at all times for that spontaneous need for a utensil to eat deli food in a container or a salad or soup or ice cream. Although I bought my others at REI (camping section), I bought this pack to give as handy gifts.
Read more
2 people found this helpful
Helpful
Comment Report abuse

Ryan
4.0 out of 5 stars Solid utensils
Reviewed in the United States on August 2, 2019
Verified Purchase
These are good, but not great, utensils. They are very lightweight and pack away easily. I don't camp a ton, so they are good for the occasional trip, and I also keep one in my desk at work. The fork prongs are sharp enough and the serrated edge works better than I expected. The spoon part was also bigger than I expected and works well for oatmeal or soup. I do have two complaints though:
1. The serrated edge does irritate the corner of my moth a bit. It doesn't cut it though so its just more annoying than painful.
2. They are quite flimsy. I do not think they will hold up for very long.

If you are heavier camper than me, I would not recommend these, but for the occasional trip and travel utensil, they are perfectly fine.
Read more
Helpful
Comment Report abuse

Edward Grey
2.0 out of 5 stars too flexy, hard to use
Reviewed in the United States on January 8, 2018
Verified Purchase
These have too much flex in them. Also not a fan of how the spoon and fork curve in different directions. Just does not fit well in my hand at all. The serrations hold food. Have not been able to cut much. with food in a bowl you have to push it against the bowl to cut. That said cutting the food first and using the fork is the preferred method as cutting even lasagna is a chore. I just got a  Humangear GoBites Uno, Red  and i find it much better

Wish I could recommend this but its too flexy.
Read more
2 people found this helpful
Helpful
Comment Report abuse

Carter
5.0 out of 5 stars Great quality and love doing my part for the environment
Reviewed in the United States on October 8, 2018
Verified Purchase
I have used this brand of sporks for 10 years - they are the best! Occasionally I will lose 1 prong of the fork but I am more likely to lose the entire thing (left in sink at work most likely). I throw one in my purse, one in my desk at work, keep one in my lunch bag... I'm rarely without one. I love that I am saving the environment 1 plastic fork or spoon at a time. The knife is functional but wouldn't want to cut a sirloin steak with it - it works fine on most things you would cut in a frozen entree though. The hardest part of the purchase is choosing the color set :-)
Read more
One person found this helpful
Helpful
Comment Report abuse

Mgetz
3.0 out of 5 stars good quality, not what i expected.
Reviewed in the United States on May 16, 2018
Verified Purchase
I purchased these for our many camping trips coming up. (Car camping, backpacking, and canoe trips). As anything you buy for camping you should try it before you hit the trail. I am glad that I did. I think the main 2 things that bothered me were the "serrated" knife portion doing work unless you are holding the food you want to cut and that when you eat from the fork side with the "serrated" part touches your outer lip. Its just uncomfortable. They weren't a bad deal and Im glad to know we have a back up but I would not use these on a long hiking trip for days on end.
Read more
One person found this helpful
Helpful
Comment Report abuse
See all reviews

Carly
5.0 out of 5 stars Great value for money and brilliant design
Reviewed in the United Kingdom on September 6, 2014
Verified Purchase
Great value for money and brilliant design. Had one before which eventually snapped in my handbag but it lasted a couple of years. Do your bit for the environment and avoid using disposable cutlery and never get caught short without cutlery on the move.
Read more
One person found this helpful
Report abuse

M. Lawrance
5.0 out of 5 stars Wouldn't be without one on a camping trip
Reviewed in the United Kingdom on June 18, 2016
Verified Purchase
My second set, as first was pounced on by eager family members for their camping trips. Recommend you keep a pair in a daysack, they are so handy at all sorts of times. Colour coding obviously helps multiple users.
Read more
Report abuse

Stacy
5.0 out of 5 stars Great little spork
Reviewed in the United Kingdom on November 4, 2017
Verified Purchase
Perfect!! Had one before, but sadly it got broken in the bottom of a bag. Ordered the set of four instead. They are so handy for the lunch pack up.
Read more
Report abuse