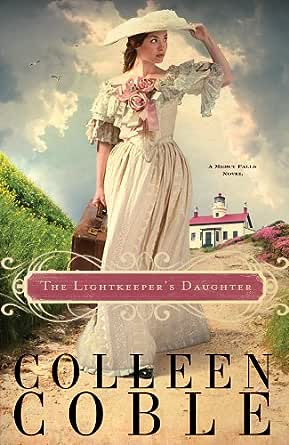 You've subscribed to A Mercy Falls Novel! We will preorder your items within 24 hours of when they become available. When new books are released, we'll charge your default payment method for the lowest price available during the pre-order period.
Update your device or payment method, cancel individual pre-orders or your subscription at
Your Memberships & Subscriptions 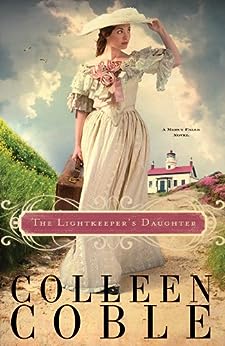 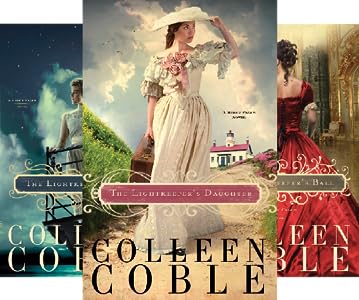 A storm brings an injured stranger and a dark secret to Addie Sullivan’s California lighthouse home. The man insists she is not who she thinks she is, but rather the child long lost and feared dead by the wealthy Eaton family.

Addie secures employment in the Eatons’ palatial home, keeping her identify a secret. As dusty rooms and secret compartments give up their clues about her past, Addie finds faith and a forever love.

Working the phone lines one evening, Katie Russell overhears a chilling exchange between her friend Eliza and a familiar male voice. Katie soon learns that Eliza has disappeared, and the crime may be linked to another investigation headed by the handsome new lighthouse keeper, Will Jesperson. Katie and Will soon form an alliance—an alliance that blossoms into something more.

Olivia Stewart is heiress to an empire. Her family numbers among the Four Hundred—those considered the most distinguished in America. But their wealth has evaporated and now their security rests upon Olivia marrying well.

Using her family’s long-forgotten English title, Olivia travels to Mercy Falls, California, as Lady Devonworth. There she plans to marry Harrison Bennett, a wealthy bachelor. Harrison soon falls for her, but it turns out they’ve both been hiding something.

It's 1907 and Addie Sullivan has found work at a lavish estate in Mercy Falls, California. She hopes to discover the truth of her heritage, but when she arrives at Eaton Hall, nothing is as it seems. Not the idyllic family she dreamt of, not the child she was hired to help, not even the aloof man she's immediately attracted to. And the danger she had hoped to escape has followed her, and she soon finds herself turning to Daniel North -- a man she views with suspicion -- for help.

If Addie is to realize her own dream, she'll deprive the man she loves of his dream -- his right to the wealth and power of the Eaton name. She must come to realize that God is sufficient even in the hard times, and that getting familial approval is not worth her integrity.

4.5 out of 5 stars
4.5 out of 5
365 global ratings
How are ratings calculated?
To calculate the overall star rating and percentage breakdown by star, we don’t use a simple average. Instead, our system considers things like how recent a review is and if the reviewer bought the item on Amazon. It also analyzes reviews to verify trustworthiness.
Top reviews

Joleen
5.0 out of 5 stars What a nice surprise... HONESTY for a change!
Reviewed in the United States on December 26, 2013
Verified Purchase
Finally! A book where someone speaks their mind, doesn't hold back, shares their thoughts and is honest.
VERY often I read books where I just want to throttle the characters. They get themselves into predicaments or suffer consequences because they choose to not share their feelings, or they choose to not tell others something that just happened or what someone just said. Something inevitably happens that could have been avoided with truth.
This book is the opposite and was so refreshing!
The lightkeeper's daughter finds out she's not who she always believed she was. Learning who her true family is, learning to fit in, love or be suspicious of is a treat to read. It's fun to see how this stuffy family is surprised continually by her honesty.
There are so many plot twists especially toward the end that you might get dizzy. It's creative and fun., AND you will be wrong when you think you know what's going to happen, or who the bad guys really are. I LOVE that!

ermajo
5.0 out of 5 stars Delightful departure from my reality.
Reviewed in the United States on March 9, 2017
Verified Purchase
It was a story from the beginning that you didn't want to stop reading to do other things necessary for day to day living. All the turns and twists kept the mystery exciting.
I highly recommend this book. I love anything to do with the ocean and I have always wanted to see the inside of a lighthouse.
The author has a great talent and will write many more intriguing books I'm sure.

Colleen CF
5.0 out of 5 stars Breathtaking!
Reviewed in the United States on June 15, 2017
Verified Purchase
I loved this from the beginning...which got off with speed...no dragging on to get started.
The characters were strongly defined and grabbed at my emotions. As the book progressed, the intensity got stronger and stronger. The last few chapters led me into a race of emotions until the end.
If you love suspense and "clean" romance and a well rounded plot that tied up all the loose ends, then this is for you!
I loved this and look forward to another of Colleen's books.
And PS my name is Colleen!
Colleen Fraser
Read more
2 people found this helpful
Helpful
Comment Report abuse

C M Mays
5.0 out of 5 stars Could not put it down.
Reviewed in the United States on September 5, 2017
Verified Purchase
I always have a book going on my kindle. This one I started and couldn't put down. Addie was a delightful girl, all of the characters were so well developed, I felt I knew each personally. I expected Addie to end up with John but I was not prepared for the outcome of the plot. Very well written with great sub plots and character development.
Read more
3 people found this helpful
Helpful
Comment Report abuse

M Carley
5.0 out of 5 stars Lightkeeper's Bride - Mercy Falls #2
Reviewed in the United States on June 21, 2013
Verified Purchase
Katie is working for the telephone company, but her family wants better for her. They are pushing her to accept the advances of Bart, who is in her social circle, but Katie isn't sure that she can fall in love with him even though her parents want her to. When Katie overhears a conversation over the phone, what she hears gets her involved in a mystery that will turn her world upside down and put her life in danger.

Will is taking care of the lighthouse, but his passion lies with weather forecasting. His brother is in town investigating piracy in the waters near the lighthouse. When his brother asks for help, Will is so accustomed to bailing his brother out that it isn't hard for his brother to talk Will into questioning a woman his brother knew in the past. Finding an abandoned baby isn't quite what he expected, but neither is Katie.

Katie is suspicious of Will at first, but his motives become clear through his actions. I really liked Katie's character and the way she worked through her issues. Her parentage is her main secret, but even she isn't fully aware of the extent of the secret. The parentage of the baby is also in question, and even though both Katie and Will love the child, they aren't sure they will be able to figure out who her real father is. Working to discover who's behind the acts of piracy throws them together and they come to care for each other.

As usual, Coble delivers a solid story full of romance and mystery. It's a great book and a nice addition to the series. The first book is The Lightkeeper's Daughter and the third is called The Lightkeeper's Ball. The characters from the first book are there in a minimal sense and you can read these out of order with no issues. I recommend this book.
Read more
4 people found this helpful
Helpful
Comment Report abuse

Lisa Hess
5.0 out of 5 stars A Truly Inspiring Read
Reviewed in the United States on February 1, 2013
Verified Purchase
The prologue to this novel by Colleen Coble draws you into a story that is shrouded by mystery from the very beginning. A young toddler girl is shipwrecked on an Isthmus with a lighthouse perched on top. Addie, as she is now called, is raised by the lightkeeper and his wife when one day a stranger shows up and says she is actually named Julia Eaton and is the long lost daughter of a wealthy man. Addie goes with the man, who says he's her Uncle Walter, and will become a governess to her father's grandson who has Epilepsy.
Addie is nervous as she starts her new job in the Eaton mansion. She learns to love 5 year old Edward right away and begins to develop feelings toward John, who is Edward's father. Suddenly dangerous attacks on people living in the mansion occur. First her Uncle Walter, then Addie are attacked by an assailant on the same day. Then a kidnapping attempt occurs on Edward. What are the reasons behind the attacks? Does someone evil know about Addie' s true identity as Julia Eaton? Uncle Walter says Addie must trust no one, but Addie finally confides in John who she realizes she has been falling in love with.
There is much mystery, intrigue, and action that keep you in suspense to the resolution of the story. Addie is stretched personally and her faith grows as she realizes God is the only thing that matters in the world. She had craved a real history and heritage, but discovers all might not be as it seems and she needs to make a choice between trusting God or giving into her new family's trust in worldly wealth. This novel was a pleasure to read and I had a hard time putting it down to get some sleep. I will read it again. I have also read many books by Colleen Coble and would highly recommend that any reader out there do the same.
Read more
7 people found this helpful
Helpful
Comment Report abuse
See all reviews