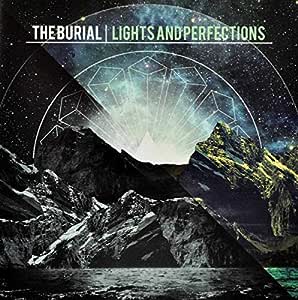 The Burial have developed and grown as a band immensely since starting in 2005. After releases on Strike First Records and Sancrosanct Records, they are now signed to Facedown Records for the release of their new album Lights and Perfections ; a dynamic, progressive metal album that is as powerful as it is convicting both musically and lyrically. The four individuals that make up the Burial are masters of their craft and it shows in every ounce of passion put into Lights and Perfections .

Christian S.
4.0 out of 5 stars Awesome Progressive Metal
Reviewed in the United States on October 26, 2012
Verified Purchase
The Burial is a band on the up-and-up: their last album was released on Strike First records, a subsidiary of Facedown, and for this one they've moved up to their new home, Facedown Records. I expected big things from this album, considering the big label move, and I got them.

The new vocalist fits right into the flow of the band, and though I like the old vocalist better, this review is about what they're doing now, not what they've done in the past. To me he sounds very much like the vocalist from Hope For The Dying, label-mates who sound very similar to this band in more than one respect. The new lead guitarist does a lot more lead than did their last one, and adds a lot to the more progressive turn in their songwriting. The bassist- WOW!! He's definitely not content to follow the bass drums chugging open notes; he does some high-register shredding that is rarely heard outside of jazz and far-out prog (Check out Pearls; The Frailty.. 2:55).

One thing I appreciate about this album is that it is only nine tracks long , and it works out to 40 min, longer than some full lengths. They spared the boring intro or equally boring filler track, and instead used that to add constructive acoustic sections to some of the songs for an awesome prog sound.

Overall, this is a technical and creative metal album. Vocals get a little old for me, but the music is usually enough to keep me from dwelling on it. This album will probably go unnoticed if it doesn't get some help, so check it out!

HeavyMetalSushi
5.0 out of 5 stars Blew My Mind!
Reviewed in the United States on April 11, 2012
Verified Purchase
The Burial is a slightly lesser known up and coming technical death metal band...this is their 2nd album, and I only just recently heard about them, and I'm usually pretty on top of these kinda bands, especially the Solid State and Facedown artists. After hearing a couple of songs by them, I was sold! I scoured the record stores in my area and found not a single copy. One place had received a copy after release and it sold that day. I was a little disappointed, but thank God for trusty Amazon.com...found me a copy on here and the album was worth every penny! Powerful opening, very technical heavy hitting metal...blew my mind! Fricken amazing...my newest favorite band! If you're into metal & technical death metal and whatnot, and/or just big fans of the Facedown label, give these guys a listen! Choice listening material!
Read more
One person found this helpful
Helpful
Comment Report abuse

MrGrumpyPants
5.0 out of 5 stars Really, Really Good!
Reviewed in the United States on March 28, 2012
Verified Purchase
I imagine this will go under the radar. That's too bad because this is a superb metal album. These guys have put down some really great progressive death metal. I use progressive lightly here, but there is enough to warrant it. Every song is full of great music to bang your head to. Great guitar work and the drumming is top notxh. I really like the vocals a lot. I wish these guys success because the quality of these songs should aquire these guys a lot of new fans. I believe this is their thrid album and they just keep improving and making great songs. Nothing stagnant here, this feels fresh and lacks that rehash so many metal bands have today. Anyone into; A hill to die upon or Newer Becoming the archetype should take note, this is some great stuff. Nice job!
Read more
4 people found this helpful
Helpful
Comment Report abuse
See all reviews

FriendORFoe
5.0 out of 5 stars Amazingly good!
Reviewed in Canada on October 17, 2018
Verified Purchase
I purchased in the taking of flesh before buying this one and i was worried in the taking of flesh would be better than this one being that it was a previous release but oh how i was wrong! It is just as a good with a lot of the same elements of in the taking of flesh. Songs like Lights, Perfects, pearls; the frailty of matter (that outro though...), and shackles and ember are among the most amazing tracks. This is some of the best music ive heard period and so please buy this cd to support these guys! I want to hear more of the burial. Its just so sad that ive only just discovered them!!!
Read more
Report abuse