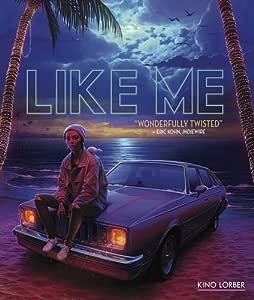 A reckless loner (Addison Timlin, Little Sister) sets out on a crime spree that she broadcasts on social media. After releasing a video of herself robbing a convenience store, she amasses a huge following. While traveling along the coast, she encounters a drifter, an Internet troll, and a paint-huffing outsider who are all pulled into her circle of chaos, junk food, and drugs. Robert Mockler's visually arresting debut feature, produced by indie horror veteran Larry Fessenden, takes the viewer into a world of fabricated personalities and offers a thought-provoking portrait of isolation in our increasingly digital world.

3.0 out of 5 stars
3 out of 5
41 customer ratings
How does Amazon calculate star ratings?
Amazon calculates a product’s star ratings based on a machine learned model instead of a raw data average. The model takes into account factors including the age of a rating, whether the ratings are from verified purchasers, and factors that establish reviewer trustworthiness.
Top reviews

IndyFilms284
5.0 out of 5 stars The NBK of the Follower-Crazed Internet Era.
Reviewed in the United States on March 19, 2018
Verified Purchase
The film starts with one of those “Holy Sh*t” intro scenes where I was like, this movie is either gonna only go down hill from here, or it is gonna be one of my new favorites. And I am happy to say it was the second of the two options. Like Me is as beautiful as it is disturbing. The suspense and intrigue flows throughout the brilliantly paced film. The cinematography was stunning and all the neons brought a chaotic quality to the world the filmmakers brought to life. The film felt frighteningly real with all of the intertwined youtube type clips. Was surprised to see this was first time director: 5 stars for sure, this film will definitely go down as the Clockwork Orange or Natural Born Killers of the Follower-crazed Internet era.

Lisa
5.0 out of 5 stars Style over substance isn't always bad
Reviewed in the United States on August 2, 2018
Verified Purchase
Like Me is a style over substance movie. The story is not told directly. Like Me shows Kiya's loneliness and her insatiable desire to be important and accepted, even at all costs. Viewers are left to infer her motivation to humiliate and kill men. She wants social media attention, but there is an unrest in Kiya that is the real substance of her actions not explained simply by wanting media attention. Maybe she was a victim herself. We're not told. Whatever her motivation, she makes herself a monster in the pursuit of something not stated. Also there a definite feminist angle to Like Me that echoes other fem-sploitation movies, such as Hard Candy. But it's not only about Kiya. Each character is interesting and concrete in their own way because each is prisoner to his own psychology of meaninglessness and suffering and futility of life, which the director captures brilliantly through atmosphere and uncomfortable closeups. So we empathize with her victims. They're not entirely worthless. They're the same as Kiya. They're the same as us. The director is successful to humanize both victim and perpetrator. I give Like Me 5 likes out of 5.
Read more
4 people found this helpful
Helpful
Comment Report abuse

MK
2.0 out of 5 stars This Movie is what happens when you watch too much internet
Reviewed in the United States on June 24, 2019
Verified Purchase
The only reason I'm giving this movie a two is because the open sequence with the shop keeper was the best. Whomever that guy is give him an Oscar. He was INCREDIBLE. Too bad that movie only down hill from there. I will say, I did enjoy the cinematography, but the script and story was TRASH. I don't do drugs... but if I did I imagine this is what it would be like.
Read more
3 people found this helpful
Helpful
Comment Report abuse

Todd M.Top Contributor: Cooking
TOP 500 REVIEWER
2.0 out of 5 stars The two-thirds I watched didn’t have any horror or suspense.
Reviewed in the United States on November 24, 2018
Verified Purchase
The nice thing about streaming over a theater is that once it fails to hold your attention you’re not bound by the price of a ticket to stick with it. This one started out nicely and looked like it had a lot of promise when she was going to broadcast her spree. However, several scenes later a meal with a homeless man meant nothing and more scenes with the motel owner didn’t go anywhere so it was time to leave a movie that suddenly became too boring to continue watching. Once the interest and/or movie momentum is gone so am I rather than waiting to see if it can pull itself back together.
Read more
2 people found this helpful
Helpful
Comment Report abuse

Tristan
4.0 out of 5 stars That was very sad and strange
Reviewed in the United States on January 17, 2019
Verified Purchase
A bit much, and I can't recommend this to all of my friends- maybe just a few of the druggies with an open-mind and a taste for the dark and out-there, but I felt like it was worth a watch. It was so very-nearly stupid, but pretty good also lol
Read more
2 people found this helpful
Helpful
Comment Report abuse

대현의 실라스
1.0 out of 5 stars 90 minutes of the world's biggest waste of time
Reviewed in the United States on September 29, 2018
Verified Purchase
I liked the artistic touch, but the plot is absolutely meaningless. I love noir films and the like, but this one felt so poorly put-together that it does not deserve two stars. Rarely do I see films that I do not love or appreciate. This is one of those films.
Read more
3 people found this helpful
Helpful
Comment Report abuse

Tyler
2.0 out of 5 stars Overly pretentious, waste of time
Reviewed in the United States on January 31, 2019
Verified Purchase
Really was no point to this movie. Movie wastes your time with random psychedelic sequences that have no meaning whatsoever. Wtf was the point of the protagonist's actions???
Read more
2 people found this helpful
Helpful
Comment Report abuse

K.Cullens
1.0 out of 5 stars The Worst
Reviewed in the United States on September 13, 2018
Verified Purchase
Wow, that was horrible. Two idiots get into an online argument over who can be the biggest moron. They both win. The end.
Read more
3 people found this helpful
Helpful
Comment Report abuse
See all reviews from the United States

Rosemary Thyme
2.0 out of 5 stars The main character Kiya is a ...
Reviewed in Canada on November 22, 2018
Verified Purchase
...FemiNazi: A descriptive mentioned in the movie which totally applies to the obsessive and physically/psychologically very brutal lead character. This basically sums up my review of Like Me (as a request as the click "Like" button on Social Media and also a as direct reference to "Me Too") and it tells all. I gave a second star for cinematography and pretty good psychedelic effects & colors. In the same vein, I would recommend instead the similar "Nosedive" episode in the Black Mirror Anthology Series, Season 3, as obsessive and brutal psychologically but masterfully created with dark cynicism and irony.
Read more
Helpful
Sending feedback...
Thank you for your feedback.
Sorry, we failed to record your vote. Please try again
Report abuse