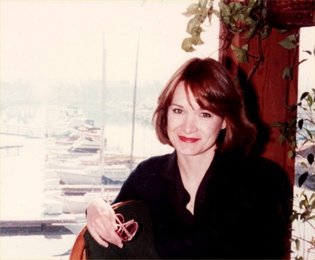 Writer, painter, editor, publisher, screenwriter, poet, creative consultant, comic book, novel and film packager, creator and producer. Creative and business partner of Bruce Jones, mother of three, April Campbell Jones was the artist's model for SOMERSET HOLMES, the best-selling graphic novel and comic book series, as well as its author.
Start reading on your Kindle in under a minute.

3.8 out of 5 stars
3.8 out of 5
138 customer ratings
How does Amazon calculate star ratings?
Amazon calculates a product’s star ratings based on a machine learned model instead of a raw data average. The model takes into account factors including the age of a rating, whether the ratings are from verified purchasers, and factors that establish reviewer trustworthiness.
Top Reviews

Avidear
5.0 out of 5 stars A really fun read. I loved it.
Reviewed in the United States on June 14, 2012
Verified Purchase
Whilst I love murder mysteries, I'm not interested in senseless descriptions of violence. This one manages to draw the reader into a murderous situation via a series of incidences that are described in a way that is in large measure indirect and thus leaves out unnecessary gruesome details. This book is hard to put down because the characters are so enjoyable. The author very cleverly describes just enough of the main ones to feel you know them a little and little enough of the others to make you want more. The hero is inept enough to make him genuinely lovable and believable. A great balance. The style is a bit like Janet Evanovich only set in San Diego. The story contains its share of evil but is dealt with in a way which reassures me that good is in greater supply. An easy reading style that will keep you entertained til the last page. I thoroughly recommend it.
Read more
32 people found this helpful
Helpful
Comment Report abuse

SageB
4.0 out of 5 stars Thinks Like a Woman
Reviewed in the United States on June 26, 2014
Verified Purchase
April’s experience in screen writing shows in her ability to handle realistic conversations. The plot is well-designed and kept me guessing until near the end. The author handles most of the story details rather well. A few things did, however, bother me.

One is quite personal, in that she gives Rick (her main character) a terrible dislike for small dachshunds. Having had several of that breed in my home over a period of twenty-five years, I take offense at her descriptions of their actions and attitudes. Sorry, but that’s my prejudice.

Another problem is a grammatical misuse of the subjunctive mood. At various times she makes a comparison, such as “I wondered if Carmen were as round as Delores.” Ooops! In this instance “were” should be replaced with “was.” Since this is a comparison of actual people, the indicative mood is proper. She could use “were” correctly in the subjunctive mood, if she were making a hypothetical comparison such as “If I were a rich man….” Picky? Sure, but good writers should know the difference.

My major criticism is April’s struggle, as a woman, to get inside the head of her male characters. Her portrayal of Rick makes him appear as a wimp with too few masculine qualities to deserve the love Bree apparently has for him. Likewise, Charlie is not much of a policeman. In fact, none of the men in the story seem well-centered or complete. She should have relied more on her male co-writer for advice, or (even better) she should have written the story from Bree’s perspective.

By overlooking these faults I was able to enjoy the book. I give it four stars.

Dorothy
5.0 out of 5 stars Great story!
Reviewed in the United States on June 14, 2014
Verified Purchase
I really like this story. It is action packed and grabs you from page one to the end. It is well written, flows smoothly and is easy to follow. It is light reading that you may be able to do in an afternoon. The story has suspence and humor.

The characters are well written and easy to relate to. I do like our two main characters Richard and Brie. I think they are a realistic husband and wife who happen to be in similar fields.

Richard is a P.I. in San Diego. He has bitten off more than he can chew when what was supposed to be a simple infidelity case turns into murder. Richards wife is Bree who is a detective novelist who also happens to have a degree in forensics. She usually manages to keep a step or two ahead of her husband.

As the two of them try to solve the case, you will find them soon becoming your favorite couple.

I do recommend this book. Looks like it will be a series, and for that, I am very happy.
Read more
One person found this helpful
Helpful
Comment Report abuse

terry ewing
5.0 out of 5 stars A Mix Up In Murder
Reviewed in the United States on June 24, 2014
Verified Purchase
Bree and Richard are not your typical married couple .She is a successful mystery author and Richard works for his father's detective agency , "Matthews and Matthews ". A routine tailing assignment goes horribly wrong and Richard is up to his neck in a case of death by suicide .If that wasn't enough, add a mysterious skeleton ,visiting in-laws , a very angry sister a pair of missing twins , and to top things off , a threatened law suit that will possibly bankrupt the agency .Will Bree and Richard get to the bottom of things ? Read "LIE LIKE A WOMAN " and find out . A well written mystery novel that I can highly recommend .
Read more
One person found this helpful
Helpful
Comment Report abuse

Grouch
5.0 out of 5 stars A Great Read
Reviewed in the United States on June 20, 2014
Verified Purchase
It is not hard to recommend this book because once I started, I lost sleep until I finished. The relationships between the good guys provide an interesting vehicle for the mystery. The violence and sex is handled with finesse that does not get in way of the flow. I pleasing change from a lot of books.

There is a skeleton found behind a wall (like "The Tell-Tale Heart"), two kidnapped boys, a "live" dead man, and a triangle relationship keeps the story moving forward

There are two "surprises" at the end of the book and you should be able to nail one easily. However, I thought I had it solved several times only to have the downer of having it all wrong,

Kindle Customer
3.0 out of 5 stars Nick and Nora Charles update?
Reviewed in the United States on September 4, 2014
Verified Purchase
Why did I think Nick and Nora Charles and their dog Asta while I read this? It's Rick and Bree and they have a dog, not a cute little one, but a huge untrained one, plus a tiny daughter. Okay, I'm thinking, Nick and Nora were so twentieth century. This is definitely a twenty-first century couple, we have Nick and Nora updated. Rick is the detective, but Bree does a lot of detecting so she can write mysteries. And, she must take daughter along (the dog stays home).

This is definitely a romp, filled with unexpected actions and people, quite convoluted, often off-the-wall, but completely readable (especially if you go with the flow and don't ask too many questions).
Read more
One person found this helpful
Helpful
Comment Report abuse

Nana
4.0 out of 5 stars Lie Like a Woman: A Bree and Richard Matthews Mystery
Reviewed in the United States on July 25, 2015
Verified Purchase
Whats not to like about this story! A husband and wife mystery team that have adventures one after another. This tale starts with a lover wanting to have his partner followed because of a possible infidelity. There are also two missing young teenage twin boys who are possible juvenile delinquents and an ex-husband police officer, who is also friends with his ex-wife. How can you not have a crazy mystery with this cast of characters to choose from? Have fun reading this story.
Read more
One person found this helpful
Helpful
Comment Report abuse

muffiemae
5.0 out of 5 stars A delightful book!
Reviewed in the United States on July 15, 2012
Verified Purchase
Fun and entertaining; interesting characters; witty prose. One of the best books I've read in a while. It kept me laughing and guessing "whodunnit." I didn't have a clue who the murderer was until the end. And it was wonderfully free of grammatical and punctuation errors!
Read more
19 people found this helpful
Helpful
Comment Report abuse
See all reviews from the United States

Liz Bailey
5.0 out of 5 stars Terrific mystery
Reviewed in the United Kingdom on June 28, 2014
Verified Purchase
I just loved the put-upon hero of this mystery, and the way everything seems to go against him. His dry humour got me from the start and I found so much of it hilarious and thoroughly entertaining. It was crazy, bizarre and fascinating. So clever, I rushed to review it on Goodreads and posted my review to Facebook. Read it! You won't regret the investment.
Read more
One person found this helpful
Helpful
Sending feedback...
Thank you for your feedback.
Sorry, we failed to record your vote. Please try again
Report abuse

Book Worm
4.0 out of 5 stars Lie Like A Woman.
Reviewed in the United Kingdom on August 3, 2014
Verified Purchase
I really enjoyed this book, it had me laughing out loud. I really like Richard, Bree and their family and friends and look forward to the next book. My only gripe is there are lots of mistakes in the book, names mixed up, words missing and words that shouldn't be there.
Read more
Helpful
Sending feedback...
Thank you for your feedback.
Sorry, we failed to record your vote. Please try again
Report abuse

JD1
5.0 out of 5 stars Fab read
Reviewed in the United Kingdom on July 29, 2014
Verified Purchase
Really good book. Lots of twists to the plot. I was gripped instantly.
Read more
Helpful
Sending feedback...
Thank you for your feedback.
Sorry, we failed to record your vote. Please try again
Report abuse

Katrina Andrews
1.0 out of 5 stars One Star
Reviewed in the United Kingdom on July 12, 2014
Verified Purchase
not able to read on my ereader
Read more
Helpful
Sending feedback...
Thank you for your feedback.
Sorry, we failed to record your vote. Please try again
Report abuse

See all reviews from the United States
Pages with related products. See and discover other items: evanovich books