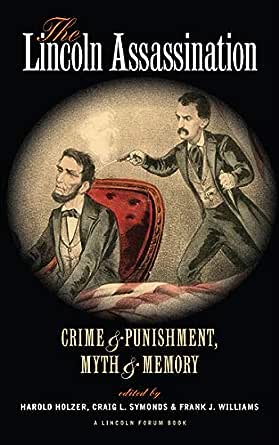 A brilliant addition to the Lincoln assassination bookshelf! This
collection of essays, by some of the foremost authorities in the
field, is a refreshingly new look at an endlessly captivating but
tragic moment that changed America forever. Beginning with a
creatively perceptive look at the history of the public response to
Lincoln’s death, each excellent essay offers new and original research
and interpretation of the plot, capture, trial and execution of the
assassination co-conspirators. While illuminating the historical
truth, these essays also simultaneously expose the myths and trappings
of distorted histories that have long shaped an enduring national
memory of that horrific event. Engaging and written with flair, there
is something here to please and excite everyone!

“Once again, the Lincoln Forum has assembled some of the finest historians and most compelling historical writers, this time to produce a lively collection of essays that manages to challenge many of our assumptions about Lincoln’s assassination and the subsequent military trials of the conspirators. I learned a great deal from this volume and expect that every reader will come away with something new.” (―Matthew Pinsker author of Lincoln's Sanctuary:Abraham Lincoln and the Soldiers' Home)

Can there possibly be anything new to add to the millions of words already written about Abraham Lincoln’s assassination and its aftermath? The answer is a resounding yes, and much of it is contained in this slim but enormously informative and thought-provoking volume. Exploring topics such as the identity of those who kept vigil at the President’s deathbed, the joy that some Americans felt when they learned what Booth had done, and the character of the judge who presided over the conspirators’ trial, this collection of essays offers welcome – and yes, new – insight into a tragedy whose history-shaping impact remains undiminished after 145 years. (―Richard Moe, President National Trust for Historic Preservation)

The nine essays in The Lincoln Assassination--all of them excellent--explore, in the words of the introduction, 'the legal, cultural, political, and even emotional consequences of the assassination.' (―The Federal Lawyer)

These wide-ranging thought provoking essays present a striking analysis of the contemporary impact and the memory of the murder of President Abraham Lincoln, the first American president to be assassinated while in office. These powerful, thoroughly researched presentations, with several impressive illustrations, provide important information about one of our nation’s most critical and memorable times, a time still significant in American social and political life. (―James Oliver Horton author of The Landmarks of African American History and co-editor of Slavery and Public History: The Tough Stuff of American Memory)

Unlike other scholars who couch assassin John Wilkes Booth's motivations in the politics of the time (his romanticization of the South and anguish at its perceived oppression), Holzer locates Booth's disenchantment within the bosom of the idiosyncratic, theatrical Booth clan. (―Georgette Gouveia Westchester County Business Journal) --This text refers to the digital edition.

Harold Holzer is Roger Hertog Fellow at the New-York Historical Society and one of the nation’s leading authorities on Lincoln and the political culture of the Civil War era. He is chairman of the Abraham Lincoln Bicentennial Foundation and has written, co-written, or edited forty-seven books, most recently Lincoln and the Power of the Press. --This text refers to the digital edition.

In the fourth volume from scholarly collective the Lincoln Forum (following Lincoln Revisited), 10 contributors turn their attention to the 16th president's assassination. Editors Holzer and Williams collaborate on an interesting (and well-illustrated) look at popular engravings and prints portraying Lincoln's final hours, some of which put a crowd of 50 at Lincoln's deathbed, in a room large enough for no more than a half-dozen. Richard Sloan looks at Lincoln's funeral procession and his time lying in state in New York City, with interesting insight for amateur urban historians. Thomas Lowry's "Not Everybody Mourned Lincoln's Death" is vivid but narrow, focusing on the easily-grasped point that many Americans, on the heels of the Civil War, were glad to see Lincoln dead. Multiple articles look at the trial of John Wilkes Booth's conspirators, often disagreeing about which of the accused, convicted and hanged were actually guilty. Thomas R. Turner notes that as early as the 1860s, "historians were agonizing that... there was little left to be said" about Lincoln; while this collection does reinforce that idea, it also turns up enough unanswered or undecided questions to hold readers' interest and promise more scholarship to come. B&w illus.
Copyright © Reed Business Information, a division of Reed Elsevier Inc. All rights reserved. --This text refers to the digital edition.
Read more

4.4 out of 5 stars
4.4 out of 5
3 customer ratings
How does Amazon calculate star ratings?
Amazon calculates a product’s star ratings based on a machine learned model instead of a raw data average. The model takes into account factors including the age of a rating, whether the ratings are from verified purchasers, and factors that establish reviewer trustworthiness.
Top Reviews

Christian Schlect
VINE VOICE
4.0 out of 5 stars Dead On
Reviewed in the United States on May 30, 2010
Verified Purchase
The public memorialization of the death of Abraham Lincoln along with the trial of those who were accused of helping Booth carry out his infamous deed are at the core of this anthology.

As with almost any collection of this sort, some authors are better than others in terms of writing style. But all here are noted experts, and from each of these one can learn bits, at least, of interesting new information or different ways of evaluating the well-trod historical record.

For those who would like to learn more about John Surratt (the one who got away), I recommend "The Last Lincoln Conspirator" by Andrew C.A. Jampoler (2008).

Brooklyn Kid
4.0 out of 5 stars A book of scholarship
Reviewed in the United States on July 27, 2020
These are scholarly articles by professional historians, read to other scholars. Very good articles but a bit esoteric for none professionals.
Read more
Helpful
Comment Report abuse
See all reviews from the United States