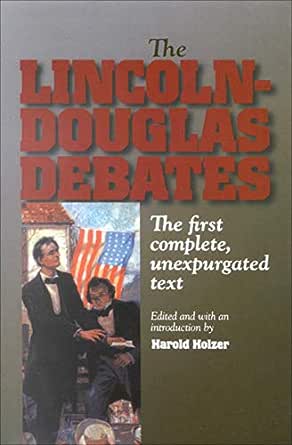 Those who have read the debates between Lincoln and Douglas that took place during the 1858 Senate race in Illinois may not have read what was actually said. The authenticity of the texts has always been in dispute, with the political presses of the day polishing the prose of their candidate and Lincoln himself publishing a sanitized version two years later. The editor of this volume (coeditor, with Mario Cuomo, of Lincoln on Democracy , LJ 10/15/90), claims to present the first authentic texts of the seven confrontations. Interspersed are shouted comments from the crowds, background on the sites, and renditions of how the debates may have appeared. What emerges is a vivid, boisterous picture of politics during our most divisive period: the dull ineloquence of Lincoln and his interplay with hecklers, the blatant bigotry and slashing humor of Douglas, and the small degree to which campaigning has changed in 135 years. This fresh, fascinating examination of a significant step in our march toward the Civil War deserves a place in all American history collections. For public, school, and academic libraries.
- James Moffet, Baldwin P.L., Birmingham, Mich.
Copyright 1993 Reed Business Information, Inc. --This text refers to an alternate kindle_edition edition.

Harold Holzer is Roger Hertog Fellow at the New-York Historical Society and one of the nation’s leading authorities on Lincoln and the political culture of the Civil War era. He is chairman of the Abraham Lincoln Bicentennial Foundation and has written, co-written, or edited forty-seven books, most recently Lincoln and the Power of the Press. --This text refers to an alternate kindle_edition edition.

The first complete and unedited version of the historic debates that mesmerized America and brought the issues of slavery and nationhood to the forefront of the country's agenda. --This text refers to an alternate kindle_edition edition.

“Abraham Lincoln’s life and work produced a cornucopia of provocative ideas, analyses and opinions. John Y. Simon and Harold Holzer have made it easier for us to share in that abundance with a volume of carefully selected works from the Lincoln Forum.”---―Mario Cuomo, former Governor of New York

“These thirteen essays are all products of the annual and acclaimed Lincoln Forum. While the Union president is the central theme, the topics range far afield and offer a tasty hors d’oeuvre for Civil War scholars and students alike.”---―James I. Robertson, Jr., Author of Stonewall Jackson: The Man, the Soldier, the Legend.

A vivid, boisterous picture of politics during our most divisive period . . . This fresh, fascinating examination . . . deserves a place in all American history collections., ― Library Journal --This text refers to an alternate kindle_edition edition.

Husker005
5.0 out of 5 stars Timeless and Important
Reviewed in the United States on September 27, 2015
Verified Purchase
In 1858, Abraham Lincoln attempted to persaude the Illinois' State Assembly to select him to the United States Senate over the incumbent and powerful Steven A. Douglas by engaging Douglas in seven open air debates. The fact that Douglas agreed to these debates is somewhat of a mystery since he was already well-known and well-admired in Illinois. Giving Lincoln a forum in which was on the same stage a Douglas would likely enhance Lincoln's political stature but would not necessarily benefit Douglas. Nonetheless, Douglas agreed to seven debates and each was dramatic. The theme central to all seven was the issue of slavery and whether the Federal government should ban it, limit it or stay out of the issue and let the states themselves decide. Neither pursauded the other but Douglas, a pro-slavery advocate, apparently did enough to get elected by the Illinois State Assembly (US Senators at that time were still elected by their respective State Legislators). Lincoln, however, made the case, repeatedly for Man's inalienable, God given right to be free. Lincoln's message, as history demonstrated, eventually carried the day with his Party and the American electorate. His message rings true today.
Read more
4 people found this helpful
Helpful
Comment Report abuse

Mike Kolls
5.0 out of 5 stars It was about slavery
Reviewed in the United States on June 22, 2016
Verified Purchase
The rhetoric in these seven debates defines a period of US history markedly different than today. As such, ideas in the debates and this review are a bit awkward – keep the context of 1858 in mind…

Where the 1858 Lincoln-Douglas debates a high-point of political rhetoric? How did a series of debates for one Senate seat divide a nation? How/why did the “loser” become President within 2 years?

Their political careers had crossed paths many times. A good volume of these seven debates were state-level minutiae aimed to discredit the other candidate – past political squabbles. Amidst comments of praise, both candidates took many nuanced jabs at each other. 1858 was a time where men respected each other, could also take political jabs at each other, and then be civil to each other. These debates are an informative step into the 19th century.

What did “all men are created equal” (in The Declaration of Independence) mean? Did this apply to black slaves? How does one defend slavery? Was full equality for Africans staunchly advocated? What about Liberia?
Read more
One person found this helpful
Helpful
Comment Report abuse

StBindo30
5.0 out of 5 stars Wonderful resource
Reviewed in the United States on December 9, 2016
Verified Purchase
I enjoyed reading through these debates immensely. So much so that I completed them in one sitting, which is a rare occurrence considering the books length. I've only recently begun to have a rather intense interest in President Lincoln, and believe these debates (even if you only read the edited ones) are fundamental to getting to know the man as a politician and how he reasoned. Even though these are said to be the most "base" versions of the debates, considering they are accounts given by the opposition, i found them intellectually challenging and overall stimulating. Many of the issues they cover are still being debated, even if we've changed the way we argue. I highly suggest these to any history buffs, and especially any who are attempting to study Lincoln himself.
Read more
2 people found this helpful
Helpful
Comment Report abuse

roweazmike
5.0 out of 5 stars SENIOR LEARNED FROM THIS BOOK FOR KIDS
Reviewed in the United States on January 22, 2013
Verified Purchase
This book is written as a companion to the movie for children. The author explains how Lincoln understood the United States as a nation, but he also understood its relationship in the world — providing an example of excellence and goodness among all nations. The author caused me to think a whole lot about how a political leader in the United States might use Lincoln's example. I also purchased the Licoln-Douglas debates.

I recommend this book for young and old.

James Schneider
5.0 out of 5 stars Well researched & unique perspective
Reviewed in the United States on January 27, 2011
Verified Purchase
Purchased this book as I was preparing to portray Senator Douglas in a debate re-enactment. I found it fascinating and very useful. Using the versions of each debate that were likely the least 'doctored' greatly increased the historical accuracy. I also found the background information that was presented with each debate to be well written and entertaining as well as informative. I have other versions of the Lincoln - Douglas debates but this is by far the best. I highly recommend this book.
Read more
7 people found this helpful
Helpful
Comment Report abuse

MAR
5.0 out of 5 stars A real feel for the atmosphere
Reviewed in the United States on October 4, 2013
Verified Purchase
I enjoyed reading this book very much. We get the lead-up to each debate with current events how each candidate arrived. The mood of the crowd as was reported at the time. And the complete texts of the debates as reported by both "partisan" newspapers of the times. Decide for yourself. The differences are minor.
Read more
3 people found this helpful
Helpful
Comment Report abuse