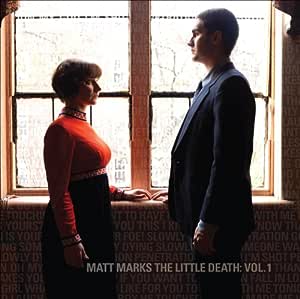 Add to Cart
$5.23
+ Free Shipping
Sold by: discman_ny
Have one to sell?
Sell on Amazon

Matt Marks' The Little Death, Vol. 1 is of thicker stuff, described by the composer as a 'post-Christian nihilist pop opera' but one that has more in common with Air Supply than it does the Ring. The "Penetration Overture" is blatantly lush, the kind of sonic situation in which you'd expect Peter Gabriel to show up any second, but instead the voices (his and that of Mellissa Hughes) hide among the breeze. These little teenage tone poems to there being no God do what any great pop aspires to do; conflate the spiritual with the hormonal, but Marks adds subtle literal touches like samples of 70's gospel records and the herky-jerky panic of new wave obsessive love, occasionally ratcheted up to hyper-speed to capture the leaps between Heaven and the body.

The Little Death does not shy away from the saccharine but isn't above corrupting it as well. "He Touched Me" gets its dreamboat rocked by sudden hip-hop samples, as if to confuse the He's. "I Like Stuff" sounds like an excerpt from the world's worst student musical, an "Everything You Can Do I Can Do Better" riff that should send you running to the exits until it hits you that the litany of likes are all commercials of sorts that culminate in "I like Jesus." The song lays out the crossed purposes of the sacred and the profane to intersect over the will, and the channeling thereof. The Little Death is musical drama for the post-Glee set, using the medium's uplift to tear the fake walls away. It's like rollerskating from straight from Xanadu into the Void. -- Outside Left Magazine, Alex V. Cook