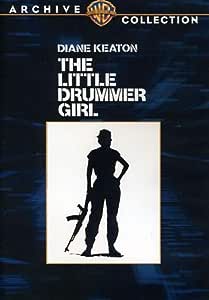 Palestinian intelligence says she's loyal to their cause. Israeli counterintelligence says she's "bright, creative, underused, romantic and a liar." Academy Award? winner* Diane Keaton stars as Charlie, a repertory actress and Palestinian sympathizer who plays the role of - and for - her life when she's thrust onto the center stage of international espionage. Klaus Kinski and Yorgo Voyagis co-star as shrewd Israeli operatives who plot to use Charlie as bait to capture an elusive Palestinian terrorist (Sami Frey). Director George Roy Hill masterfully arranges the pieces of this cloak-and-dagger puzzle based on John le Carré's bestseller into a dazzling thriller racing full tilt through London, Munich, Athens, Jerusalem and Beirut. March to the enthralling beat of The Little Drummer Girl.

3.9 out of 5 stars
3.9 out of 5
208 global ratings
How are ratings calculated?
To calculate the overall star rating and percentage breakdown by star, we don’t use a simple average. Instead, our system considers things like how recent a review is and if the reviewer bought the item on Amazon. It also analyzes reviews to verify trustworthiness.
Top reviews

Kindle Customer
1.0 out of 5 stars An absolutely dismal flop !
Reviewed in the United States on October 13, 2018
Verified Purchase
This film is inspired by the book of the same name by the writer John LaCarre'. The story is a strong examination of the ongoing tribulations of the people in the middle east, an area known for extreme partisan politics and religious extremism. The book and the film try to expose us to both sides of a multi sides problem. The book is a stunning success while the film is a dismal, dismal failure. The cast is a group of fresh faces to western movies and helps to illustrate the leap to mid east society. The second major fault of the film is that by the script. This script gutted the story and leaves huge plot holes for the audience navigate. The major fault of the film is the starring actress. Diane Keaton is absolutely clueless! Her delivery of lines is painful to observe leaving me uncomfortable even watching her. I have no idea what the reasoning for casting her was other than her name and association with Woody Allen. I believe that she alone is the reason this film is a flop because the audience has to emphasize with the role portrayed by the actors and this no talent woman makes this impossible. I realize this is a review of a decades old film but each viewing is or should be a fresh look at the presentation. Read the book and save your money.
Read more
7 people found this helpful
Helpful
Comment Report abuse

JustaGuy
4.0 out of 5 stars It ain't what it appears to be
Reviewed in the United States on April 30, 2019
Verified Purchase
If you know anything at all about books and movies about espionage, intelligence, and related subjects you will know that appearances can be deceiving - hence the terms wilderness of mirrors et all. I have seen this movie 3 times now and I have 3 completely different reactions:

1. When it came out. I thought it was a reasonably good "action" movie with a lousy female lead. Could not understand why they picked Keaton.

2. Later on - saw it again and thought it was rubbish.

3. Saw it 38 years after it came out. Now, I think LeCarre is having us on. He is in the movie after all. I think he is taking the piss out of movie stars who become "activists". Lines like: "don't you want to do something more than do sit-ins in Trafalgar Square" are give-aways. Do more? Heck, she was switching sides. What she wanted was more positive reinforcement and someone to give her the lines. remember she was down to doing crap wine ads. He fame had a leak in it. I think LeCarre very cleverly made every know-nothing celebrity who, of course, supports the down-trodden look like fools. well done, Sir.

prisrob
TOP 50 REVIEWERVINE VOICE
4.0 out of 5 stars One Of LeCarre’s Lessers
Reviewed in the United States on November 15, 2018
Verified Purchase
Diane Keaton plays a young woman who becomes a spy during the Israeli/Palestine conflict. This is an excellent role, and she is quite good. I turned to this 1984 film to revive my memory for the upcoming series on AMC.

The film reminds me that this is not one of John LeCarre’s best works. Part of the story is quite unbelievable, recruiting an unknown young woman to play part of a plan to source out a big spy from the other side. A lot of effort goes into the making of this new spy, and this was not the best film.

Charles Gorodess
5.0 out of 5 stars Who can say enough good things about this movie
Reviewed in the United States on June 11, 2015
Verified Purchase
John le carre has pulled off a remarkable,feat. While constructing a story whose framework,is sympathy for Israel and the ruthless methods it employs to.protect itself, it still manages to make the Palestinians sympathetic and having a political narrative just as compelling as Israel's.. Diane Keaton manages to,act,in her usual slightly ditzy way but does not screw up her role. Her lover needs acting lessons immediately.
Overall, the realism comes through and the last scene where the Palestinian head of,the movement realizes he has been betrayed and about,to,be murdered is horrific and convincing. Who can say enough good things about this movie?
Read more
9 people found this helpful
Helpful
Comment Report abuse

Amazon Customer
5.0 out of 5 stars LeCarre's Story to the Screen without Loss
Reviewed in the United States on January 30, 2013
Verified Purchase
Le Carre has crafted some of the finest 'spy' literature ever published, and this tale is first rate, which makes the fact that the film so completely captures both the story and the characters so delightful. I was rather surprised at how well Diane Keaton slipped into the role of the 'actress' and very soon I had forgotten her other roles and she had become Le Carre's creature through and through. The tale of tit for tat killings and reprisals made the subject of the book and this film, although dating to the late 70's and early 80's (the film was released in 1984) is still fresh, sadly, and the subject of virtually constant fresh headlines, as the 'Palestine' issue seemingly will never, ever, be resolved, and the protagonists still play at their deadly exhange of death, revenge, and more death. It was a fine book, and a very good and entertaining movie.
Read more
7 people found this helpful
Helpful
Comment Report abuse

R. Edward Merrell, Jr.
4.0 out of 5 stars “What have you done, really? Gotten yourself filmed in one demonstration or another in Trafalgar Square?"
Reviewed in the United States on February 11, 2013
Verified Purchase
This is an excellent espionage thriller adapted from the equally excellent John le Carre novel. Superbly crafted by George Roy Hill and starring Diane Keaton in an off-type role for her…although Keaton has the range to play any role well. Le Carre co-wrote the screenplay and has a small part in the film. The novel is so complex and has so many characters and plotlines, that it is difficult to portray it in a theatrical release…but the le Carre screenplay and Hill as director, it is done about as well as can be done. Keaton is Charlie, a repertory actor, who is shallow in her sociopolitical views. But she has a reputation for being pro-Palestinian…so naturally she is recruited by the Israeli Mossad in their effort to track down a killer and terrorist, Kalil (Sami Frey). She is recruited by the mysterious Joseph (Yorgo Voyagis) and indoctrinated by Martin Kurtz (Klaus Kinski) who heads up the Mossad unit assigned to Kalil. Among the many characters, look for David Suchet as a Palestinian operative and Bill Nighy as one of Charlie’s co-actors in the repertory company. I’m betting this one will keep you on the edge of your seat…it did me!
Read more
5 people found this helpful
Helpful
Comment Report abuse
See all reviews

pinkmouse
4.0 out of 5 stars Not Quite Drummed Out
Reviewed in the United Kingdom on May 28, 2017
Verified Purchase
This is an adaptation of the book which is quite truthfully done except that in the novel Charlie is British not American. I feel it does fundamentally change the tone of the whole thing. Diane Keaton is superb but I just felt it needed a British actress. A small carp but I think when you have read the book (quite a few times) listened to the spoken word more times than I can count, then you develop your own idea of how the film should be produced.
Read more
6 people found this helpful
Report abuse

Edward
3.0 out of 5 stars Good attempt to bring Le Carre's novel to the screen.
Reviewed in the United Kingdom on January 20, 2018
Verified Purchase
A good attempt to bring John Le Carre's novel of the same name to the screen. If you've read the book then you'll understand the story but if you haven't then you may find it a bit difficult to get a handle on all the storylines. Nevertheless it's an interesting movie well worth a viewing.
Read more
One person found this helpful
Report abuse

Crissie
5.0 out of 5 stars Rare movie
Reviewed in the United Kingdom on October 31, 2015
Verified Purchase
I was glad to finally get this one on DVD. Although about 40 years old the item of this movie seems to be kind of up to date nowadays. Klaus Kinsky in one of his rare rolls where he did not play a (entirely?) bad guy.
Read more
4 people found this helpful
Report abuse

David
5.0 out of 5 stars Nostalgia
Reviewed in the United Kingdom on May 14, 2020
Verified Purchase
I felt that I had to watch it again in view of the new BBC series.
TBH I preferred this film.
Read more
Report abuse
See all reviews