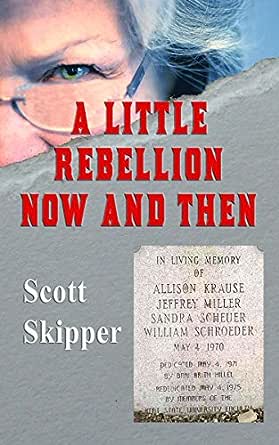 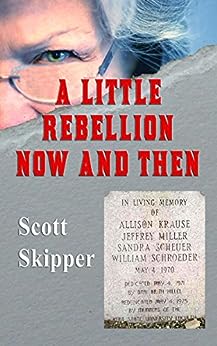 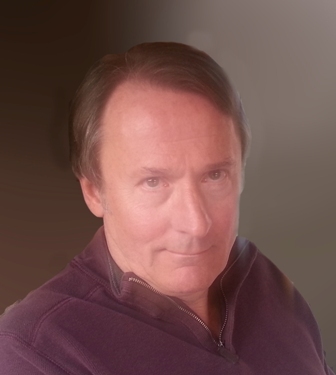 A Little Rebellion Now and Then: A Tale of Two Eras Kindle Edition

Scott Skipper is a California fiction writer with a broad range of interests, including history, genealogy, travel, science, and current events. His wry outlook on life infects his novels with biting sarcasm. Political correctness is taboo. His work includes historical fiction, alternative history, novelized biography, science fiction, political satire, and now a love story. He is a voracious reader and habitual and highly opinionated reviewer. Learn more at www.ScottSkipper.com Follow on Twitter @SSkipperAuthor and Facebook/ScottSkipperAuthor --This text refers to the paperback edition.

Jhawker
5.0 out of 5 stars A Little Rebellion and a Lot of non-stop action
Reviewed in the United States on January 8, 2018
Verified Purchase
For those of us who came of age during the turbulent hippy-dippy 60s and 70s Scott Skipper’s A Little Rebellion Now and Then: A Tale of Two Eras, will have a special resonance. It is also a book the P.C. Nazis will hate.
Kate Baker, who tells the story in the first-person, is an iconoclast of the first magnitude—a pull-no-punches reporter who begins her journalistic life in the 60s & 70s writing for an anti-establishment paper called The Toad. It is just after the killing of students at Kent State when we pick up Kate’s story. For those of us who actually covered that story, as I did when I was a newly-minted reporter for the Chicago Tribune, Kate’s reporting recounts some of the of theories we heard about the shooting at the time, including mysterious snipers, etc.
From that point on, the book bounces back and forth between the 1970s when Kate was a young woman and what appears to be an America of the “near future” when Kate is perhaps 40 years older and a successful novelist. Her book, "Satan's Angel" tells the story of a U.S. president who is murdered by a genetically engineered fruit in which deadly oleander is mixed with a fig.
Apparently, her book is too close to the truth and that sets the government on her trail. Her phones are tapped, she is pursued by drones, and Feds are, seemingly, behind every bush. It is a different America. For one thing we have a Muslim president along with what Skipper describes as “knife brandishing jihadists spilling from their sharia zones.” Not a very pleasant place—especially for a brash reporter like Kate.
Remember what I said about political correctness? This is not a book for those who strive for a world where speech they don’t like is banned and the First Amendment is a distant memory. That is the world we find Kate railing and fighting against (and one that doesn’t seem THAT far away if a few far left-leaning zealots are able to ban any discourse they don’t agree with).
Scott Skipper is a master at crisp, believable dialog containing biting wit and sarcasm. His characters are well-developed and believable and he clearly has done significant research on the 1970s and the May 4, 1970 Kent State massacre when 28 Ohio National Guardsmen using M-1 rifles fired 67 rounds during a 13 second period killing four unarmed students and wounding nine others who were part of an anti-Vietnam War protest.
A Little Rebellion Now and Then is an easy and delightful five-star read filled with a plethora of fascinating characters and events.

W. Stuart
4.0 out of 5 stars Satire and the 70's!
Reviewed in the United States on November 7, 2017
Verified Purchase
I saw this cover on Amazon and it intrigued me. In light of the world in which we currently live, I decided a little satire might be just the thing. I took a chance on A Little Rebellion Now and Then by Scott Skipper. Read on for my opinion!

Synopsis (from the author): When a leftwing activist from the Nixon era morphs into a conservative writer of political incorrectness, can she ever escape the evil eye of the establishment? Political winds may shift but some things never change. If you pull on the dragon’s tail, you’d best be ready to take some heat. Kate is no stranger to a jail cell, but she thought she got past that four decade ago. Then again, in a world run amuck with knife brandishing jihadists spilling from their sharia zones, maybe a jail cell is the safest place to be.

What I liked: I enjoyed the parallel stories of Kate in the 70’s and her adventures in contemporary America. The common thread between the two eras (government) and how Kate fought it from two perspectives was a unique approach. Scott Skipper captured the 70’s drug use and lingo well, and Kate’s current predicament was reminiscent of Big Brother. Overall, A Little Rebellion Now and Then was an entertaining read.

What I didn’t like: The story had a few gaps that left it incomplete for me. For instance, more on how Kate morphed her political views would help provide continuity. Her children didn’t appear until near the end of the book, and they seemed almost an afterthought and didn’t add much to the tale. Issues like that took me away from the meat of the book.

Overall impression: A Little Rebellion Now and Then by Scott Skipper was a good read. Though not my normal genre, the book entertained me with its satirical look at issues, while giving a raw account of the 70’s counterculture and current events. I recommend this one to anyone over 18 who enjoys a flashback to the Kent State era and the current political climate.

Joy Nwosu Lo-Bamijoko
VINE VOICE
4.0 out of 5 stars Book Review of A Little Rebellion Now And Then by Scott Skipper
Reviewed in the United States on October 7, 2017
Verified Purchase
I started reading Kate’s story, thinking that the writer must be a woman, unless, I want to believe that Scott is now a woman’s name. It could also be that the story of Kate is really that of a man who has chosen to tell this story in a woman’s voice. And yet again, if Kate was really a man, could he had gotten away with all that Kate got away with? I doubt that, which is why I believe that this story is in Kate’s voice to show the resilience of women in the face of what Kate had to go through.

Kate became a journalist at a very young age. One of those rebellious ones that constantly walk into the Lion’s den, knowing she could be mauled by the Lion, but not caring, anyway. Unfortunately for her, the Lion, in this case, was the government. She squared against the government, and got shut down so badly that were it not for Roger, her long-suffering friend, and supporter in every way, she would have been history.

She falls foul of everything, and everyone; the government, the Muslim cartel, even people who recognized her, and did she stop? No! People like Kate don’t stop until they get killed. Kate survived several attempts on her life, but still, she fought on. I admire her spirit, but I fear for her. There are writing errors, of course, that the author should check and correct.
Read more
Helpful
Comment Report abuse
See all reviews

Harmony Kent
4.0 out of 5 stars Fun and easy read
Reviewed in the United Kingdom on November 19, 2017
Verified Purchase
A satirical fictional look at America then (1960s) and now. Between Nixon, Vietnam Nam, Watergate, and a Muslim present-day president, it doesn’t seem to pay to be a political activist/journalist/author. Written in first person, we meet Katie Baker along with her strong views and a whole host of colourful characters. Persecuted by the Feds in the 60s and dogged by a drone in the here and now, Katie finds her life turned upside down time and again. And, just when she thinks things can’t get any worse ... they do! When (and how) will it ever end?

I found this a fun and easy read, and it gets a solid four stars from me.
Read more
Report abuse
See all reviews