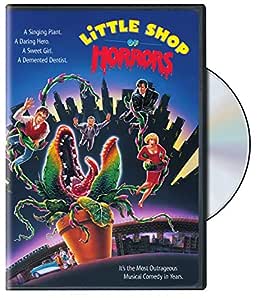 Seymour is a young man who works in a flower store. He manages to create a carnivorous plant that feeds on human flesh. Nobody knows about it, so Seymour and the plant become good "friends". The plant needs food to grow up, so it convinces him to start kill-ing people.

The Little Shop of Horrors is presented on Blu-ray courtesy of Legend Films with an AVC encoded 1080p transfer in 1.33:1. This is the second open matte presentation Legend is releasing this week (the other is Plan 9 From Outer Space). Unlike Plan 9 From Outer Space, there really aren't any framing issues per se to mention (the theatrical exhibition aspect ratio was 1.66:1, so the difference is fairly minimal as these things go). The elements used for this transfer have some fairly substantial damage and age related wear, including lots of scratches, flecks, and other marks, as well as some missing frames (notably at Jack Nicholson's first entrance in the film). Otherwise, though, things look at least acceptable, with decent sharpness and clarity and some actually fairly good to excellent contrast and black levels. There does appeal to have been some fairly liberal noise reduction applied to this release, so DNR-phobes are forewarned. As with Plan 9, Little Shop has had its fair share of shoddy home video releases, and relatively speaking this is one of the better looking ones. That may be damning with faint praise, but the image here is generally quite good and stable if not mind blowingly awesome. As is Legend's modus operandi, both the original black and white version as well as a colorized version are included. The colorized version is rather conservatively done, as also is Legend's standard operating procedure. It isn't as bothersome as many of these colorized versions tend to be, but purists still will probably want to opt for the original black and white version.

The Little Shop of Horrors features a mono soundtrack delivered via a fine sounding lossless DTS-HD Master Audio 2.0 mix. There's nothing very spectacular about this track, but it gets the job done, with the only real damage related to some of the missing frames, as well as a couple of stray pops and the like. Voices come through cleanly and clearly and Katz's "original" score sounds fine, if often strangely anachronistic. There's enough low end for Audrey Jr.'s booming voice (voiced by the film's writer, Charles S. Griffith) to sound nicely menacing, but there's nothing approaching any contemporary levels of LFE. As long as expectations are set accordingly, there shouldn't be any major complaints about this track.

Seymour--an orphan and a nerd who works in a run-down flower shop on Skid Row--spends his time doing menial tasks and dreaming of his co-worker, Audrey. Then, one day, just after an eclipse of the sun, Seymour discovers a strange plant. The exotic plant draws customers, saves the flower shop from bankruptcy and makes Seymour a hero in Audrey's eyes. But the plant has a rather unique appetite ... and it's getting interested in Audrey too.

Page 1 of 1 Start overPage 1 of 1
This shopping feature will continue to load items when the Enter key is pressed. In order to navigate out of this carousel please use your heading shortcut key to navigate to the next or previous heading.
Back
Next
Pages with related products. See and discover other items: john candy movies, john candy, steve martin movies, Little Shop of Horrors Plants