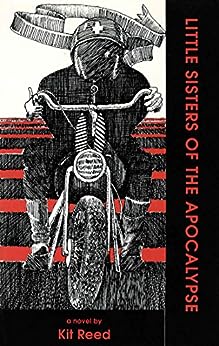 by Kit Reed (Author) Format: Kindle Edition
See all formats and editions
Sorry, there was a problem loading this page. Try again.
A motorcycle gang of nuns rides out on a mysterious rescue mission in this dazzling work of metaphysical science fiction by Kit Reed.

This scarifying trip into the near future provides an extraordinary look at women in the contemporary world.

Marooned on Schell Isle in a pre-apocalyptic near future, the women are waiting. The men have all gone to war - the ultimate sexist act. When he comes back will he be welcomed? It's an open question. But today is the day everything begins to change. What unknown force is rushing towards the island? What do the women have to fear? Is it the murderous Outlaw family, riding their way and bent on revenge, or the men, or an enemy within?

But the bikers are coming: sixteen in all, in black helmets emblazoned with a silver cross, metaphysical infonauts who run computer programs in a ceaseless search for the name of God. They pray for the dead and when they have to, they ride out on their bikes to defend the living. Until they lift the face plates you will not know who they are. Watch out for them. The Little Sisters of the Apocalypse.


"A touching tribute to the author's mother, a bittersweet space-age tale on the nature of women and loss." - Kirkus Reviews

"Her stories are sharp, transgressive and full of the unexpected, with enough keen social observations to launch a thousand dissertations. " - Chelsea Cain in The New York Times Book Review

In Reed's 14th novel, autobiography shanghais fantasy and scuttles it, in prose that is sometimes energetic, sometimes awkward. "K.," whose mother is dying, makes up a story of the future, in which the men of Schell Isle have gone to war without saying where they went. Five years later, their women are so independent and embittered that half have armed themselves against the men's return. Threatened by internal dissension and external attack, they are aided by an order of motorcycle-riding, computer-hacking nuns, the Little Sisters of the Apocalypse. Meanwhile, in interpolated autobiographical snippets, K.'s mother and two good friends die. The denouement of the fantasy is that there is no convenient apocalypse. In fantasy or the real world, life goes on and so do we. The fantasy and K.'s autobiography complement one another to provide this moral, but the fictional world is incomplete and cartoonish. Her vivid characters, once they have advanced the plot, are dumped like unwanted toys, and K.'s austere authorial voice reels off a list of observations on life and art that are unfortunately shallow. Had Reed not twisted the novel to fit her purpose, it might have been lots of fun, and had a meaning of its own.
Copyright 1994 Reed Business Information, Inc. --This text refers to an out of print or unavailable edition of this title.

From Reed (Thief of Lives, 1992, etc.) a story on two levels- -one far from real life, and one (we can only assume) directly connected to the author's heart. An intermittent secondary narrative informs us that K's mother is dying and that K, a writer, must construct a narrative--so that she can offset her sadness by creating something with perfect closure. (By the end, it is clear that K. is Reed.) The resulting, futuristic narrative is diverting: It concerns the abandoned women of Schell Island, Ariz., whose husbands have for five years been away at war; the plotting by the nearby Outlaw clan, who have been displaced by the families of Schell, to regain their home territory; and the arrival of the Little Sisters of the Apocalypse- -biker nuns who wear leather and are expert computer hackers. The scene on Schell is tense: Chag, a poet and (in the men's absence) lieutenant governor of the island, is secretly hated by the beautiful, bitter chief of police, Courtney. When the Little Sisters arrive, Courtney somehow sees it as a plot. Meanwhile, Queenie, head of the Outlaws, views all the Schell women as ``walking Barbies.'' There are, however, a few men left on the island--the 4-F dirtbags Squiggy and Kitten Joe. Courtney enlists them to fight the Little Sisters, starting out by getting Squiggy to rape head Sister Trini. But Kitten Joe mobilizes his army of cats (!) to stop Courtney at a crucial moment. The fundamental idea here is that women have many ways of dealing with loss: Enforced closure (end dependency, kill the men, start over as new women) is the quickest way, but sometimes life demands a more complicated response. Though it seems intended as a bonk-you-over-the-head novel of ideas, it ends simply as a touching tribute to the author's mother, a bittersweet space-age tale on the nature of women and loss. -- Copyright ©1994, Kirkus Associates, LP. All rights reserved. --This text refers to an out of print or unavailable edition of this title.

Mistyruse
1.0 out of 5 stars A very definite no.
Reviewed in the United States 🇺🇸 on July 29, 2015
It's not often I remove a book from my kindle without finishing it first. This was one of those books. While the premise is interesting, I just couldn't take much more reading about the women on the island hanging their entire existence on the men, defining themselves by what the men do, say, think, need, might thing etc etc. It felt like the same ideas were just repeated again and again and again. Nope, 25 % in I hit the delete button....
Read more
One person found this helpful
Helpful
Report abuse
See all reviews
Report an issue
Does this item contain inappropriate content?
Report
Do you believe that this item violates a copyright?
Report
Does this item contain quality or formatting issues?
Report