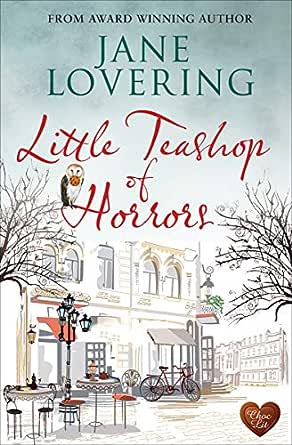 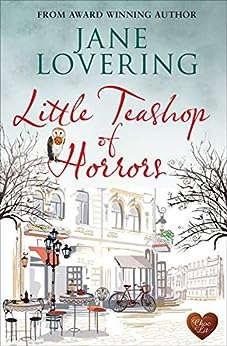 4.5 out of 5 stars
4.5 out of 5
81 global ratings
How are ratings calculated?
To calculate the overall star rating and percentage breakdown by star, we don’t use a simple average. Instead, our system considers things like how recent a review is and if the reviewer bought the item on Amazon. It also analyzes reviews to verify trustworthiness.

Anissa Annalise
4.0 out of 5 stars Adored it!
Reviewed in the United States on April 16, 2017
Verified Purchase
When springtime rolls around I'm always in the mood for a little chick lit and I tend to like the British variety. So when I saw that this had a setting of a teashop and a great house, I was already half in. When I saw that this had two main characters that had had their self esteem whittled down but still weren't bitter and tried hard, I was all in. I promptly requested this on Netgalley, was quickly denied so I bounced over to Amazon to buy it. When the reading heart wants what it wants it can't be denied & this was exactly the kind of read I hoped it'd be. Simply put, I adored this book.

Amy & Josh were wonderful to follow and I enjoyed watching them both grow beyond the hurts their pasts had doled out so that they could carve out better lives. I felt that their fits, starts and even their retreats were realistic and well done. In addition, the supporting characters were sometimes surprising. And of course, there was cake. I admit to stopping while reading so I could look up recipes. While there was quite a bit I knew would happen, the reveal and unfurl was so enjoyable so I didn't mind. I'd love to read another with these two. Also, Gran was great (loved the resolution to the spoons & curtains). The alternate POVs was nicely done & didn't simply show the same scene from the other person's pov so the story never stalled. There were also some true LOL moments that were highlight-worthy. Also points to the cover art. I don't know what it is but these sorts of covers always make me want to pick them up and read.

This was my first read by Jane Lovering but won't be my last. Highly recommended if, like me, you like your romances alpha-hole free and also like to be reminded that kindness & niceness do sometimes win in this world.
Read more
2 people found this helpful
Helpful
Report abuse

Well... I have found the perfect romance for my friends that have an aversion towards romance books… there will be no eye rolling in this unusual and very delightful romance… there is no alpha male or sophisticated heroin… there is no Insta love, no walk of shame in the morning, no angst… what there is though is lovely real characters... characters you would actually meet when walking down the street... a beta hero who you’ll fall in love with… and a heroin who does not have a mean bone in her body…

Amy our heroine was so lovely…. Always worrying about everybody, always there for everybody, with the exception of herself… it was almost heartbreaking at times how little Amy thought of herself, when she was such a capable and wonderful person…. Josh our beta hero was very secretive and very damaged, my heart broke for him as well.... The relationship between these two developed so sweetly and at such a realistic pace... shoot it almost developed too slowly and how often does that happen in a romance?

Along with Amy and Josh was a cast of amazing and quirky secondary characters…. The setting was also interesting a historical hall, with a tea shop, and a birds of prey show…. Now I am not a bird person, but I will make an exception for Skrillex the owl…. This was a delightful book filled with laughs, love, and food…

Nancy
5.0 out of 5 stars Wonderfully Delightful Novel!
Reviewed in the United States on October 21, 2019
Verified Purchase
I absolutely loved this awesomely sweet and insightful novel. The characters were written with such compassion, depth, and tenderness that they simply became real as you absorbed this beautiful book about the day-to-day responsibilities of running Montpark Hall, a National Historical Trust Property, and the dedication and love with which those employed by the Trust felt for the property and the familial ties of those who had gone before.

The two main characters had their flaws, but they were "inward" flaws that only hurt themselves, and the author was so perfect at gently coaxing these into focus as you continued the novel. She presented the perfect little community where everyone could have fit in any neighborhood in any part of the world and been at home, flaws and all, worries and all.

Jane Lovering's writing talent is superlative, and I finished this novel absolutely wishing there was a follow-up to tell more of Amy and Josh's story and the future at Montpark Hall. Will just have to check out more of Ms. Lovering's writing and definitely recommend her as a writer to invest in reading!
Read more
Helpful
Report abuse
See all reviews

P. C. Fenton
5.0 out of 5 stars Her best book yet!
Reviewed in the United Kingdom on March 28, 2017
Verified Purchase
I have read and loved all Jane Lovering’s books and can never get enough of her quirky sense of humour or different, but amazing, heroes. This, however, was probably my favourite of all her books – it is, quite simply, wonderful! The hero is so unusual he shouldn’t work as a hero at all, but he does, beautifully. He grows on you slowly but surely, and as he emerges from the deep shadows in which he’s been dwelling, the reader falls in love with him just as the heroine does. And the heroine – chubby, not exactly model material, and too nice for her own good – has you rooting for her from the word go. The author writes about serious issues, but with such warmth and humour you can’t help but want to read on. I was left feeling bereft when I had to leave these characters at the end of the story and if this novel doesn’t win lots of awards, there is no justice in this world! Absolutely fabulous!
Read more
6 people found this helpful
Report abuse

CathyR
4.0 out of 5 stars Very enjoyable
Reviewed in the United Kingdom on June 1, 2018
Verified Purchase
The story focuses on Josh and Amy, with alternating chapters from each of their perspectives, two people with completely different backgrounds and experiences of life. Amy runs a tea shop at Monkpark Hall with her best friend Julia, on behalf of the Heritage Trust. The Trust has appointed a new manager and Edmund Evershott has lots of plans for Monkpark Hall. The fate of the tea shop is anyone’s guess. It’s more than a job for Amy, she and her grandmother live in a cottage in the estate village, if she loses her job she and her grandmother lose their home. Amy’s life revolves around the tea shop and looking after her Gran, a blunt speaking lady who can be trying at times. She’s resigned to being plain, overweight Amy who pales into insignificance next to her vibrant, pretty and selfish friend. She’s kind and clever but lacks confidence in herself.

Josh’s story is much darker, and the shadows from the past have influenced the way he lives his life hugely. Flying his birds of prey for visitor demonstrations in Monkpark’s grounds and living in an old dilapidated caravan, he keeps himself fairly isolated apart from popping into the cafe for leftovers. He and Amy build a friendship of sorts but Josh does his best to hide his good looks with untidy hair, scruffy clothes and a stubbly face. Uncomfortable with most people and terrified of small, dark or enclosed spaces, he’s happiest with his birds. They accept him as he is and he can relax when he’s with them.

One of the things that made this story more realistic and enjoyable for me was the fact that a romantic relationship didn’t miraculously solve personal problems and issues, particularly Josh’s. He isn’t the likeliest of male leads but he’s a sympathetic character who grew on me quite quickly. There are mountains he still has to climb, although they are reducing in size.

The easy to read narrative flows well with warmth and quirky humour balancing out the darkness of the story. It covers quite a mix of emotions and issues including PTSD, friendship, fear and deception. A very enjoyable read.
Read more
2 people found this helpful
Report abuse

Kindle Customer
5.0 out of 5 stars Little Teashop of Horrors
Reviewed in the United Kingdom on June 11, 2018
Verified Purchase
Jane is fast becoming one of my favourite romance authors (after Kirsty Ferry  natch :) ). I never used to read romances and still aren't a fan of many but I love Jane's because there's always a twist, always someone with a secret and I enjoy trying to work it out. I'm about 50/50 so far with the one's I've read. And I half got this one.

I'm still trying to work out where the 'horrors' come into the book although once you hear Josh's backstory then I guess that would fit as it's quite awful but that aside I do love the title. It grabs you and makes you want to explore further.

The characters as always are richly detailed even the secondary ones. It's quirky, it's fun, there's a very slow burning romance and on occasion it'll make you sad but overall it's really life affirming.

This new novel offers the reader an emotional roller coaster ride blending humour, sadness, deep emotion and joy, and I found it very satisfying. I loved the heroine Amy, identifying with her right from the start, and I got on very well with the hero Josh. He came across as very real, very vulnerable and - in the end - very lovable. There are cakes, a gorgeous stately home, birds of prey and a deliciously awful bad guy, too. What more could I ask? A 5* read for me. You'll love it, I promise you.
Read more
Report abuse

Rosemary e Walters
5.0 out of 5 stars Little Teashop of Horrors by Jane Lovering
Reviewed in the United Kingdom on June 11, 2018
Verified Purchase
I really enjoyed this book.
Jane has a wonderful descriptive style of writing, which draws the reader into the story line.
Her characters are real, and her approach is both sensitive, and humorous.
There is sadness, and laughter, sensitive story lines. And the bad guy gets his just rewards, and the good guys prevail and are happy together, what else do you need from a good book.
Read more
Report abuse
See all reviews