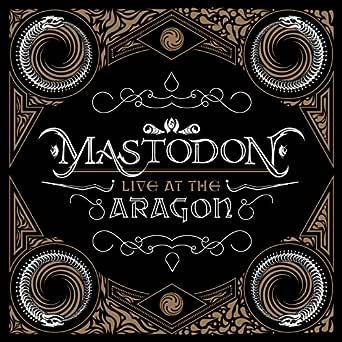 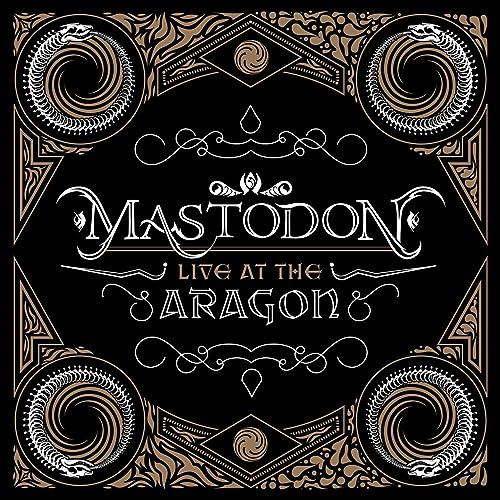 Live At The Aragon

Listen Now
Buy MP3 Album $13.49
Your Amazon Music account is currently associated with a different marketplace. To enjoy Prime Music, go to Your Music Library and transfer your account to Amazon.com (US).

Ian M. Perge
4.0 out of 5 stars A Live Album That Does More Than Justice To The Studio Material
Reviewed in the United States on September 27, 2017
Verified Purchase
A caveat: I was at this show, and even caught in a few of the sweeping crane shots stationed near the back of the Ballroom... but not for Mastodon. Being a co-headlining tour, my Better-Half & I had made the 6+ hour drive (that's what you learn to do when you want to see Live Shows but live in the Midwest... our closest "Big Concert Cities" are St. Louis at 2.5 hours west, and Nashville 3 hours south-east) to see one of our all-time favorite bands, Dethklok. I don't believe I had heard *1* of Mastodon's songs before that show.

...boy, was I stupid. The sheer luck of seeing "Crack The Skye" in it's entirety live was a jaw-dropping experience, and the last 3rd of the set a nice choice of previous material just sucked me in deeper. During the Aftershow - my Better-Half & I are lucky enough to be good friends with a couple members of the Dethklok "Live Band", and are hooked up with goodies such as free tickets & aftershow passes - I quizzed my friends on just how did I miss out on Mastodon for so long at that point, and why did they not clue me in?!? Upon proper chastisement, I was informend that their back catalog was just as good and to jump on the train asap. We were also luck to see their next show a few days later in Indianapolis, and after being a slight bit more familiar with the material once we returned to our home, I ordered their complete catalog from Amazon immediately, and managed to snag all of the 2-disc Limited Edition versions. (Also, that after the Indy show I was able to head over to the venue's Private Bar with my Dethklok compadres, most of Mastodon and various and have a few drinks and not act like a "fanboi" but as a Regular Guy was a highlight of my Concert Lifetime!) I've also become a big fan of their post-CTS releases and seen them numerous times since.

But back to the "Live At The Aragon" release. Yes, the vocals aren't 100% compared to the studio version - this album in particular is harder on their voices. But to their credit, they didn't replace the tracks with "Live In The Studio" takes apart from a few mic volume issues. That makes it refreshing that they released a "warts 'n all" live release. But everything else is mixed extremely well, and is a great-sounding CD.

As for the DVD, it's the reason I'm deducting 1 Star despite what seems to be a glossy review. It's only the fact that is *is* a DVD, and not a Blu-ray for a concert taped in 2009. The DVD itself is quite good: I've seen far worse when played back on a Hi-Def set-up. But simply thinking how much better it could have been solidified this decision.

I HIGHLY recommend this CD/DVD set, for fans of the band or someone wanting an "Entrance Point" as I got that evening. It's a great CD, a far-more-than-adequate DVD for an extremely reasonable price, and a fantastic piece of music performed.

Joseph Tingle
4.0 out of 5 stars As Metal as we get-- warts and all
Reviewed in the United States on March 29, 2011
Verified Purchase
Mastodon are, to be honest, a band that has only won me over recently. Unfortunately, it took me years to seperate them from the many craptastic bands which are loosely grouped together under the banner of "New Wave of American Heavy Metal." When I picked up last year's "Crack The Skye"-- an album about wormholes, imperialist Russia and the suicide of drummer Brann Dailor's 14 year old sister Skye (to name a few things)-- I realized I'd cheated them. Mastodon have got something going on here. Really, Mastodon are what metal-- no, music-- is all about, warts and all.

Let me explain that to you, my now-oh-so-skeptical reader. Mastodon is not just as metal as we get, but Mastodon is the "tradition of metal." Or at least their last album, "Crack the Skye," was. Take the doomy, occult-laden atmosphere of Black Sabbath, combine it with Iron Maiden's penchant for the 'fine-arts' of literature and drama, Motorhead's realness and grit, Dream Theater's willingness to turn what the genre of 'metal' can actually mean on its head and, finally, a contemporary sound that only a modern band can offer and you have Mastodon. If you love metal, I don't understand why you wouldn't like this band, unless you're one of those purist guys who care more about clinging to stylistic carrion than you do about appreciating music.

Anyway, "Live at Aragon" is a necessity for Mastodon devoutees and a good point of departure for new fans. It includes a full live version of what I consider to be their latest and greatest, as well as a handful of older classics from their sludgier roots.

A quick word about the vocals, which have been a frequent subject of complaint about this live-set. As I said above, this is metal, "warts and all." Before singers like Rob Halford and Bruce Dickinson were mythologized and every metal band had to have an awesome, allegedly "classically trained" vocalist, things were a lot rougher around the edges. With Mastodon, you get three less-than-stellar voices:

There's the bassist, who's got a really cool yelp but consistently fails to hit the high-notes. Then you have the drummer, who's got a great machine-like Maynard Keenan impression going. He's the most on-key, but he sings relatively few parts and his voice doesn't really have much character. Finally, there's the guitarist. His voice has the most character, but is the hardest to swallow, but getting used to it is worth the endeavor. His high-pitched quivering slurs genuinely sound like the voice of someone who's just woken up from of one-too-many mescaline-inspired "vision-quests"-- it's got an ancient, shamanistic quality to it. These three, when singing alone, do sound a bit weak. But when they harmonize together, it creates this awesome semi-discordant chorus that is just way too cool and has way too much character to resist.

And that, my friends, is Mastodon. The whole is indeed greater than the sum of its parts. For $15, this DVD/CD live set is a steal. Check it out, especially if you don't know anything about Mastodon already.
Read more
16 people found this helpful
Helpful
Report abuse

Mick Schnabel
5.0 out of 5 stars an amazing concert(wish I was there)
Reviewed in the United States on March 25, 2011
Verified Purchase
At first I wasn't quite sure if this was going to be any good by the "previews" I had seen.The previews didn't really have any higlights(mostly lowlights-with the singing sounding pretty bad at times) HOWEVER,once I popped it in,I was stunned..great sound quality and great video(my only grip is its NOT available in blu ray-hopefully SOME day though!) If you LOVE Crack The Skye,this is a MUST own for sure! The DVD also gives you the option to listen to the entire album in surround sound with trippy background images to acompany the songs,which is a nice little bonus...havent listened to the Cd that came w/ it because I feel that,if I want to hear it live..and I have the option to WATCH it being performed?..then thats the way to go.Mastodon fans-GET THIS!
Read more
3 people found this helpful
Helpful
Report abuse

Kam Domber
5.0 out of 5 stars Great Live Album
Reviewed in the United States on January 11, 2016
Verified Purchase
Awesome live album from an awesome band. I know that live albums aren't for everyone: but I think they have more emotion and feel more real. This album is mostly populated by songs from their album Crack the Skye: so it leaves a bit to be desired from their other prior albums. Overall though, this has a decent sound, decent track listing, and a decent DVD of the live concert. I would definitely recommend for any devout Mastodon fans.
Read more
One person found this helpful
Helpful
Report abuse

K. Box
4.0 out of 5 stars where do they go next?
Reviewed in the United Kingdom on May 20, 2011
Verified Purchase
Since Mastodon dropped all the growly shouty stuff 3 albums or so ago they've become one of the more interesting metal/prog bands. The musicianship is outstanding, the arrangements smart and fairly complex, as well as being cleverly multi-layered. I saw this tour when it did the u.k. and whilst I enjoyed it, the sound could have been better. I'm glad that most of those problems aren't evident on this recording, and if you haven't seen them, this is the next best thing. There are minor niggles with the sound and some of the camerework, but what the heck . This is a great band who've moved on from their roots without losing their aggression - it's just been channelled into something more ear friendly, and thus they'll reach a bigger audience without having to sell out or compromise too much.What they'll do next I don't know. I hope they haven't peaked too soon. As for the film used as a backdrop to the live show with studio recorded music behind it, I think it's great. Weird, but great. I enjoyed it anyway.
Read more
2 people found this helpful
Report abuse

In some places the vocals are a bit weak, Brett Hinds battles to match the quality of his studio vocal sound onstage, while the far more consistent voice of Troy Saunders is sometimes subdued and almost lost in the mix. These flaws do not detract from the peformance, and by the time the band reach The Last Baron they are truly on fire, ripping through the complex structure of this song with exquisite brilliance.

The remaining songs are arguably not the best selections from the previous Mastodon albums, and watching the band leave the stage at the end of the show I couldn't help but wander whether this truly was the end, or indeed did they return to the stage for an encore which almost certainly would've included Blood & Thunder.

I'm thrilled with this package just for the full live performance of one of my all time favourite albums, which includes both the flaws and improvements of an honest live performance.
Read more
One person found this helpful
Report abuse

Mr. J. S. Dodd
5.0 out of 5 stars The new face of metal?
Reviewed in the United Kingdom on August 1, 2016
Verified Purchase
A brilliant concert and proves that metal is far from dead or even struggling so if you're stuck in the past try these out.
Read more
Report abuse

richard redman
5.0 out of 5 stars Five Stars
Reviewed in the United Kingdom on December 8, 2015
Verified Purchase
It's what you expect from mastodon very good cd
Read more
Report abuse
See all reviews