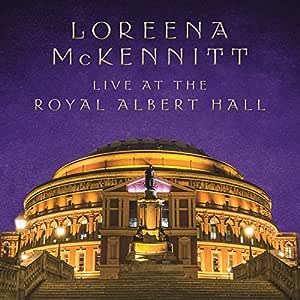 Loreena McKennitt (Artist) Format: Audio CD
4.8 out of 5 stars 175 ratings
See all 3 formats and editions Hide other formats and editions
Includes FREE MP3 version of this album.&nbspProvided by Amazon Digital Services LLC. Terms and Conditions. Does not apply to gift orders.&nbspComplete your purchase to save the MP3 version to your music library.
Available at a lower price from other sellers that may not offer free Prime shipping.

Two CD set in a 6 panel softpak featuring all 20 songs performed at the storied London venue during Loreena's Lost Soul European Tour. Includes seven songs that have never been previously released on live recordings and six songs from her latest album, Lost Souls. The Live At The Royal Albert Hall performance includes Loreena, her band and the five special guest musicians.

4.8 out of 5 stars
4.8 out of 5
175 global ratings
How are ratings calculated?
To calculate the overall star rating and percentage breakdown by star, we don’t use a simple average. Instead, our system considers things like how recent a review is and if the reviewer bought the item on Amazon. It also analyzes reviews to verify trustworthiness.
Top reviews

David West
5.0 out of 5 stars Sublime
Reviewed in the United States on February 24, 2020
Verified Purchase
What I don't get is how some people can just leave star ratings without any comment but...whatever.
I saw Loreena McKennitt a couple of years back performing a magical stripped down set with just she on harp and piano; guitars and cello with an occasional fourth on violin. It was simply divine and stretched my aural credulity way past breaking point to understand how three people could make such beautiful music. The squaring off between cello and guitar in The Bonny Swans was stunning....
Anyway, this album. Loreena's music is transcendental, it's the only word I can find for it. Some people might find the adjusted tempo of some of the songs a little jarring but she is a performer non pareil and ultimately she gets you where she's going. So what if it's another live album? There is a very generous smattering of new songs to justify the expense and The Two Trees is a very rare live performance; the older songs are taken down, polished up and set to work their own particular magic.
Whoever was there that night was given a real treat, for sure.

Amazon Customer
5.0 out of 5 stars Brilliant!
Reviewed in the United States on January 26, 2020
Verified Purchase
Amazing live versions of Loreena's songs. I'm expecting a Bluray version of one of these concerts. I had the opportunity to attend her performance in Buenos Aires and it must say that it was the best experience of my life...the CD is excellent, but her voice transcends it.
Read more
8 people found this helpful
Helpful
Comment Report abuse

HardBellSound
3.0 out of 5 stars This felt like a repackage of pieces on prior CDs but with less impact.
Reviewed in the United States on December 29, 2019
Verified Purchase
The MP3 seems to have lower sound quality than the CD. I received both. If you don't have her other CDs this is a fine hits collection. If you have most of her other albums, this doesn't add anything.
Read more
2 people found this helpful
Helpful
Comment Report abuse

Starlight 500
5.0 out of 5 stars Beautiful music, well worth the purchase!
Reviewed in the United States on December 5, 2019
Verified Purchase
Always love her music, this one, as with everything else I own, is wonderful!
Read more
One person found this helpful
Helpful
Comment Report abuse

Austin Helsel
5.0 out of 5 stars Buy it, you can't go wrong!
Reviewed in the United States on April 27, 2020
Verified Purchase
Can't get enough of her! So great!
Read more
One person found this helpful
Helpful
Comment Report abuse

Amazon Customer
5.0 out of 5 stars Wow .
Reviewed in the United Kingdom on January 31, 2020
Verified Purchase
This cd is above and beyond . So sad she has retired for now , but privileged to have seen her live twice . I love her to bits , her music is amazing .
Read more
One person found this helpful
Report abuse

Amazon Customer
5.0 out of 5 stars Great
Reviewed in the United Kingdom on May 9, 2020
Verified Purchase
I was there for concert, lovely to have this as a remindet
Read more
One person found this helpful
Report abuse

KP Nuts
5.0 out of 5 stars Loreena at her finest
Reviewed in the United Kingdom on February 14, 2020
Verified Purchase
Superb recording, a must have.
Read more
One person found this helpful
Report abuse