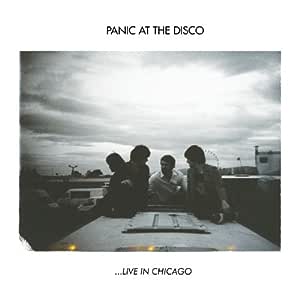 Add to Cart
$16.99
& FREE Shipping on eligible orders. Details
Sold by: megahitrecords
Add to Cart
$21.91
+ Free Shipping
Sold by: SpeedyHen
Have one to sell?
Sell on Amazon

Don't panic... but things really are shaping up to be pretty odd for
this Las Vegas based foursome. Panic At The Disco's highly anticipated
sophomore album debuted at #2 on the Billboard Top 200
chart back in March and things have shown no sign of slowing down
for the band. 'Nine In The Afternoon' and 'That Green Gentleman
(Things Have Changed)' proved to be follow-up hits to the band's
platinum-selling debut despite being a departure from their previous
sound. Filmed at the Chicago stop on the Honda Civic tour, this live
cd/dvd set showcases live versions of all the hits from both of the
band's albums and is a must-have for any diehard Panic fan. In addition
to the live audio and video, fans will get a sneak peek at life
on the road as illustrated by the tour documentary as well as a photo
gallery, music videos and bonus audio tracks.

4.6 out of 5 stars
4.6 out of 5
92 global ratings
How are ratings calculated?
To calculate the overall star rating and percentage breakdown by star, we don’t use a simple average. Instead, our system considers things like how recent a review is and if the reviewer bought the item on Amazon. It also analyzes reviews to verify trustworthiness.
Top reviews

Taylor
5.0 out of 5 stars Things are shaping up.
Reviewed in the United States on May 17, 2015
Verified Purchase
Let me begin by saying that I am longtime fan of Panic! and have been with them since the first album. That said, I believe I have a better appreciation for Live in Chicago now that I have seen them grow, and grow apart. With the recent departure of Spencer, Brendon is the last standing original member. When I listen to this album or watch the DVD portion, I always say, "those people in the audience have no idea how lucky they are to see Panic! live with the primary members." I have yet to see them live, but I just know it won't be the same without Ryan, Jon, and Spencer. Don't get me wrong, though, Dallon is great!
I also love hearing the difference in their sound, compared to now, where they have since released Vices & Virtues and Too Weird to Live, Too Rare to Die. It's a very interesting transformation.
I urge you to purchase this album because it is a great addition to any Panic! collection, but I also suggest giving The Young Veins a listen. After Ryan and Jon left, they formed TYV and have a sound similar to Pretty. Odd. It's very Beatles-esque and has beautiful melodies.

squirrel
5.0 out of 5 stars ryan ross - burrito boy
Reviewed in the United States on June 12, 2019
Verified Purchase
There’s a photo of Ryan Ross eating a burrito in here and I want to ask him to sign it next time I meet him. 10/10
Read more
Helpful
Comment Report abuse

Shelly Walters
5.0 out of 5 stars Perfect addition!
Reviewed in the United States on February 25, 2017
Verified Purchase
I'm a big fan of P!ATD so this is a perfect addition to my collection. The case was a bit broken when I got it but since it didn't hurt the discs themselves, I'm okay with it. I don't keep CD cases anyway. I can listen to them live all day!
Read more
Helpful
Comment Report abuse

Sanford4
4.0 out of 5 stars My daughter loves it!
Reviewed in the United States on August 31, 2011
Verified Purchase
My 13 year old daughter loves this CD/DVD package. I have listened to and watched it with her and while it is not exactly my type of music it does have entertainment value. I'm sure it was not made with a 52 year old man in mind but it does put a smile on my girl's face and that is what it is all about.
Read more
One person found this helpful
Helpful
Comment Report abuse

Fair Review
5.0 out of 5 stars Nice disk to have from Panic at the Disco.
Reviewed in the United States on January 12, 2017
Verified Purchase
Nice album and video of group.
Read more
Helpful
Comment Report abuse

Jeff
5.0 out of 5 stars If you like them buy it
Reviewed in the United States on April 27, 2019
Verified Purchase
Love the Live Performance. Lot of fun to listen to.
Read more
Helpful
Comment Report abuse
See all reviews

MelO
4.0 out of 5 stars A must for Panic! At the Discc fans !
Reviewed in the United Kingdom on January 17, 2019
Verified Purchase
Would recommend for all die hard Panic! At the Disco fans. My daughter asked for it for her birthday and she loves everything about it. She says it is amazing!
Read more
Report abuse

Amber
5.0 out of 5 stars I would watch this every day if I could.
Reviewed in the United Kingdom on May 30, 2012
Verified Purchase
I love this so much! I really like Panic and when I saw they had a live cd I was eager to buy it, and I'm very glad that I did. It arrived in very good condition in reasonable time. If you like Panic! at the Disco or similar bands such as Paramore or All Time Low I would definatley reccomend buying this especially since it's just like being at one of their concerts... well you know what I mean. Brendon (the vocalist) sings amazingly live and the DVD is good quality. It also has a cute documentary of the band which I also really like.
Read more
One person found this helpful
Report abuse

korrarya
5.0 out of 5 stars awesome
Reviewed in the United Kingdom on August 15, 2015
Verified Purchase
Awesome cd and dvd - favourite band - their voices are so amazing even live
Read more
Report abuse

luuby luu
5.0 out of 5 stars CD
Reviewed in the United Kingdom on January 29, 2013
Verified Purchase
This cd is the best from Panic at the disco because it has lots of their most well known songs on it. It is a great cd and Panic at the disco are amazing.
Read more
One person found this helpful
Report abuse

Mrs. L. M. Ko
5.0 out of 5 stars Panic at the Disco
Reviewed in the United Kingdom on January 4, 2010
Verified Purchase
I loved this CD/DVD, not only can you hear them live you can watch a concert too. Amazing, love PATD. Good as they are now not together any more as you see them here anyway.
Read more
2 people found this helpful
Report abuse
See all reviews