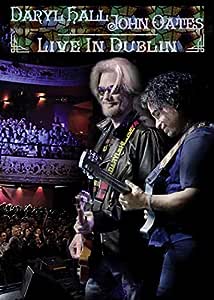 Secure transaction
Your transaction is secure
We work hard to protect your security and privacy. Our payment security system encrypts your information during transmission. We don’t share your credit card details with third-party sellers, and we don’t sell your information to others. Learn more
Details
Ships from
the_book_community
Sold by
the_book_community
Return policy: This item is returnable
You may be charged a restocking fee upto 50% of item's price for used or damaged returns and upto 100% for materially different item.
Read full return policy
New & Used (5) from
$43.88 & FREE Shipping

Daryl Hall and John Oates are one of the most successful recording duos of all time with a string of hit singles and gold and platinum albums to their name including six US No.1 hits on the Billboard Hot 100, all of which are included in this superb live show. Filmed at the Olympia Theatre in Dublin on 15th July 2014, this was the first time Daryl Hall and John Oates had played a live show in the city. They delivered a fantastic performance, packed with hits, to an audience who were clearly in the mood to party as only Dublin can! TRACKLISTING: 1) Maneater 2) Out Of Touch 3) Say It Isn t So 4) Family Man 5) It s Uncanny 6) Back Together Again 7) Las Vegas Turnaround 8) She s Gone 9) Sara Smile 10) Do What You Want, Be What You Are 11) I Can t Go For That (No Can Do) 12) Rich Girl 13) You Make My Dreams 14) Kiss On My List 15) Private Eyes / BONUS FEATURE: Interview with Daryl Hall and John Oates / FORMAT: NTSC Region 0 / SOUND FORMATS: DTS Surround Sound, Dolby Digital 5.1, Dolby Digital 2.0 / RUNNING TIME: 111 mins approx. / SUBTITLES (Interview Only): English, French, German, Spanish.

4.0 out of 5 stars
4 out of 5
89 global ratings
How are ratings calculated?
To calculate the overall star rating and percentage breakdown by star, we don’t use a simple average. Instead, our system considers things like how recent a review is and if the reviewer bought the item on Amazon. It also analyzes reviews to verify trustworthiness.
Top reviews

Aria Araya
5.0 out of 5 stars This Is Nostalgia KYLIE
Reviewed in the United States on April 30, 2012
Verified Purchase
Ok, so why the 5 stars? I'll get to this later. Ok, so I agree with the first reviewer...to some extent, on the downside of this DVD (when to me, is no downside at all). Yes, the picture is not so great, it looks like that the production company just copied the VHS on to disc, no digital transfer whatsoever, but is still watchable! I sat through the whole concert just fine enjoying the show. Yes, the concert is in 4:3 and not in the widescreen format that us Kylie fans are so used to with all Kylie's other concert DVD's, but remember that this concert was in 1991 when everything was still in 4:3 on VHS. Who cares, anyone with widescreen tv's can adjust the picture to 4:3 like me, that's not a problem at all with me. And the last downside to this DVD is, yes, that there are no special features whatsoever like the VHS and Laserdisc originally had. Obviously, the picture quality is not so great to begin with, so apparently when this was put on DVD, it was transfered in a 1 hour recording format and not 2 hours to keep the picture quality from getting worse, that explains the editing portion to shorten the concert to 1hr and 5min, thus no special features. Doesn't bother me there's no special features. So there you have it, you decide for yourself. As for me, none of this bothers me. Being a Kylie fan since 1987, this is a true gem for me. I live in the US, so the only available Kylie DVD's here in the states are Kylie's Parlophone, EMI era (2000-Present). Anything prior to that is not available for US market. I still long await Kylie's "Intimate And Live" DVD to be available here, but still to no avail. So yes, I was excited when this concert made its US debut. This is true Kylie nostalgia...before the bigger productions, before the bigger budgets, and before Kylie's Deconstruction and Parlophone Record era. This was when Kylie was still with PWL Records!!! The Record label that started it all!!! Thus, this is the only concert DVD available for US fans to see Kylie perform just Kylie's PWL hits. Ok, yes there was the "On The Go: Live In Japan", but that wasn't actually a live concert performance like this one is, but still good to own and watch, and Kylie only had 2 albums out at that time so not a long show. I love Kylie's old work just as much as I love Kylie's current work, so this is truly a must have for any Kylie collection!!! So my 5 star rating is for having this on DVD, available for US market, and having an hours worth of classic Kylie!!! By the way, this DVD is in DTS surround so I was a bit surprised. It is also in 5.1 and 2.0 as an option.
Read more
3 people found this helpful
Helpful
Report abuse

travel gal
5.0 out of 5 stars Amazing Hall and Oates concert!
Reviewed in the United States on October 2, 2016
Verified Purchase
This is the next best thing to seeing Hall and Oates perform live. The band members are all so talented and the music is amazing!!
Read more
Helpful
Report abuse

DAVID SERRITOS
5.0 out of 5 stars Five Stars
Reviewed in the United States on September 6, 2016
Verified Purchase
I would like to Order this Item again.
Read more
One person found this helpful
Helpful
Report abuse

Mule
5.0 out of 5 stars Five Stars
Reviewed in the United States on September 22, 2015
Verified Purchase
H&O and their "hired guns" are always worth enjoying.
Read more
Helpful
Report abuse

Amazon Customer
4.0 out of 5 stars Four Stars
Reviewed in the United States on November 6, 2016
Verified Purchase
good concert. Not alot of surprises on this dvd.
Read more
Helpful
Report abuse

Alejandro
1.0 out of 5 stars so sad
Reviewed in the United States on June 10, 2012
Verified Purchase
The video and audio of this product is awful, I guess this a copy from a VHS but c'mon how I just wonder How whith all the thecnology.... el video y audio de este producto es terrible :S
Read more
Helpful
Report abuse
See all reviews

Bad Bear Blues
5.0 out of 5 stars Daryl and John at their rockin' soulful best!
Reviewed in the United Kingdom on June 11, 2015
Verified Purchase
The boys are in town – and don’t they just love it! Daryl and John hit Dublin with a coruscating tour-de-force. Most of the old stuff is there – OK I guess we all have particular favourites - who cares? – this gig is just the canine’s naughty bits!

With a shimmering backing band – just how good are these guys? – including Charlie DeChant on smouldering sax – Daryl and John rip through their rich and plentiful repertoire. Listening to the CD you’ll get the impression that they are just digging Dublin – watching the DVD removes any doubt.

Like some great wine vintage, Daryl’s voice seems to have improved with age. The boys have clearly looked after themselves down the years and they perform here with infectious and mesmerising enthusiasm and love for the music.

The comparison of this live performance vis-à-vis their studio albums is a no-brainer – Hall and Oates seem to be at their best in a live setting. They add a real rock edge to their soul songs – an extra dimension to some classic songs – top-class sound quality – just a great album – especially impressive on a warm summer’s day.

DEVILLE
5.0 out of 5 stars A must- have for each fan of Kylie !
Reviewed in the United Kingdom on July 28, 2011
Verified Purchase
The whole concert shows an amazing and energetic Kylie MINOGUE, very enthusiastic. She dances a lot during this older concert and sings in live, as always " Love Train " shall be pointed out as a rarity among others. Each fan of kylie must own this fabulous DVD. I highly recommend it !
Read more
10 people found this helpful
Report abuse

JimmyB
5.0 out of 5 stars Five Stars
Reviewed in the United Kingdom on April 5, 2017
Verified Purchase
Good live album if you like H&O.......
Read more
Report abuse

Sam Ellis
5.0 out of 5 stars Five Stars
Reviewed in the United Kingdom on April 29, 2017
Verified Purchase
A cd which showcases the range, quality and vocal arrangement of Hall and Oates.
Read more
Report abuse
See all reviews

Page 1 of 1 Start overPage 1 of 1
Previous page
Next page
Pages with related products. See and discover other items: daryl hall and john oates
Back to top
Get to Know Us
Make Money with Us
Amazon Payment Products
Let Us Help You
EnglishChoose a language for shopping. United StatesChoose a country/region for shopping.
© 1996-2021, Amazon.com, Inc. or its affiliates