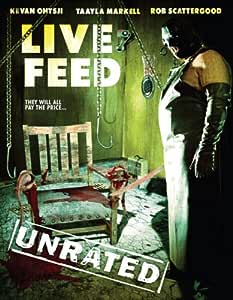 3.5 out of 5 stars
3.5 out of 5
27 global ratings
How are ratings calculated?
To calculate the overall star rating and percentage breakdown by star, we don’t use a simple average. Instead, our system considers things like how recent a review is and if the reviewer bought the item on Amazon. It also analyzes reviews to verify trustworthiness.
Top reviews

Joseph McGuinness (Ray Ray's Records)
1.0 out of 5 stars Yawnfest
Reviewed in the United States on October 31, 2019
Verified Purchase
Gawd this is boring. Its not the directors fault. Sort of hostel meets tales from the crypt with just the worst acting ive seen in a long time. Bad writing (idiotic and dull). Boring. Fake gore. The blonde who gets tied up has cute boobs. Whoopie.
Read more
Helpful
Comment Report abuse

Andre Villemaire
3.0 out of 5 stars You want violence and Gore...well here it its........
Reviewed in the United States on March 20, 2007
Verified Purchase
Im not too crazy about these types of movies, but i did enjoy Hostel for
what it was...like a comic book. But this film, is surely different.
It mixes film and video..giving it a unequal look, it gives you gore +
violence ..in a kind of sadistic way.
These days, almost everthing goes....and the filmmakers know it.
Good for a viewing or two.

Dan
1.0 out of 5 stars JUNK!
Reviewed in the United States on September 26, 2008
Verified Purchase
I can't beleive that there are people giving this movie more than a star! It was difficult to watch, not because of the violence but because it was just that boring! Have you ever finished watching a movie and then thought to yourself... "Self, are we now a dumber person for watching this movie???" This film was absolute garbage. If your expecting something similar to Hostel, you will be extremely disapointed.
Read more
3 people found this helpful
Helpful
Comment Report abuse

Explorator
3.0 out of 5 stars SICK BUT WELL DONE 'SAW' & 'HOSTEL' STYLE MOVIE!
Reviewed in the United States on December 13, 2009
Live Feed is one REALLY NASTY movie. You know what you're getting into when you see the cover and as far as torturous horror goes this movie definitely delivers the goods (or the 'bads' depending on your point of view). Intended solely for the 'Saw' and 'Hostel' crowd it is VERY brutal! Pornographic Images of bound & gagged women cover the walls of the sleazy hotel in a menacing foreshadowing of what awaits the 'heroines'. The suspense leading up to the kills could have been dragged out longer to better effect but they seemed like they were in a hurry to get to the VERY nasty parts! The kills are quite bloody and some are actually creative (especially the one involving a poisonous snake and a glass tube) but there are no single standout moments that will likely linger in one's memory. Still, it is so well shot, edited and performed that it's hard to fault it for the subject matter alone. The butcher is a dreadful character who is as cold as they come and there are several other unsavory creeps slinking around the place that were very effective in their roles as well. The victims are the usual batch of idiots waiting to fall prey to the evil. A couple of them are obnoxious but not as bad as some horror movie victims. The only weak link in the movie's 'chain' is the dialog. At times characters say the stupidest things that nobody would say in their situations! Sometimes it is clearly intended as camp but other times it seems like wannabe 'cool' lines falling flat. This provides the window of opportunity which many haters' reviews are exploiting. However, if you've watched as many horror movies as I have you get used to bad dialog and don't allow it to taint your view of a movie in its entirety. The movie makers were obviously having fun with such grim subject matter without ruining the serious tone overall. Live Feed is mean, nasty and has a misogynistic streak for sure but if you're looking for a solid 'Hostel' fix you can do much worse than 'Live Feed'.
Read more
6 people found this helpful
Helpful
Comment Report abuse

You know the drill: five friends on a vacation get into serious trouble by being in the wrong place at the wrong time. There's Mike (Lee Tichon, from the upcoming Rock flick The Tooth Fairy), the boneheaded jock type, and his girlfriend Sarah (Ashley Schappert), who used to be the girlfriend of the somewhat more studious, if equally clueless, Darren (Rob Scattergood), who is now engaged to Emily (Romeo Must Die's Taayla Markell). Also along for the trip is Sarah's best friend Linda (Caroline Chojnacki). One night, the five of them stop in a karaoke bar for a few drunken games of pool, and Mike spills his drink on a triad boss (Stephen Chang, whom you've seen in a number of small roles over the years), and are only saved from imminent destruction by the intercession of a friendly chap named Miles (The Butterfly Effect's Kevan Ohtsji). Unfortunately, the five of them are booked into a hotel owned by the triad...

mike price
5.0 out of 5 stars Five Stars
Reviewed in Canada on June 1, 2018
Verified Purchase
Love this movie. And was delivered on time
Read more
Report abuse
See all reviews