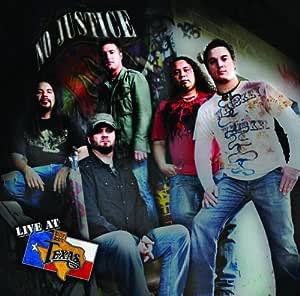 No Justice Format: Audio CD
3.9 out of 5 stars 8 ratings
See all 7 formats and editions Hide other formats and editions
Includes FREE MP3 version of this album.&nbspProvided by Amazon Digital Services LLC. Terms and Conditions. Does not apply to gift orders.&nbspComplete your purchase to save the MP3 version to your music library.
Available at a lower price from other sellers that may not offer free Prime shipping.

In 2007, the band welcomed newcomer Joey Trevino on bass, adding to the existing members: Rice on lead vocals/acoustic guitar, Brandon Jackson on vocals/rhythm guitar, Jerry Payne on lead guitar and Lopez on drums. In addition to a rigorous touring schedule, the band s self-titled 2006 release with Smith Music Group helped catapult them to the forefront of the Texas/Red Dirt music scene. NO JUSTICE recently celebrated their first No. 1 hit with Never Come Back which fought its way to the No. 1 position on the Texas Music Chart and stayed there for an unprecedented six consecutive weeks. On May 5, 2007 the band recorded their Live at Billy Bob s Texas CD/DVD in an unforgettable night at the world-famous Billy Bob s Texas in the Historic Ft. Worth Stockyards. The CD/DVD, which was released on September 4, 2007, captures the band s raw energy and features 11 tracks total, including Never Come Back Red Dress, Bend But Don't Break and The Toast. Capping off the performance are new twists on covers of Ryan Adams Shakedown on 9th Street and Todd Snider's Horseshoe Lake. The recording is the latest installment in the highly-acclaimed Live at Billy Bob's Texas series, which features over 35 recordings from country artists such as Willie Nelson, Merle Haggard, Cross Canadian Ragweed, Jack Ingram, Pat Green, Stoney LaRue and many more. Always in excellent company, NO JUSTICE has shared stages across the greater Midwest with artists such as Dierks Bentley, Charlie Robison, Billy Joe Shaver, Cross Canadian Ragweed, Willie Nelson, Reckless Kelly, David Allen Coe, Pat Green, Cory Morrow, Jack Ingram, Cooder Graw, Gary Allan, Hank Jr., the Warren Brothers, Jason Boland and the Stragglers, and Chris LeDoux.

3.9 out of 5 stars
3.9 out of 5
8 global ratings
How are ratings calculated?
To calculate the overall star rating and percentage breakdown by star, we don’t use a simple average. Instead, our system considers things like how recent a review is and if the reviewer bought the item on Amazon. It also analyzes reviews to verify trustworthiness.
Top reviews

Ich Bin Ein New Berliner
4.0 out of 5 stars Live or mostly live
Reviewed in the United States on October 13, 2007
Verified Purchase
I purchased this product with anticipation to see how No Justice does in concert. Well, if you listen to the audio cd rather than watch the DVD you will enjoy the music. They came across well on the cd with great vocal and good instrumentals backed by a great drummer. Their stage presence wasn't much but didn't hurt their musical performance. (Reckless Kelly or Cross Canadian Railroad on stage they aren't.) The songs are a great cross section of their music released to date with a couple new to me numbers. The DVD is a whole different story! The sound quality is excellent but the video leaves much to be desired towards the end. In about the middle of the performance the DVD freezes for a couple seconds then picks up again with the video out of sync with the music. Really weird!
Read more
2 people found this helpful
Helpful
Comment Report abuse

Idaho Family
5.0 out of 5 stars Just buy it, you won't be disappointed.
Reviewed in the United States on July 26, 2019
Verified Purchase
This is a must have!
Read more
Helpful
Comment Report abuse

Stephen Kana
2.0 out of 5 stars CD skips
Reviewed in the United States on October 13, 2013
Verified Purchase
This is second CD of same title that I received which skips upon receiving. Neither CD is playable. Both are useless. Wasted my money. I love the CD but physical condition - you are warned.
Read more
Helpful
Comment Report abuse

David McDonald
4.0 out of 5 stars Way cool
Reviewed in the United States on April 3, 2013
Verified Purchase
I've seen these guys and this is a great compilation of their live songs. Very good Red Dirt music! Get it
Read more
Helpful
Comment Report abuse

billy b damned
4.0 out of 5 stars Good but not great.
Reviewed in the United States on February 8, 2015
Didn't know these guys so took a punt on this as there is a lack of new releases on DVD at present. Yeah, pretty good. This was done on a pretty low budget, as sound is just stereo, picture quality is not great and the editing leaves a bit to be desired but none of which is bad enough to stop me enjoying the gig. These guys aren't quite in the same league as Micky and the Motor Cars or Reckless Kelly, but they're not that far behind. all in all Ok and better than I expected.
Read more
Helpful
Comment Report abuse
See all reviews