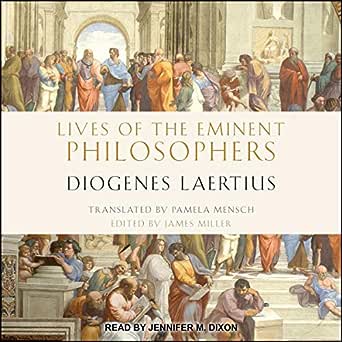 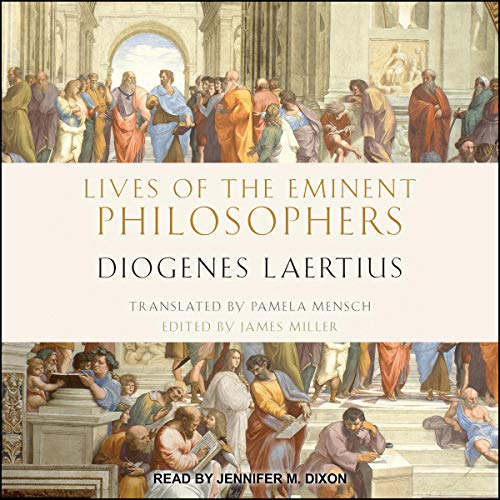 Lives of the Eminent Philosophers

CharlieBooksNYC
5.0 out of 5 stars Lives of the Eminent Philosophers: by Diogenes Laertius
Reviewed in the United States on January 6, 2020
Verified Purchase
ONE OF THE BEST BOOKS I HAVE EVER READ!!! SHOULD BE REQUIRED READING FOR ANY CIVILIZED PERSON, ANYWHERE AND ANYTIME. CLOSE THE PHONES, CLOSE THE TV AND COMPUTER GAMES -- READ!!!!
Read more
4 people found this helpful
Helpful
Comment Report abuse

Robert P. Neuman is a retired college professor and management consultant
5.0 out of 5 stars Don't Urinate Facing the Sun
Reviewed in the United States on May 10, 2018
This is an astounding new edition of the ancient and gossipy catalog of Greek philosophers. It offers an excellent translation with explanatory footnotes (at the foot of the page!); many illustrations ancient and modern of the philosophers; a series of recent scholarly essays; an exhaustive bibliography, and a useful map of the eastern Mediterranean. This is a book that students of the Greek philosophers will probably want to take in digestible doses rather than reading it through, given its 700 pages. Where else could you read that Chyrsippus (280-207 BC) died as a result of a laughing fit after "an ass had eaten his figs?" (382) Or the advice of Pythagoras (ca 530 BC) not to "urinate facing the sun." (402) This is a very readable and weighty (in every sense) tome. Who says philosophy can't be fun?
Read more
38 people found this helpful
Helpful
Comment Report abuse

Barry Crawford
5.0 out of 5 stars This is the definitive English translation
Reviewed in the United States on September 15, 2018
Verified Purchase
Outstanding!
Read more
One person found this helpful
Helpful
Comment Report abuse

Aran Joseph CanesTop Contributor: Philosophy
TOP 500 REVIEWERVINE VOICE
5.0 out of 5 stars The Phenomena of Greek Philosophy
Reviewed in the United States on December 27, 2018
It’s impossible to name all of the sources of the Western tradition. One could include, among others, the Sumerians, the Egyptians, the Hebrews, Christianity, Imperial Rome and Islam. And that doesn’t even begin to name the sources of the equally relevant non-Western cultures such as the Vedas, the writings of Confucius and the sayings of the Buddha.

But it still must be admitted that the history of humankind would have been far different if not for the intellectual tradition begun in Greece some twenty-five hundred years ago known as philosophy. These men (and a few women) consciously strove to understand the world around them using reason instead of mythology as a guide. And scholars today are still debating fundamental questions such as why the movement started, who agreed or disagreed with whom and what did such and such a thinker really mean to say.

What’s remarkable is that we have an ancient source who tried to describe this very phenomena. Diogenes Laertius, around 150 A.D., wrote an encyclopedic account of the history of the different schools of Greek philosophy. He was, to be honest, not the most astute philosopher himself. He continually simplifies philosophies, wrongly assesses various philosophers’ importance and relates unbelievable anecdotes.

But the ability to have an ancient source to guide one’s study of the history of philosophy is indispensable. In fact, in one way Diogenes is indeed modern. He tends to view biography and philosophy as all of one piece. He saw in a way that later academic philosophers did not that thought cannot be separated from the person.

Of course, these philosophical ideas, for the most part, have been replaced by modern science. If you want to know about the universe you are better off reading Stephen Hawking than Empedocles.

But for those who are interested in the history of ideas this edition makes Diogenes accessible to the non-specialist. The ample footnotes and critical essays enable the non-classicist to understand the text. And the artwork spread throughout the book allows one to appreciate how Diogenes has been understood throughout the ages.

Again, this isn’t a book for everybody. One has to want to better understand the phenomena of Ancient Greek philosophy. But if this is to one’s taste than the Lives is a real treasure. I can imagine going back to it for years to come.

MLClifford
5.0 out of 5 stars An Intellectual and Visual Treat
Reviewed in the United States on March 20, 2019
A wonderful new translation of a long-neglected classic, complemented with stunning visuals and thought-provoking scholarly essays.
Read more
One person found this helpful
Helpful
Comment Report abuse
See all reviews

Richard Davies
1.0 out of 5 stars Not the new English translation, but a repackaging of Hicks
Reviewed in Italy on June 23, 2019
Verified Purchase
I am as much of an idiot as Diogenes was to have taken this to be the Englishing of Dorandi's edition, which was reviewed in TLS in April or so by Dmitri Levitin. As it is, it is nothing but the old Loeb, still with endnotes and ineptly laid out on the page. I opened it, saw what it was and, with a sigh, put it on the shelf under 'D' (perhaps for 'dunce').
Read more
Report abuse