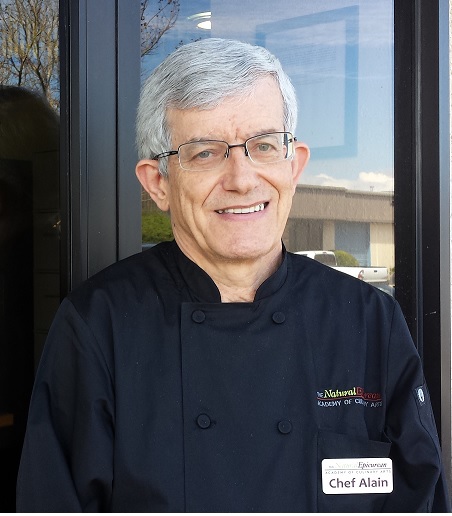 by Chef Alain Braux (Author)
3.3 out of 5 stars 36 ratings
See all formats and editions
Sorry, there was a problem loading this page. Try again.

Chef Braux demonstrates a vast knowledge of the gluten-free, casein-free diet, bringing together in one book not only how and why this diet works for both individuals on the Autism spectrum and for those diagnosed with Celiac disease, but also recipes, resources, and a concise shopping list. I highly recommend this book to anyone that would like to improve their health with the GFCF diet. Kecia Johndrow. Vice President. National Autism Association of Central Texas Chef Alain Braux has done it again! This book will take you on a sweet escape: an escape to gluten and dairy-free heaven! His recipes, witty writing and clever tips will help you make a stress-free transition to the gluten and dairy-free lifestyle. This book is full of easy-to-read educational materials and resources to help you feel better. Whether you are newly diagnosed or have been gluten-free for 30 years, you will find yourself referring this book time and time again. Jessica Meyer, Owner and Chef of ATX Gluten-Free
Read more
Previous page
Next page

With 40 years of experience in the food industry as a chef and 10 years as a nutritherapist, Chef Braux is the Executive Chef at People?s Pharmacy where he focuses on the creation of gluten/dairy-free and low-sugar dishes for clients with specific conditions such as Celiac disease, ADD/ADHD, and assorted food allergies.

Recently diagnosed with gluten intolerance, Chef Braux wanted to share his knowledge as a nutritherapist and experience as chef to help other people to deal with this modern affliction. He helps you understand what is gluten intolerance and Celiac disease; explains how a gluten and dairy-free diet could positively affect a child with autistic spectrum disorder; offers lists of organizations and groups able to help you with celiac disease and autism; gives you an extensive listing of hidden sources of gluten and dairy additives and a complete shopping list of gluten and dairy-free products. To finish it all, Chef Braux offers you more than 80 GFCF recipes to help you get started on your way to a healthier life.

Chef Braux is also the owner of A Votre Santé, a small business offering personalized diet plans for people with assorted conditions such as cancer, Celiac disease, gluten and dairy-free allergies, diabetic clients, ADD/ADHD children, and clients with assorted food allergies. He also lectures on the foundation of good health through appropriate nutrition; he teaches hands-on classes on how to prepare gluten-free/dairy-free baked goods and desserts and has cooking classes based on this book.

Bonjour! My name is Alain Braux. I am a French chef and nutrition therapist.

So far, I have published 7 print books and 10 ebook on the connection between food and health. I do sincerely believe that, with the right choices and when handled properly, food can be medicine. And while you're at it, why not enjoy yourself by eating wonderful and tasty recipes?

About 15 years ago, after fattening my customers with my fine French pastries, I became more and more intrigued by the effect on food on one's health. That lead me to study the macrobiotic philosophy of eating and became a macrobiotic counselor and then a B.S in Holistic Nutrition. I am working with a private clientele afflicted with specific food challenges such as gluten and dairy allergies, Celiac disease, children with ADD/ADHD and many more. For more information, please see: www.alainbraux.com.

So far, my books have garnered a series of book awards:

- Finalist in the Cookbook - Regional category at the 2013 International Books Awards.

- Earned an Honorable mention at the 2011 New York Book Festival

How to Lower your Cholesterol with French Gourmet Food won:

- Earned an Honorable Mention at the 2009 DIY Book Festival

- Earned an Honorable Mention at the 2010 San Francisco Book Festival

- Was a Finalist at the 2010 National Indie Excellence Book Festival

- Earned an Honorable Mention at the 2010 New York Book Festival

As a Nutritherapist - someone that uses food as a healing medium - I strongly believe that given the right diet, our body can prevent most of our modern degenerative diseases and I try my best to help people affected with these diseases to regain a normal life.

As a French chef, I also firmly believe that eating healthy food does not mean eating bad-tasting food. I make a point to provide my clients with a diet that they can only eat but also enjoy eating. What's the point of trying to get better with food you do not want to eat. Have you tried to eat hospital food lately? How do they expect you to feel better with those barely defrosted limp bland vegetables, overcooked unknown meat and mint Jello. In my opinion, sick people need to eat fresh and great-tasting food loaded with vitamins, minerals and natural phytochemicals provided by nature.

I sincerely hope my books will help you live a healthier and happier life without the help of potentially harmful drugs, the exact same way I did. Merci for trusting me with your health.

A Votre Sante. To Your Health

Chef Alain Braux's book, Living Gluten and Dairy Free with French Gourmet Food, is more than just a cookbook. Its an in-depth self-help guide for anyone new to the gluten-free, dairy-free diet. Braux helps you analyze your symptoms to see if you are gluten sensitive, walks you through finding the right doctor, talking to your doctor, what tests you should have done, and the healing process. He tells you how to set up your gluten-free, dairy-free kitchen, how to navigate shopping and eating out, all the places that gluten can lurk, and he gives you a Master Shopping List. He even touches on a bit of psychology in the section: How to Handle Your GFCF Social Life!

Then, before indoctrinating you on the basics of gluten-free baking, he sends you on to the recipes. While Braux has gone on to write a cookbook on Paleo French cooking after this one, if you're still phasing grains out of your life, he provides you with some gluten-free alternatives to his favorite French breads and pastries.

My favorite recipes are those that are naturally gluten- and dairy-free, and full of that delicious (yet simple!) French gusto. These include Gazpacho, Ratatouille, Tuna Nicoise Salad, Pork Stew with Capers, and Spinach with Raisins and Pine Nuts, to name a few.

What I like the most about the book is how Braux's spark of personality shines through the pages. Sprinkled with humor, sensitivity, and encouragement, you feel like you have more than just a handy book by your side. You have a friend, too.
Read more
3 people found this helpful
Helpful
Report abuse

Penny
2.0 out of 5 stars Recipes are TOO HARD to do, especially if you are not well, and I am an excellent cook. This is definitely a chief's idea.
Reviewed in the United States 🇺🇸 on July 13, 2013
Verified Purchase
His food/packaged recommendations vacillate too much, i.e., some have dairy, some have wheat. I wanted to scream, MAKE UP YOUR MIND. The book is for dairy and gluten-free help, but doesn't help me. Really very few products he names are in my neck of the woods (Los Angeles) and can't rely on them because just like any label in the store, gotta read every word in the book, because if you are dairy AND gluten-intolerant the majority of the products are no better described than the product's label. Do not recommend if you are a Celiac and/or dairy intolerant.
Read more
4 people found this helpful
Helpful
Report abuse

Bruce A. Tate
5.0 out of 5 stars GFCF and French Gourmet Food!!
Reviewed in the United States 🇺🇸 on October 14, 2010
Verified Purchase
(I am actually Bruce Tate's wife, Maggie, using his Amazon account! Yes, he knows!) This book contains a lot of information I didn't know like antacids can have gluten - really? I couldn't believe it! Nearly the first half of Living Gluten and Dairy Free with French Gourmet Food is full of practical and necessary information for anyone facing the GFCF dietary challenge. The lists of food/additives with hidden gluten is extensive and the master shopping list will help anyone needing guidance about stocking a GFCF pantry. The second half is full of some of the best GFCF recipes I have seen in the two years I have been eating gluten free. I can't wait to try the Cranberry Walnut Scones (this weekend!)and the desserts look to die for. I have eaten the Raspberry Souffle and it's a delight and I am very glad to have the recipe. I show my culinary bias by raving about the sweet treats but there are amazing GFCF recipes for appetizers, soups, salads, and main dishes as well. I have waited for this book for a year and I am so glad it's finally in print! --mt
Read more
11 people found this helpful
Helpful
Report abuse

E. Chandler
1.0 out of 5 stars Not worth the $$$$
Reviewed in the United States 🇺🇸 on February 18, 2018
Verified Purchase
Deeply disappointed in this book having been gluten free for 30 years and training chefs internationally I was hoping for more actual information on French cooking. Not worth buying offered little information or classic recipes adjustable for gluten free!
Read more
One person found this helpful
Helpful
Report abuse

Michele Whiteaker
5.0 out of 5 stars Great help and very good recipes
Reviewed in the United States 🇺🇸 on June 10, 2011
Verified Purchase
This book is a must-have !
I love it because as i am gluten-intolerant it is very useful for my kitchen - the recipes are simple but very tasty !
You can even ask your own question to the writter and if you speak french it will be a must.
Read more
One person found this helpful
Helpful
Report abuse

Thomas J. Munn
2.0 out of 5 stars Lots of info NO TOC!
Reviewed in the United States 🇺🇸 on December 19, 2011
I borrowed this on my kindle, and there is NO TOC! I have to wade through pages and pages of info (which looked very good) and couldn't get to the recipes easily.

You might want to republish with NAV points. They are ESSENTIAL for a good ebook. Terrible formatting. Its more of a 'list' than a cook book.

If you are looking for a cookbook, this is NOT it. Its more of a 'how to live with gluten allergy'. With loads and loads of lists and info.
Read more
3 people found this helpful
Helpful
Report abuse
See all reviews