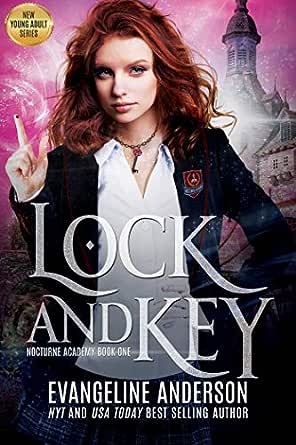 You've subscribed to Nocturne Academy! We will preorder your items within 24 hours of when they become available. When new books are released, we'll charge your default payment method for the lowest price available during the pre-order period.
Update your device or payment method, cancel individual pre-orders or your subscription at
Your Memberships & Subscriptions
There was an error. We were unable to process your subscription due to an error. Please refresh and try again. 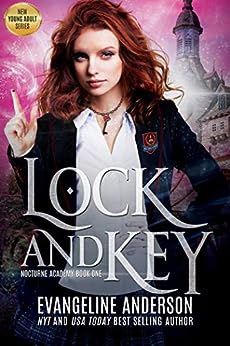 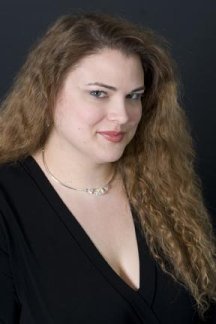 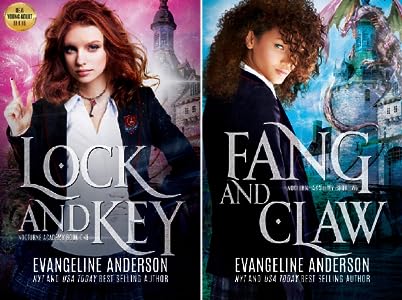 4.8 out of 5 stars
4.8 out of 5
89 global ratings
How are ratings calculated?
To calculate the overall star rating and percentage breakdown by star, we don’t use a simple average. Instead, our system considers things like how recent a review is and if the reviewer bought the item on Amazon. It also analyzes reviews to verify trustworthiness.
Top reviews

Tcchunk33
5.0 out of 5 stars A sneak peak to something good
Reviewed in the United States on February 1, 2020
Verified Purchase
Halfway through this book I checked to see if book two was available. I was that excited to continue reading the story. Sadly no, I will have to wait a bit. I loved this magical romance story so much. I have read by the author before, I liked the books, but this book I LOVED. The magical world she created is so unique and interesting to read about. We had a cool heroine that did not exist just to get saved. She was complicated, strong and had amazing chemistry with her male lead. The side characters were all different and entertaining. I can't wait to read more about them too. I feel the author with this novel set the stage for a whole lot of complication in later books. I can't wait to read the drama, the action and of course, the romance. LOVED LOVED LOVED. Really, take a chance and try it out!
Read more
3 people found this helpful
Helpful
Comment Report abuse

Rhonda Jones
5.0 out of 5 stars Awesome Book!
Reviewed in the United States on January 29, 2020
Verified Purchase
I loved this story and I loved the characters. Something is going on at the Nocturne Academy. A school for mostly paranormals, and less than a handful of normal humans (Norms) and a select few non-magical children of witches (Nulls). Four young teens branded in the Norm, Null, or Gay category have banded together to provide friendship and support to one another. They are treated like sub-par people, housed in the dungeon, fed leftovers from the paranormal food offerings, and kept separate from the Others. Little do the four teens know, but they will fight evil and injustice, and accomplish great things. Book 1 was fantastic! I cannot wait for the next in series.
Read more
3 people found this helpful
Helpful
Comment Report abuse

Fatesdestini
5.0 out of 5 stars Evangeline Anderson's first foray into YA
Reviewed in the United States on February 10, 2020
Verified Purchase
Evangeline Anderson has always been a favorite of mine but when she said she was going to try writing YA...I wondered if I would like it...Well the answer is....YES!!!! I immediately fell in love with Megan and her coven of Norms."nonmagicals". Then I was introduced to Griffin the Nocturne teen who was being punished for such severe crimes that everyone in school avoided him like a plague. I read YA a lot but I honestly can say this a very fresh and new take on the Magical school/ forbidden love genre. I can NOT wait to read the next in. Series! I highly recommend you give it a chance even if YA isnt normally your cup of tea.
Thanks! 😊💜

D.Maglioli
5.0 out of 5 stars Lock and Key
Reviewed in the United States on February 7, 2020
Verified Purchase
Exciting tale of forbidden love, betrayal, secrets and friendships. Megan is brought to Nocturne Academy, not knowing she comes from a very strong witch family, in order to learn witch crafting. Then she meets Griffin who is the last unmated nocturne, and their mutual attraction escalates, which is forbidden by the Edict. Things begin to get out of hand when the beginnings of a long ago prophecy start to come true. It needs to be stopped but how far will the one who wants it stopped go? I loved it.
Read more
3 people found this helpful
Helpful
Comment Report abuse

Allecia
5.0 out of 5 stars Fantastic YA Book with a wonderful fresh, new "world" to explore!
Reviewed in the United States on February 7, 2020
Verified Purchase
Evangeline has done it again! This book was incredible! I loved her take on magic! It took me hours and hours to read and absorb (which is unusual as typically I can read one of her books in a day or two). It was long and involved and just beautiful. The characters in the coven were alive and well developed and fun (and tragic!) and really absorbed me. This book was SO SO SO GOOD! While I admit I am a gigantic Evangeline fan, I wasn't sure what to expect from a YA novel, and I was absolutely blown away. The story was well done, the characters likeable and the world we are drawn into is super interesting. I cannot wait for the second one!
Read more
2 people found this helpful
Helpful
Comment Report abuse

Kindle Customer
5.0 out of 5 stars WOOHOO!! What a ride!!
Reviewed in the United States on February 12, 2020
Verified Purchase
AWESOME new YA series start!! I didn't think you could wrap it up, but I was wrong!! Megan and Griffin may have blown the Edict to shreds and trouble will come, but GREAT friends like Kaitlyn, Emma and Avery will be able to help them through!! Not to mention the budding romance between Ari, his dragon and Katydid... BRING ON BOOK 2!!!!
Read more
2 people found this helpful
Helpful
Comment Report abuse

Kindle Customer
VINE VOICE
5.0 out of 5 stars It's a keeper
Reviewed in the United States on January 26, 2020
Verified Purchase
I tried this out via Kindle Unlimited. By chapter 5 I was sure it was a keeper and went back and bought it. I was not disappointed. Now eagerly waiting book 2 Fang and Claw...
Read more
2 people found this helpful
Helpful
Comment Report abuse

Lynette
5.0 out of 5 stars fast paced & addicting
Reviewed in the United States on March 1, 2020
Verified Purchase
this story grabs you from the beginning & doesn't let go. i only ment to read a few chapters, but couldn't let go. be prepared to lose sleep if you start this before bed! must get the next story to find out what happens to Kaitlyn & Ari, also because i want more of this world. so detailed & logical, yet surprising too. enjoy, you wont be disappointed.
Read more
One person found this helpful
Helpful
Comment Report abuse
See all reviews

bernadette
5.0 out of 5 stars Amazing
Reviewed in the United Kingdom on April 8, 2020
Verified Purchase
Love it book preorder the next one read that as soon as it was available. Also ordered paperback as great series.
Read more
Report abuse

clare burns
5.0 out of 5 stars Great new twist on an old fave genre
Reviewed in Australia on March 22, 2020
Verified Purchase
WOW, I love Evangeline's books (who doesn't love a kindred) but I wasn't sure how I'd feel about a YA with no sexy times. IT WAS BRILLIANT!!! It's kinda Harry Potter meets Twilight with a twist. Megan & Griffin are so wonderful together, the draw and the wait for their connection was deliciously torturous. I love the cast of characters than make up the Norm Dorm Coven, you just know there's more than meets the eye there. From a writer who gives me great heat, she now also gives great YA appropriate love.
Read more
Report abuse

Paula Pike
4.0 out of 5 stars Great!
Reviewed in Canada on February 9, 2020
Verified Purchase
While I did enjoy this book, I must say that I considered stopping this book early on.. I felt it had a very slow start, but once it kicked in, it was very good. Only my familiarity with this author stopped me. So glad I didn’t give it up! Can’t wait for the next.
Read more
One person found this helpful
Report abuse

Sandee L
4.0 out of 5 stars Prophecy-style young adult book
Reviewed in Canada on March 5, 2020
Verified Purchase
This is fun and interesting prophecy style young adult book. Witches, Vampires, Shifters, Fae and Normals make up the members of the Nocturne Academy. A wonderful mixture of past tragedy and new challenges provide opportunities for the young characters to learn, grow and achieve success. I enjoyed it very much.
Read more
Report abuse

BethAngelica
5.0 out of 5 stars Evangaline’s Latest Series
Reviewed in Australia on January 19, 2020
Verified Purchase
I thoroughly enjoyed this story, from start to finish.
Although a YA story, I’m sure it will appeal to all ages.
Yes, a “Witch goes to Witch school” book, but one with a different twist, to what you’re expecting.
I’m awaiting book 2 with anticipation.
Read more
Report abuse
See all reviews