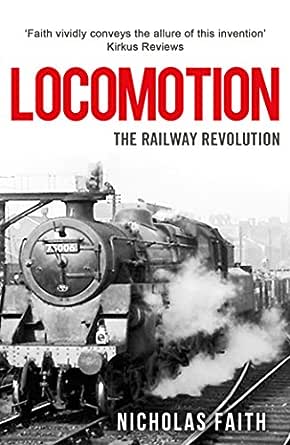 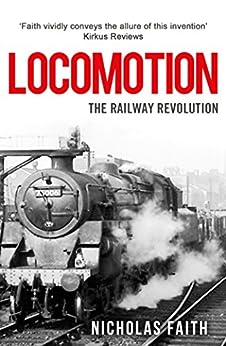 4.5 out of 5 stars
4.5 out of 5
5 customer ratings
How does Amazon calculate star ratings?
Amazon calculates a product’s star ratings based on a machine learned model instead of a raw data average. The model takes into account factors including the age of a rating, whether the ratings are from verified purchasers, and factors that establish reviewer trustworthiness.
Top Reviews

At the time of writing the Snow series is available on DVD but only one episode of the original ‘Locomotion’ series (‘The War Machines’) has been uploaded to YouTube. This doesn’t really matter, insofar as Faith’s book exists in its own right. It covers the same ground as the original TV series to which it was attached but is obviously not shaped as that was by the available archive film footage, although it is worth noting, when considering the visual, that the original volume contained many illustrations, whereas in its present incarnation ‘Locomotion’ consists solely of the unadorned text.

“In studying the 19th century, one thing will be clear: that the growth of technology - telegraph, cheap newspapers, railways, transport - is matched by a failure of imagination ... a fatal inability to understand the meaning and consequences of all these levers, wires and railways, climaxing in 1914 when the German Kaiser is told by his generals that he cannot stop the war he has started because it would spoil the railway timetables.”

Thus speaks the eccentric History master, played by Graham Crowden, in Lindsay Anderson’s ‘If ….’, summarizing A. J. P. Taylor’s argument that railway timetables meant that German mobilization fast tracked Armageddon. This is a classic illustration of the importance of the railways in shaping our world and, as such, is covered by Faith, although he claims that Von Moltke, the Chief of the German General Staff, “could have countermanded the order if he had not been living in the shadow of his uncle’s martial reputation”. I am not convinced, preferring to side with Taylor that to see his thesis so dismissively shunted into a siding.

Not only does Faith’s Bibliography stop in 1993, meaning that it does not refer to books such as ‘The Cambridge History of War’, but it also omits important literature before that date, such as Dennis Showalter’s 1975 ‘Railroads and Rifles: Soldiers, Technology and the Unification of Germany’.

In short, Faith provides the general reader with a handy, readable one-volume history of the development of the railway and its impact on the world economically, socially, militarily and politically, although some will prefer Christian Wolmar's 'Blood, Iron and Gold: How the Railways Transformed the World'.
Read more
2 people found this helpful
Helpful
Comment Report abuse
See all reviews from the United States

Amazon Customer
4.0 out of 5 stars General railway history.
Reviewed in the United Kingdom on May 5, 2018
Verified Purchase
A good read for general history of world wide railways. You would need to refer to other books for more detailed information about particular countries or specific lines.
Read more
Helpful
Sending feedback...
Thank you for your feedback.
Sorry, we failed to record your vote. Please try again
Report abuse

jonathan m glasser
4.0 out of 5 stars B
Reviewed in the United Kingdom on June 23, 2018
Verified Purchase
A
Read more
Helpful
Sending feedback...
Thank you for your feedback.
Sorry, we failed to record your vote. Please try again
Report abuse

b butcher
5.0 out of 5 stars Five Stars
Reviewed in the United Kingdom on September 9, 2015
Verified Purchase
Book in very good condition
Read more
Helpful
Sending feedback...
Thank you for your feedback.
Sorry, we failed to record your vote. Please try again
Report abuse