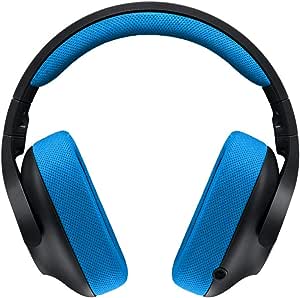 Visit the logitech G Store
3.8 out of 5 stars 96 ratings
| 8 answered questions
In stock.

Take PC Performance With You

PC gamers expect high quality, immersive and explosive audio while playing. But, what about outside the game? G233 is a new breed of gaming headset with all the advanced features you want for gaming—in an unexpectedly lightweight and extremely comfortable design that fits the rest of your life, too.

Combine G233 Prodigy Gaming Headset with a Prodigy Series mouse and keyboard for a complete gaming setup, designed to help you play with new speed and accuracy.

Logitech G233 gaming headset is the immersive gaming audio experience designed for life in and out of the game. Patent-pending Pro-G audio drivers smoothly deliver booming bass and precise highs so you hear the game, the music, the movie ... as intended.

3.8 out of 5 stars
3.8 out of 5
96 global ratings
How are ratings calculated?
To calculate the overall star rating and percentage breakdown by star, we don’t use a simple average. Instead, our system considers things like how recent a review is and if the reviewer bought the item on Amazon. It also analyzes reviews to verify trustworthiness.

Brandon Sims
5.0 out of 5 stars Great headset with a ton of uses (e, Logitech vs Plantronic, user panel software, etc)
Reviewed in the United States on October 24, 2019
Verified Purchase
I must say most of the bad reviews on this tend to be from those that don't understand that there are key differences between digital and analog products. This headset is capable of some digital performance, but it's more suitable for analog uses. This works great in my phone, in my Xbox controllers, and when plugged directly into the 3.5 mm jack on my computer for things like Google Voice and Skype, etc when used with the standard Microsoft audio drivers. When using the USB adapter, it will work depending on how your computer is set up (if you have Windows 10 Pro, all of the legacy drivers will let this work just fine through usb), but if you're running a lesser version of Windows 10, some of those drivers may not automatically install or initiate.

As far as the build quality, the only time I've had any Logitech headsets fall apart is while moving, a cord came out of a box and was stepped on and it damaged the internal wires, and once when I fell asleep with as set on while leaned up against a wall. Otherwise, I'm careful to not drop them or sit on them or anything like that and I tend to get at least 5 years out of a set before having any issues.

Logitech VS Plantronic (Working from Home)
If you work from home, like me, this set might not work so well for you as most home work environments utilize more digital technology (especially in virtual desktops) and may not recognize a 3.5 mm jack input, even if you use the usb adapter. That being said, if you work from home, I still wouldn't recommend the Plantronic headsets. I use my Logitech G430's with the USB adapter or my G35 (old, I know). I have tried nearly all of the Plantronic models, and while they make amazing bases, I ended up having to return all of their headsets. They really are made for productivity and not comfort; they're the cheapest things you can buy that work, but for a few bucks more, you'll get a lot more use out of a bottom of the line Logitech model.

The Control Panel (the software)
The drivers will install automatically when you first plug up any Logitech Headset, and if you have Windows 10 Pro (don't know about the lesser versions), it will usually use the standard drivers just fine. If you work from home using a virtual desktop, DO NOT install the additional options software, like the control panels, enhancement software, etc. It will interfere terribly with your work environment causing your audio to randomly cut in and out. Yes, those enhancements do improve the sound quality a lot, but if you work from home, you simply can't have that software on your computer at all as it's just too intrusive for most virtual desktop environments for work. If you don't work from home, though, you're missing out if you don't install that software, so take advantage of it. Yes, it makes that much of a difference with the sound quality.

Overall, when used mostly as an analog headset, this thing is great. When used as more of a digital headset, you just have to tweak the software and drivers to make it work the best for your unit.
Read more
One person found this helpful
Helpful
Report abuse

Doke Scott
2.0 out of 5 stars mic sucks, but comfortable
Reviewed in the United States on May 9, 2020
Verified Purchase
The big problem is the mic is terrible. You can be heard, only if you twist the mic around to be directly in front of your mouth, and speak loudly. But it won't stay there. I've also tried the inline mic option, and it's also horrible. Basically, I would be better off with a tin can and a string than either of these microphone options.

The ear cuffs are comfortable. They're well shaped, don't pinch, and their sound quality is good. If I only wanted to use these to listen to music, I would consider them very acceptable. They don't have any active noise reduction, but they do have good passive noise exclusion, and generally give good quality sound.

There is no excuse for selling a microphone this bad. It should never have passed even preliminary product testing.

Unfortunately, I bought these for online conferencing in meetings and games. They utterly fail in these roles.
Read more
Helpful
Report abuse

foxfire
1.0 out of 5 stars works better than my friends 250 dollar headset
Reviewed in the United States on September 6, 2020
Verified Purchase
as you can clearly read, thats the truth shocking as it maybe the mic works better and the sound is better than his 200+ dollar headset name brand (not allowed to say) so if you want a good mic(detaachable + mic mute) and good sound for a very cheap price try this stuff its good
============

Brayden
4.0 out of 5 stars Good for gaming but that’s it
Reviewed in the United States on October 11, 2020
Verified Purchase
For playing games these were really good. How ever the sound quality is not that great. They are very durable and will last a long time. Iv had mine for 2 years until I broke them out of rage. Mic is bad but it’s ok if you just want them to simply understand you and know who’s voice it is.
Read more
Helpful
Report abuse

ichigorocks
4.0 out of 5 stars Decent
Reviewed in the United States on May 31, 2018
Verified Purchase
Good headphones. Kind of rough on the ears though. Padding isn't as good as I would like.
Read more
3 people found this helpful
Helpful
Report abuse

TPab
3.0 out of 5 stars Alright!
Reviewed in the United States on October 2, 2018
Verified Purchase
Ok! It scratches ur esrs so much the cups literally rub ur skin that leaves it red and the sound quality seems really bad in my opinion idk i didnt really like it at all id say just pay more and get a better headset!
Read more
Helpful
Report abuse

Matthew D. Brown
1.0 out of 5 stars Not recommended to buy
Reviewed in the United States on January 31, 2019
Verified Purchase
I would not recommend this headset at all. The quality of them when I first got them was fine. Then, after around 3 months, the quality of the sound went down and the Mic on it kept cutting out. I had to resort getting a new headset since the Mic quality was bad enough that my friends couldn't hear me clearly. Now I have a corsair void pro headset, and it works very well and are also a lot more comfy to wear.
Read more
One person found this helpful
Helpful
Report abuse

A Strick
1.0 out of 5 stars Bad quality
Reviewed in the United States on March 1, 2020
Verified Purchase
Not a good headset. Send more for a better product
Read more
One person found this helpful
Helpful
Report abuse
See all reviews

No feedback from the mic, so you don't hear yourself speaking in the headset. The sound from the mic is clear and crisp, although it lacks background noise cancelling and/or a puff filter, this is why I am removing a star in sound quality.
Read more
Report abuse

Ashesh Chakma
2.0 out of 5 stars Disappointing product
Reviewed in India on April 3, 2021
Verified Purchase
Poorly built and not at all durable. The splitter to connect microphone and headpone separately got damaged within a month and within a year the earpads started falling off because the plastic that holds it start to beak. Very bad product from Logitech. However sound is good for its price.
Read more
Report abuse

Daniel
4.0 out of 5 stars Really good for the price
Reviewed in Canada on October 23, 2017
Verified Purchase
Really good for the price. The washable warmups is a huge upside. Most gaming headphones don’t come with a removable cable but this does. Although th cables that come with it are cheap so just use my own cables. Mic quality is poor but good enough for team mates to understand you. I how ever don’t use the mic because I have an external one.
Read more
Report abuse

Page 1 of 1 Start overPage 1 of 1
Previous page
Next page
Pages with related products. See and discover other items: logitech headphone, good gaming headset, pc and console gaming headphones, headsets for ps4 and xbox, corsair mic, headsets for nintendo switch
Back to top
Get to Know Us
Make Money with Us
Amazon Payment Products
Let Us Help You
EnglishChoose a language for shopping. United StatesChoose a country/region for shopping.
© 1996-2021, Amazon.com, Inc. or its affiliates