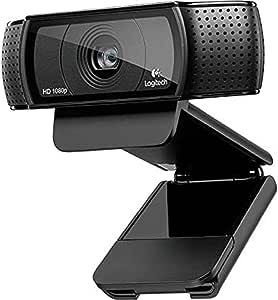 Visit the Logitech Store
4.6 out of 5 stars 758 ratings
Available from these sellers.

Logitech HD Pro Webcam C920. Résolution vidéo maximale: 1920 x 1080 pixels, Format vidéo pris en charge: H.264. Interface: USB 2.0, Couleur: Noir, Longueur de câble: 1,8m. Processeur minimal: 2.4 GHz Intel Core 2 Duo, Mémoire vive (RAM) minimale: 2048 Mo, Systèmes d'exploitation compatibles: Windows XP (SP3), Windows Vista, Windows 7 (32-bit/64-bit). Logiciels fournis: Logitech Vid HD Full HD 1080p video calling on Skype® Your loved ones will see the real you in breathtaking Full HD clarityonly on the C920 and Skype. H.264 video standard You'll enjoy faster, smoother video and better image quality with less demand on your computer thanks to H.264 encodingthe industry standard for HD video. HD 720p video calls You'll get 720p video calling on most major instant messaging services, including Windows Live™ Messenger, and Logitech Vid HD. Full HD 1080p recording You can record in breathtaking, widescreen Full HD 1080p at 30 frames-per-second (fps). Plus, with H.264 encoding, your computer doesn't have to work as hard for you to get great video. One-click to Facebook® You can easily capture HD video (1080p) and upload in no time to Facebook, Twitter™ or YouTube™thanks to H.264, an advanced compression technology. Autofocus The 20-step autofocus is more responsive, more sensitive and more intelligent. So whether your kids won't stop moving or you're trying to capture your latest dance moves, the C920 delivers razor-sharp images (from 10 cm and beyond) for every occasion. Carl Zeiss® optics You'll enjoy razor-sharp images from a lens designed with the help of one of the pioneers in the industry. Natural stereo audio You can be sure your loved ones will hear the real you thanks to dual stereo mics. Stable mounting clip The versatile clip with ru

4.6 out of 5 stars
4.6 out of 5
758 global ratings
How are ratings calculated?
To calculate the overall star rating and percentage breakdown by star, we don’t use a simple average. Instead, our system considers things like how recent a review is and if the reviewer bought the item on Amazon. It also analyzes reviews to verify trustworthiness.
Top reviews

john n.
5.0 out of 5 stars Excellent
Reviewed in the United States on May 9, 2020
Verified Purchase
Product arrived within the window they said it would. I opened the box and plugged it in and it worked as advertised. Excellent product and vendor.
Read more
Helpful
Comment Report abuse
See all reviews

Thinderchild
3.0 out of 5 stars Good product....shame about the software
Reviewed in the United Kingdom on April 11, 2014
Verified Purchase
The cam works well enough out of the box. I have main atop my PC screen and despite Logitechs best efforts to make it adjustable to all, I stiil need Blu-tac to make it fit. The camera is of reasonably good quality but the mic could be better for example it is not as good as a headset even a very average one for skyping but it is easily good enough to be heard and understood and very convenient if you dislike using headsets. The biggest let-down was the lack of software for such a high-end webcam. I suggest you take a look at the Logitech site before purchasing as they seem to have withdrawn a lot of the add-ons which were originally available for this cam.

As usual, I blame Windows 8 for this, as Microsoft appears to have forced everyone else to abandon Windows 7 when they did. And guess what.......Windows 8 does not appear compatible with the older add-on software we used to get. So not only do Logitech get rid of effects etc for W8 users (and who can blame them) but for W7 users also. (!!!!!!!)

Alan
5.0 out of 5 stars Amazing
Reviewed in the United Kingdom on April 3, 2015
Verified Purchase
When planning to produce some online courses, I splashed out on a semi-decent camcorder to do re talking head shots, but I found the messing about popping memory cards out of the cam, and into the PC, them importing the second media into the timeline and syncing it all up (over and over again) a little...cumbersome. Not to mention the real estate a cam tripod (even a small one) takes up your desk.

It was a choice between this and the similarly priced Microsoft one, so I studied the youtube reviews, and this one won out, so I got one.

First thoughts are it's tiny, but beautiful to look at. Despite its size, it still feels really well made. The mount looked a little confusing, but when you put it atop your monitor it becomes obvious how it functions, and works really well. For those who want it, the mount also comes with a standard screw fitting for tripod mounting.

Win 8.1 detected it, and installed the drivers in a minute or so, but I also downloaded the Logitech software from their site to get the tools to to play with resolution and what not. The first thing I noticed was the field of view on this is huge. So much so, that I turned it from 1080, to 720 to avoid recording the whole room. That done, you can then zoom in, pan left and right until you get the perfect head shot...nice.

As this pipes straight into your PC, my screencast software (Camtasia) records the cam simultaneously, so all my sync problems were solved automatically. Problem solved. The recordings appear crisp and clear whatever the lighting conditions, and there is no stutter or judder whatsoever.

The sound is reasonable, but I pipe the audio from a Blue Snowball (which is better).

I know it's pricy, but the quality is great. There is a reason that this is the best selling webcam in the world.
Read more
3 people found this helpful
Report abuse

However, the images that you get are "soft" - i.e. not sharp, compared to the Microsoft Lifecam Studio, which has superior image quality in my opinion, but has no internal codec.

If you have a fast high spec computer and want best image quality, get the Lifecam .
The C920 is over-hyped in my opinion.

Neither the Lifecam nor the Logitech have good audio - best to use an external mic.
Read more
6 people found this helpful
Report abuse

givenny bunning
5.0 out of 5 stars Wonderful webcam, even better than some mobile phone cameras !
Reviewed in the United Kingdom on February 1, 2015
Verified Purchase
I bought this webcam to replace my old logitech one which was broken after many years of loving use. I was not disappointed. The product was slightly over packaged in my opinion and was not the easiest to un-package, however, it was well worth the extra effort.

Pros -
The clarity, crispness and quality of the video feed/photos are incredible.
Stylish design, not too large/bulky.
Tripod screw for attaching it to your favourite tripod.
Beautiful blue LED light to let you know when your webcam is in use by an application.
Great microphone/sound for videos.
Lovely lighting & colour balance - The webcam performs wonderfully in low lighting and spectacularly in good lighting
Fully adjustable settings via Logitech webcam launcher application to ensure you get the exact picture colour etc. that you want.
Very sturdy when on the top of a thin laptop screen due to the grips on the base.
Feels luxurious and premium in regards to quality of materials used to make it and in terms of weight.

Cons -
The "mirrored" setting you would expect to be able to use as per standard with all webcams is only able to be used on certain settings with this webcam. I have not found out entirely why that is yet, however, you can get around that via opening an application such as skype and fiddling with the settings on there once you have your main settings set up to your preferences.

My main uses -
Skyping my family back home and my friends here in the UK, Video diaries, some pictures occasionally.

Conclusion - I highly recommend you try out this webcam, it was worth the money for me. Any down sides it may possibly have are easily worked around so that they are no longer a downside. I am really glad I now own it! - If you are still in doubt after reading reviews, go on youtube and see the video reviews, they helped me to decide alongside online reviews !
Read more
Report abuse

Gazumpa
5.0 out of 5 stars Excellent product
Reviewed in the United Kingdom on March 20, 2014
Verified Purchase
Fed up with my laptop’s pathetic, allegedly ‘HD’ webcam, I decided to give the C920 a go. What a difference! It’s by far and away the clearest webcam I’ve ever used. The images are crystal clear, it responds well to changing light, has a decent dual microphone setup, and feels incredibility sturdy for something so small. On the downside, the autofocus isn’t spectacularly quick, but is more than acceptable. Also, whilst the angle of pitch can be changed, you would need to attach it to a tripod in order to turn it left and right.
Read more
6 people found this helpful
Report abuse
See all reviews

Page 1 of 1 Start overPage 1 of 1
This shopping feature will continue to load items when the Enter key is pressed. In order to navigate out of this carousel please use your heading shortcut key to navigate to the next or previous heading.
Back
Next
Pages with related products. See and discover other items: Webcams