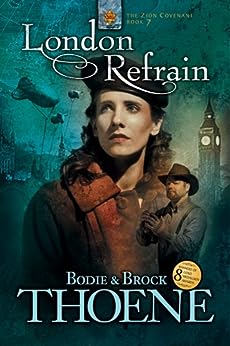 by Bodie Thoene (Author), Brock Thoene (Author) Format: Kindle Edition
Book 7 of 9: Zion Covenant
See all formats and editions
Sorry, there was a problem loading this page. Try again.
England teeters on the brink of war.
It’s no longer a question of if. It’s a matter of when.

In the dark fall of 1939, the hopes of the Polish people fade as Nazi bombers strafe the beloved city of Warsaw. Politicians debate while hundreds stand in lines at the British Embassy, desperate to flee the country before Hitler’s ground forces arrive.

Mac McGrath, a veteran American photographer, recorded the landslide toward war with dedication, believing that if he told the truth, the world would rise up and put a stop to Hitler’s evil plans. Now his foolish idealism embarrasses him.

Outside the embassy gates, Jewish schoolteacher Eva Weitzman prays for a miracle. Without a British passport, she will fall into the Nazis’ clutches.

England teeters on the brink of war.
It's no longer a question of if. It's a matter of when.

In the dark fall of 1939, the hopes of the Polish people fade as Nazi bombers strafe the beloved city of Warsaw. Politicians debate while hundreds stand in lines at the British Embassy, desperate to flee the country before Hitler's ground forces arrive.

Mac McGrath, a veteran American photographer, recorded the landslide toward war with dedication, believing that if he told the truth, the world would rise up and put a stop to Hitler's evil plans. Now his foolish idealism embarrasses him.

Outside the embassy gates, Jewish schoolteacher Eva Weitzman prays for a miracle. Without a British passport, she will fall into the Nazis' clutches.

Who will live and who will die? Will anyone dare to stand against the apathy of nations?

BODIE AND BROCK THOENE (pronounced Tay-nee) have written over 45 works of historical fiction. That these best sellers have sold more than 10 million copies and won eight ECPA Gold Medallion Awards affirms what millions of readers have already discovered-the Thoenes are not only master stylists but experts at capturing readers' minds and hearts. --This text refers to an alternate kindle_edition edition.

R. Dean
4.0 out of 5 stars Need new proofreaders!!!
Reviewed in the United States on August 10, 2020
Verified Purchase
Have read the book before. Fantastic series! First purchased as paperback. Loved it! No problems. But I'm older now so I have decided to buy the series on Kindle to get the larger text. Boy, have I been disappointed!!! Whoever did the proofreading needs to go back to school!!! There are so many wrong words and goof ups!! I paid $7.99 for this?? This book and the previous book were BOTH full of typos!! I may just try reading the paperback I already own and using a magnifying glass!! This is no reflection on Bodie and Brock Thoene. They are magnificent. I just don't understand how Kindle could have dropped the ball so horribly on the proofreading. Very disappointing. Only four stars because of poor proofreading. The book itself deserves FIVE STARS!!!
Read more
3 people found this helpful
Helpful
Report abuse

W. Ruuamau
4.0 out of 5 stars The editor needs a new day job.
Reviewed in the United States on August 7, 2020
Verified Purchase
I would give this book 5 stars but my heavens!!! The editing is absolutely terrible!!! I get totally immersed in the lives of these people and then horrible errors pull me out of this riveting story. Makes me sad that the editing is ruining this book for me. Hopefully I will be able to ignore this soon. I'm in the middle of the book right now
Read more
3 people found this helpful
Helpful
Report abuse

wkmoon
4.0 out of 5 stars Much shorter book than the first 6 Zion Covenants for the same money
Reviewed in the United States on June 18, 2014
Verified Purchase
I have read the first 6 of the Zion Covenant series and really enjoyed them. I have read the reviews and knew that the final three were a combination of another book (that i have not read) with Zion Covenant characters thrown into the mix. Therefore, I do not feel that I bought a book that I have already read, BUT the book is much shorter than the first 6 yet the price is about the same.

London Refrain picks up with the bombing of Warsaw and the eventual fall of Poland to the Nazis. It carries through just a few months of late 1939 where France and England have declared war, but have not begun to actually fight. If you are a Zion Covenant reader, there will be quite a few new characters. It left me hanging and wanting to know what happens next, so I have bought the Paris book already.

For some reason, London Refrain does not seem to be available on Kindle, so I bought the paperback.
Read more
4 people found this helpful
Helpful
Report abuse

G. Wilson
3.0 out of 5 stars This book needs editing.
Reviewed in the United States on July 21, 2017
Verified Purchase
This book desperately needs editing. It is center aligned rather than being left aligned. Sections are separated by the word "dingbat." This is not a reflection of the authors. It is a problem with the scanning. It was not finished. The book is good although shorter than the other six earlier works in this series.
Read more
6 people found this helpful
Helpful
Report abuse

Catherine
5.0 out of 5 stars London Refrain
Reviewed in the United States on September 10, 2012
Verified Purchase
London Refrain is book 7 in the Zion Covenant Series by Bodie and Brock Thoene. This series is a historical fiction about the reign of Adolf Hitler and they weave their own fictional characters in actual historical events throughout the series. The writing keeps me interested and I learn as I read, too. They don't try play down the horrors of what that time was about, but they also give you some hero's to root for weaved inside the story. There with the historical information there is also romance, mystery and of course drama. When I finish one book I can't wait to see what happens to the characters in the next book. Many times I look up the history on line to learn about events mentioned in the book that I didn't learn in a classroom or that I had forgotten. I highly recommend their books not just this series but other book series of theirs as well.
Read more
Helpful
Report abuse

Lynn White
5.0 out of 5 stars Vey engaging
Reviewed in the United States on December 1, 2021
Verified Purchase
I read the complete series and not only enjoyed it but learned somethings. The series was very well researched. The characters become so real you want to find out what happens to them.
Read more
Helpful
Report abuse
See all reviews

R. Johnston
3.0 out of 5 stars I felt short-changed
Reviewed in the United Kingdom on February 27, 2006
Verified Purchase
Having been gripped by all the previous six books in the Zion Covenant series, I assumed that London Refrain would would be of the same calibre. I was rather disappointed.
The flyleaf unashamedly descibes it as 'a "Director's Cut", including a portion of the Thoene Classic 'The Twighlight of Courage' and thrilling, never-before-published scenes with characters you've come to know and love through the Zion Covenant series.' This is probably a fair description except that the book lacks the intensity of earlier Thoene novels. I felt that there were too many characters featured in this book considering the length of it and the descriptions of the characters were lacking; I didn't feel as though I was getting to know them again. It has been some years since I read the previous books and therefore I felt that it would have helped to have been reintroduced to them. In this way, the book doesn't effectively stand on its own. Also, having read The Twighlight of Courage, London Refrain contained few surprises; I already knew 50% of the plot before beginning the book.
All-in-all, I felt rather short-changed.
Read more
11 people found this helpful
Report abuse

Trevor
4.0 out of 5 stars Good Read
Reviewed in the United Kingdom on February 25, 2015
Verified Purchase
Good subplot and pace to the story.
Read more
Report abuse